Why I won't be taking unpaid internships 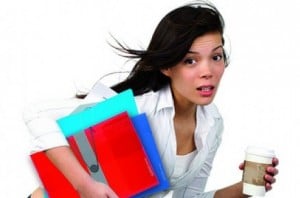 U.S. television host and journalist Charlie Rose recently settled a class-action lawsuit after his production company was accused of failing to pay its former college interns. The settlement will set his production company back about $250,000, with each of the 189 interns walking away with $1,100 each for 10 weeks’ worth of work.

Media executive turned law school graduate Steve Cohen disagreed. In the Wall Street Journal he called the lawsuit “dumb” and the settlement “worse.” He says that companies will now be hesitant to take on interns because it invites the possibility of meddling from labour activists rallying against the notion of unpaid work.

While Cohen admits much of what he did as an unpaid intern was unwanted office grunt work, he says he benefited from the experience of becoming part of the company’s daily routine. He was able to made connections and he learned how to conduct himself in the real world.

I understand the value of that. Learning how to dress for work, getting to work on time, planning ahead and multitasking are skills that build us into marketable employees.

However, I still object to the “unpaid” portion of “unpaid internships.”

Here’s why. Cohen is coming from a place of privilege. By privilege, I mean that as someone with a successful career, he is in a position where things like rent, food costs, and student loans are not in his peripheral vision. Not every fresh graduate has the financial stability he has.

He doesn’t seem to realize his position is the exception to the rule of the broke student. According to the Institute for College Access and Success, the average American undergraduate with student debt finishes owing $26,600. According to a report by the Canadian University Research Consortium, the average Canadian undergraduate with debt graduates behind by about $24,500.

By the time I graduate this summer, I will have $25,000 in student debt. This is a choice I made and I don’t resent the sum, but the best I can do as I approach graduation is respond to job openings hoping someone will see me in the sea of applicants and decide my skills are worth paying for.

I have never taken on an unpaid internship because I couldn’t afford to. I have a younger sister at Ryerson University and a younger brother who just finished applying to universities so I’m in no position to ask my parents for help. Instead, I have two part-time jobs in addition to full-time school.

When my friends in the publishing industry or law school say they are going through unpaid internships, I can’t help but feel they’re being cheated. Like me, they have tens of thousands of dollars in student debt, but their desire to land jobs in their fields far outweighs concerns like food and rent. They take on unpaid work in hopes of  “making connections” and gaining “exposure.”

Trying to save money by hiring unpaid interns instead of real employees is miserly at best and unethical at worst because it prevents people who aren’t privileged from getting experience.

Greg J., a student I know in Ryerson’s business management program, interned at Investor’s Group. He worked as an unpaid intern assisting a financial consultant with filing and preparing documents. Since he had his family’s full financial support, he was able to pick and choose jobs.

“I was offered a paid internship, but I chose to remain in the unpaid job because money wasn’t really a factor to me,” he says. “I felt it would be disloyal to the company to take the paid one, especially because I had a great experience.”

But he also admits that if he had to go through his undergraduate by paying his own tuition, it would have turned him off working for free. “If I had to work through university, then I’d never take one. I would not. I wouldn’t have been able to take an unpaid internship.”

There is some hope. If employers value you enough, they might pay. Sometimes it just takes asking. My cousin Iris Yoo was an unpaid intern at an interior design company. “I was desperate for experience and so I took it,” she says. “Employers are only looking for experienced people, but there are very few opportunities for people who can’t afford to intern for free, and with no experience you’ll never get a chance to be in a junior position.” She felt she was working just as hard as any of the employees, so she decided asked her boss for a small stipend and it paid off. The stipend didn’t change her life, but that was several hundred dollars less to worry about.

Sadly, I suspect my cousin’s unpaid gig was the exception to the rule.

Overall, the idea of unpaid internships leaves a bad taste in my mouth. Those who are financially unstable will not be able to take on internships for the experience they need in their field.

To expect young people to attend expensive post-secondary institutions on massive student loans and then turn around and tell them their only way of making connections and gaining exposure is by working for free in unpaid internships—something many cannot afford—is ludicrous.

Once upon a time, Cohen’s argument may have held. For today’s students, it’s simply unrealistic.

Yuni Kim (@YuniKimchi on Twitter) is an education student at York University. What do you think of unpaid internships? Let us know in the comment section or on Twitter @maconcampus.