Thinking pink and profiting: Women in trades capitalize on gender 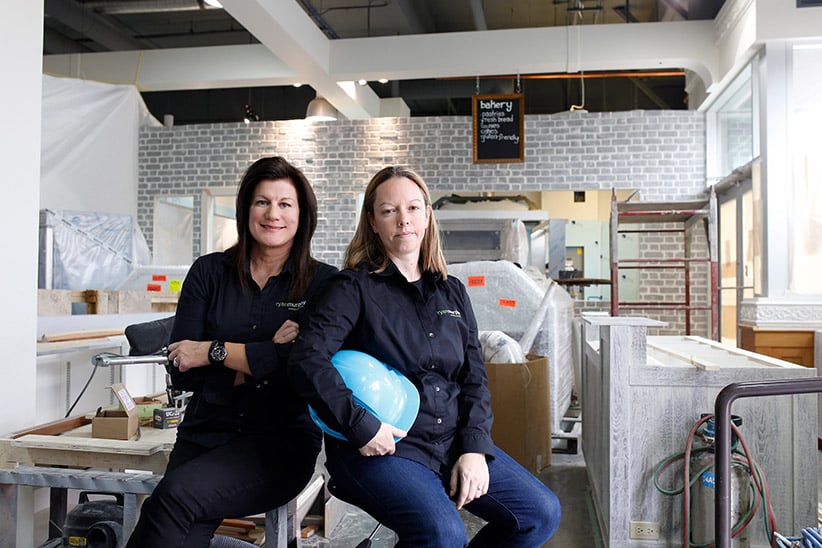 When it comes to making it in the macho world of the trades, a few women are thinking pink and profitable.

According to JudyLynn Archer, president of Women Building Futures, an Alberta-based organization that recruits women into the trades, women represent four to six per cent of workers in the industry, and “that’s very generous.” Archer says numbers are low not because construction is an unwelcoming place, but because it’s often outside a woman’s frame of reference when looking at careers. The biggest issue is not getting the job, it’s more about staying in the job, because she says women often arrive with fewer skills than their male counterparts. “It’s a tough place to work and it’s not for everybody,” she says.

Some women, though, are capitalizing on their gender. Each of the following entrepreneurs are using their influence to encourage other young women to enter the trades. But they have more in common than X chromosomes. A combination of hard work, savvy, and positive mentorship played a role in their success. But the bottom line is they’re good at their jobs.

Hilary Noack was the only woman in her autobody apprenticeship at Centennial College in Toronto for all three levels of the program. So when she was searching for an idea that would set her business apart, she knew she had to start something that would help the few women in her field. “Throughout the years working in the trade, I met a lot of really cool, awesome, talented females, so that’s when it clicked,” she says, about starting Toronto’s first female-owned and operated autobody repair shop, Ink & Iron. “It captures people’s attention. Whether they are saying something good or bad, it’s different,” says Noack, who has been on the receiving end of both praise and criticism, even being accused of discriminating against men.

Most of her clients have been men since she opened up her shop in Mississauga, Ont., in April, and Noack credits the steady influx to her social media presence (her Twitter handle is @autobodybarbie) and crowdfunding efforts: she relied on the website Indiegogo to raise more than $5,000 in start-up money . She earned $10,000 herself by fully restoring a green 1969 VW Karmann Ghia.

Formerly a teacher at Centennial, Noack wants to help mentor young autobody repair technicians, and plans to take on a female apprentice. At a larger shop, it’s easy for a technician to get pigeonholed into doing one repetitive task, says Noack. At her smaller shop she wants to give students an array of learning opportunities. She also knows the importance of having a mentor in a male-dominated industry. “You’ll probably get doors closed in your face. Be strong willed, be persistent . . . you have to have thick skin and just go with the flow.”

You might not expect two women to show up at your door after calling Ryan Murphy for a quote, but that’s exactly what co-owners Karen Ryan and Lara Murphy want. Why the name? “Because it sounds like a man,” says Ryan, point blank. The attention-grabbing name is only one reason that this pair, who have made the Chatelaine/Profit magazines’ W100 list of Canada’s top female entrepreneurs for three years in a row, have made an impact on the Calgary construction scene.

Throughout her history and political science degree at Mount Allison University in Sackville, N.B., Murphy had been doing small jobs to pay tuition through a company she started called Handy Student Maintenance, but her plan was to go to law school. It wasn’t until her Mount A soccer coach pointed out: “I think you could have a multi-million-dollar construction business one day,” that she considered a career change. Murphy moved to Alberta during the economic boom of 2006-07, where she met Karen Ryan on a construction site in Banff. Ryan’s knowledge of the retail and commercial side of the business was a good fit. Together they became the first female-owned and -operated construction company in Calgary that does both residential and commercial work.

Ryan and Murphy have also found a niche working on accessible and barrier-free housing for people with disabilities, something that few contractors do because of complex guidelines and requirements. “Being an office full of women, we are good at the details,” says Murphy. They employ mostly women and a few men, something that happened “accidentally on purpose.” Through the company’s exposure on social media, women—including architects and engineers—have often approached them to become part of a team.

The women are well-received in the community, but “one customer made a comment about a hen party. I just blocked his number,” laughed Murphy. For young people, the Ryan Murphy team stresses the importance of finding a supportive mentor, and communication and collaboration with other women. “It opens doors like I’ve never experienced before,” says Murphy. Most importantly, she says, “know your business, know what you’re doing, and then the respect comes.” 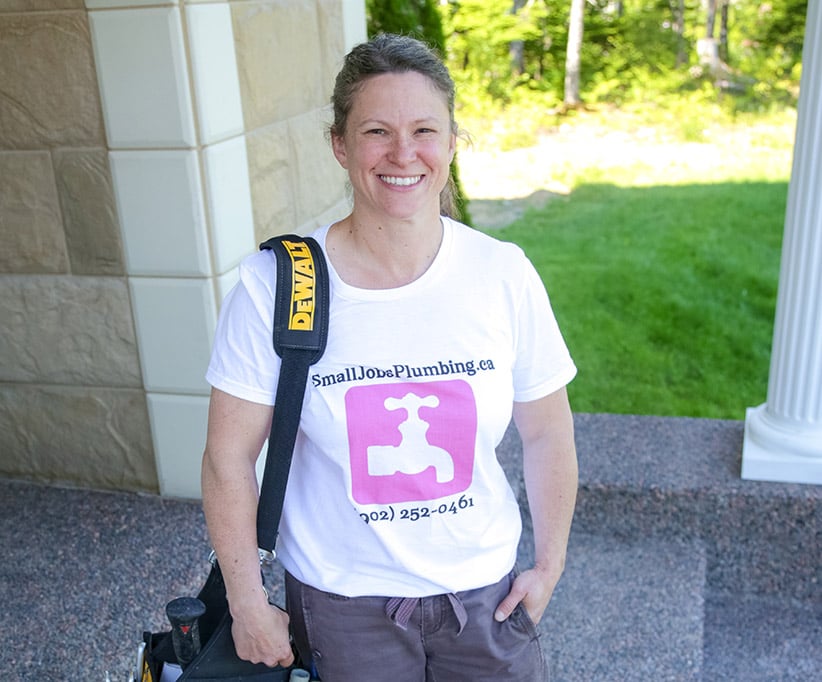 Tammy Buchanan of Small Jobs Plumbing is the only certified female plumber in Halifax. (Lindsay Doyle)

The pink faucet logo of Small Jobs Plumbing was designed “to put a little spin on the plumbing world, the way we all perceive it to be,” says Tammy Buchanan, the only certified female plumber in Halifax. She left a corporate job after 20 years and began an apprenticeship at her brother’s plumbing company, but he could not afford to keep her on for long. Before incorporating the business in 2013, Buchanan faced layoffs, unequal pay, and an eight-month stint of unemployment that shook her family financially. Now she and her business partner, Sherri Lee, have a solid client base and have a strong social-media presence.

“There’s a lot more people out there who are realizing that female plumbers are a great thing,” says Buchanan. “They’re more comfortable and a lot of them are amazed because it’s so rare.” Women have most of the purchasing power when it comes to household tasks, and “nine out of 10 times it’s the female that’s home” during the day when Buchanan makes house calls. The comfort level she provides, along with support from other local female-owned businesses, has contributed to the success of Small Jobs Plumbing.

Buchanan and Lee are hopeful that, with new organizations like Women Unlimited, a Halifax non-profit that offers career exploration courses at Nova Scotia Community College campuses, they will be able to hire more women. Buchanan intends to take on a female apprentice within the next two years, but with such a new business she cannot afford to hire someone inexperienced just yet. In the meantime, she tells young women to suit up, put on their boots and gloves, and find a company who will allow them to do the job for a month. “That will give you a true test.” And a word of wisdom from someone who’s been there. “There are jerks everywhere.”