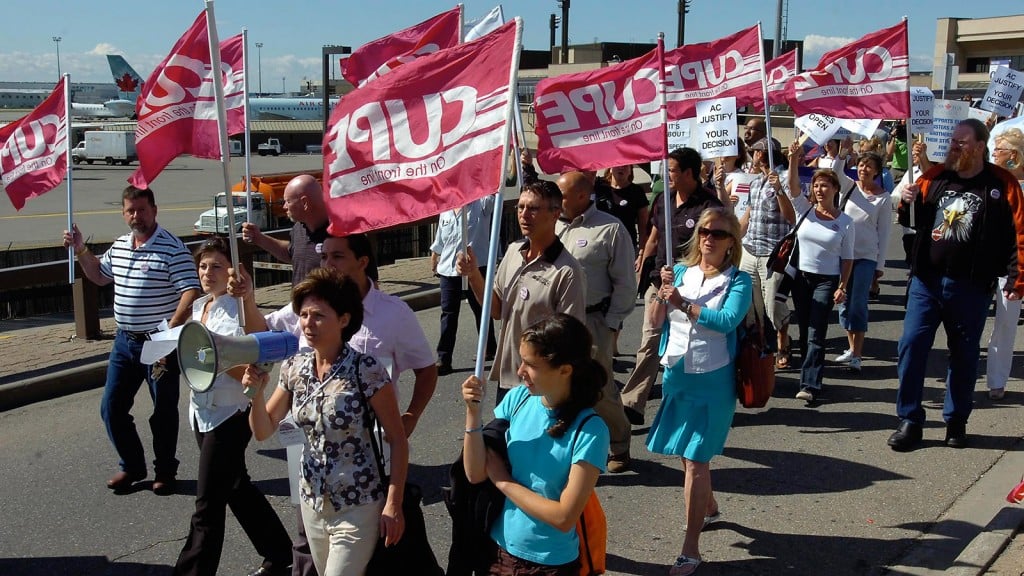 When Jeff Sloychuk was 17, starting out as a summer student reporter at the Alaska Highway News in Fort St. John in B.C., he had no real idea of what a union was—where his dues went, or what he got in return. That changed when a shop steward came to meet him and shake his hand. Now 32, Sloychuk says that initial meeting paid off—he’s an organizer in Whitehorse for the United Association and the United Brotherhood of Carpenters. While acknowledging he’s “certainly young within the labour movement,” he knows the kind of outreach he received is the exception today, rather than the rule. “I got lucky,” he says. “They really treated me like a full member, not a token youth, and I think that’s the problem we tend to have—we just treat [younger workers] as the youth, rather than an equal partner in the movement.”

Workers everywhere, unionized or not, have been buffeted by today’s economy. Where once an employee might hold a job at a single company for life, no one expects that anymore. The nature of work itself is rapidly evolving. A recent report from the Broadbent Institute found that 52 per cent of Canadians between the ages of 20 and 30 believe work for their generation will be made up of a perpetual mix of contract positions interspersed with full-time work. In comparison, the think tank found just 14 per cent of their parents worked in a situation like that.

It would seem to be the perfect environment for unions to appeal to young workers. Indeed, the same Broadbent survey found the majority of millennials, 59 per cent, think weaker unions make good jobs harder to find. Yet unions in Canada have been shrinking—in 1997, more than 21 per cent of private sector workers belonged to unions; by 2011 that had fallen to 17.4 per cent—and a failure to reach out to young workers is partly to blame. “Young people in precarious jobs typically have been non-unionized. They don’t see a union fighting for them, they see themselves as being left aside,” says Jerry Dias, the president of Unifor, the largest private sector union in Canada. “The trade labour union movement has not spent a lot of time trying to organize them, historically.”

When Dias was elected as president of Unifor—formed out of the 2013 merger of the Canadian Auto Workers and the Communications, Energy and Paperworkers Union of Canada—one of his main campaign planks was a commitment to youth outreach. At the union’s convention, he announced Unifor would earmark $10 million to target new workers. It’s also looking to generate more opportunities at the grassroots level, with committees bringing the concerns of young workers directly to the union’s national executive to bring to the bargaining table. Dias also sees student unions as a feeder into the larger labour movement.

Part of the issue is a generational communications gap. CUPE recently contributed to a high-profile TV ad aimed at boosting the image of unions. Paul Moist, the president of CUPE, admits now that was a mistake, because few young people watch traditional TV. As such, they’re redoing the campaign for other formats.

The hierarchical nature of unions is also hurting their reputation among youth. Orion Wilson, a 24-year-old carpenter and construction worker in Toronto, says that when he signed up for his union, the International Alliance of Theatrical Stage Employees, he was told it would be months before he’d be able to find a unionized gig. “It was an old boys’ club, is basically what it was,” he says. “Working for them is great, but the experience I’ve mostly had [is that] the older workers get the pick of the litter for work.”

Dias disagrees with that assessment. “We are a seniority-based organization, no question about it, but to somehow suggest that young people are disadvantaged is nonsense,” says Dias. “Everybody will have their time.”

But with youth opinion slow to shift, new ad-hoc advocacy groups are forming, and they highlight the challenges facing unions. Seeing a need to stand up for the rights of young interns, Claire Seaborn, a 25-year-old law student at the University of Ottawa, founded the Canadian Interns Association in 2012. When it was taking shape, she was well aware of the stigma that unions had among young people and actively developed a distinct model: serving as an advocacy group, but not charging the membership—entirely unpaid—any union dues. “It’s a divisive issue, and we wanted to avoid it,” she says.

But the realities of funding remain an issue for the group, so when Unifor reached out a few months ago to see if the association would be willing to form a partnership—with the CIA effectively being folded in as a union chapter—Seaborn listened. She didn’t like what she heard: her association was told it would have to charge dues and hold in-person meetings, an approach that’s counter to the social-media-driven nature of the group. “They just didn’t seem to understand our approach,” she says, adding that she feels that unions are out of touch. “I just felt a bit frustrated that they were only willing to work with us if we played by their game.”

There is recognition of the problem in union halls. “We cannot sell out the next generation at the bargaining table and think they’re going to embrace trade unionism,” says CUPE’s Moist. “We need to have our eye on the future work force.”