After years of being banned, or worse, Bruce LaBruce earns a New York retrospective 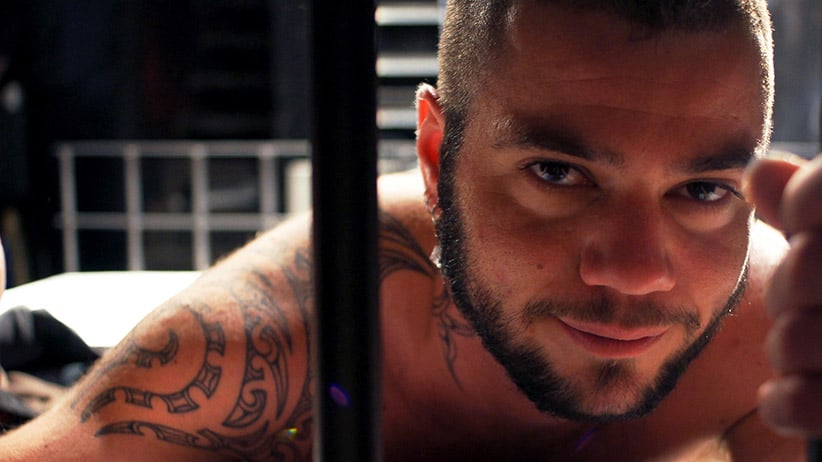 In 1994, Canadian cult filmmaker Bruce LaBruce walked into a film lab in Toronto to pick up his footage. When he got there, the lab owners had called the police. “They came, looked at the negatives and wanted me to cut things out of the negatives—three specific scenes they found unacceptable were bondage, nudity with violence and sucking of toes,” LaBruce recalled recently. (He took the film elsewhere.)

LaBruce has drawn picketers in London, had his films banned in Australia and had bombs thrown into an art gallery where his work was showing in Madrid. At the premiere of his film Otto; or, Up With Dead People at the 2008 Sundance Film Festival, 40 or 50 people out of an audience of 500 or so walked out.

But he’s also undeniably an international success, and now, 21 years after that Toronto incident, he’s having a blood-splattered film retrospective at the Museum of Modern Art in New York, opening April 23. “At a time when queer cinema has become increasingly mainstreamed,” says co-curator Thomas Beard, “his films stand as a vibrant alternative: transgressive in form and content, acute in their political commentary, smouldering with caustic wit.” The retrospective showcases all nine of LaBruce’s feature films—whose content ranges from skinhead sex to gay zombie erotica to alien gore—alongside a program of shorts, offering a window to the world of an underground film pioneer.

The filmmaker grew up on a farm in Tiverton, Ont., with a father who was a hunter. As a child, he recalls being the “sissy,” bullied at school, but when he moved to Toronto, he found homophobia even in the fringe punk scene. “That set the stage for a lot of my work,” he said. “I became really fascinated by taboos and things that aren’t supposed to be represented and the boundary between what you can represent, or aren’t supposed to, as an artist.” He included pornography in his films, he says, because it was “about being totally unapologetic, direct and aggressive about homosexuality.”

He started out working with Super 8 and 16-mm film, splicing film strips in the editing room—“very old school,” he reminisces. His no-budget, ad hoc spirit is evident in his first feature, 1991’s No Skin Off My Ass, in which LaBruce stars as a hairdresser who falls for a skinhead, performing his first on-camera sex scene. “We were so shy about what we were doing, we put the Super 8 camera on running lock so it runs by itself,” he said. “There was no one behind the camera.”

Politically, his films challenged the status quo on issues of class, race and gender, “sometimes in ways that make the orthodox left uncomfortable,” he said. Sprinkled with camp, satire and radical punk characters, they reference no “fixed political position, often expressing meaning through style,” he says. Part of his aim was to bring to light political incorrectness “strategically and with intent, not merely as some knee-jerk or reactionary impulse,” he said.

He was called a racist for his film Skin Flick, in which a mixed-race character is brutally raped. Undercover police officers arrived at the Toronto screening. LaBruce recalls they approached him afterwards, saying they would have charged him with a hate crime, but felt the film didn’t qualify. “Quite often when I was making a film or photos, I would get this feeling I’ve gone too far,” he admits.

Aesthetically, his films retain the rawness of his early years; they come across like high-art B movies. His work has a similarity to that of directors like John Waters, though his favourites are Larry Cohen and Roman Polanski. “I’ve used distancing techniques to make the audience aware of the mechanics of filmmaking, no matter how flawed, and of their own viewership and voyeurism with regard to pornographic imagery,” he said.

But the retrospective opens with his latest feature, Gerontophilia, his most successful film, with a $1-million budget, which has no sex scenes at all. LaBruce says he “wanted to shock people by making a film that isn’t shocking,” so he made an intergenerational romantic comedy. “I explored the pornographic for so long,” said LaBruce. “It’s time to start something new.”