Saleema Nawaz's much-researched book, 'Songs for the End of the World' is haunting, morally nuanced and oddly hopeful 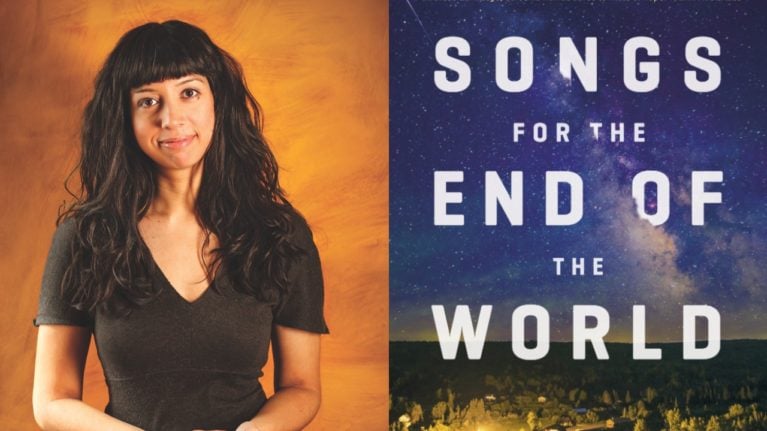 When Montreal author Saleema Nawaz embarked on the research for her new pandemic novel, Songs for the End of the World, seven years ago, it wasn’t because she thought we would all be living that reality in 2020. Nawaz, 41, whose first novel, Bread and Bone, won the Quebec Writers’ Federation fiction prize, “had a lot of characters I wanted to write about in a multi-vocal way” she says, “so I was looking for a structure—a crisis, actually—that would unite them and touch them in different ways.” Nothing fits that bill better than a deadly, fast-moving pandemic, and Nawaz immersed herself in scientific studies and expert predictions. The result, completed last year, is both a lovely novel—haunting, morally nuanced and oddly hopeful—and a remarkably prescient portrait of our current situation. (So up-to-the-minute, in fact, that publisher McClelland & Stewart has released an ebook version four months in advance of the August print run.) From social distancing and conspiracy theories, right down to what is upending our lives—a novel coronavirus—Songs shows we could all have seen this coming.

Q: You really didn’t have to make up much of your background setting, did you?

A: It did not come from me. I read a lot of epidemiology papers that model the spread of viruses. Basically, whatever I could find online. A lot of history—Ebola, the Spanish flu, SARS and lessons learned from the outbreak in Toronto—a lot from the CDC, which has its community-mitigation strategies online, and from various North American cities, which have their emergency preparedness plans for different disasters online. I found papers about the ethical and legal considerations of things like enforcing quarantine or curfews, or how you make [rationing] decisions about ventilators and other medical needs like antivirals.

READ: Books to spark or allay our fears in the time of the coronavirus pandemic

Q: Did you go into the book at the last minute and make any real-time adjustments or is this just as you wrote it months ago?

A: There are no changes to the novel in relation to the current pandemic.

Q: So, all the now-familiar concepts and terminology—N95 masks, for example—which might once have puzzled readers were already present?

A: Yeah, exactly. I remember in the late stages of editing there was a back-and-forth about the term “social distancing,” that possibly it was confusing. Didn’t it encompass all sorts of ordinances against gatherings and so forth, when I was talking about how far apart people had to stand in line at the grocery store? But in the literature about community-mitigation strategies for slowing the spread of communicable diseases, it covered both and I felt it was important to use the real term. I’m very glad now that we did.

Q: As far as prescient novels go, you even have a prophetic novelist character named Owen—it doesn’t get more prescient (or meta-fictional) than that. Spooked by his own decade-old plague bestseller, Owen swings into flight mode, even buying a yacht to take to the open seas. Did you have a do-this roadmap at hand when COVID-19 arrived? Is your boat ready to sail?

A: Actually, I can barely swim. So, I would not want to be out on the water. But I did think I should have had a plan, given how long I spent writing the book. I was kind of puzzled during the first weeks over the fact I felt just as puzzled as my characters. I didn’t react like Owen, more like Sarah, worrying over, “Do I take my kid out of daycare?” Even knowing what I already knew there was, is, still that very human sense of denial or slow acceptance. Something else, too—I think was also trying to react against the way that Owen behaved. I bought a month’s worth of food and sort of ensconced myself at home with my family like everyone else.

Q: Let’s go through some of the very close—even perfect—parallels between Songs and contemporary life. ARAMIS (acute respiratory and muscular inflammatory syndrome), your fictional disease, is caused by an airborne coronavirus that originated in China, just like COVID. Why?

A: SARS came from China, and what happened in Toronto with SARS was uppermost in my mind when I was writing. We seem particularly susceptible to coronaviruses.

A: There’s the imaginative spell that New York casts over a lot of us, but mostly its population density. It seemed like a place where it could happen. Also, I moved the epicentre to the States rather than Canada, because I wanted to explore the idea of society breaking down under it and the way things could go wrong. It seemed more believable to set it in a society that was already a bit more fractured and less trustful of government. And has access to guns.

A: I wish that was something harder to predict, but yes.

Q: And, naturally your story has conspiracy theories, rumours and fake cures, although the president of your U.S. doesn’t flog any on national TV.

A: That’s just another proof that reality is always stranger than fiction.

Q: Living through the pandemic has been a matter of daily uncertainty and change, from death counts to questions of what is shuttered and what is open. Reading your novel has the much the same effect. Three-quarters of the way through comes a brief moment touching on a now-dominant issue, when the mayor of Austin tearfully apologizes for re-opening his city too soon, kick-starting a second wave.

A: That was a big topic in the literature, something that happened in the Spanish flu epidemic, 1918 to 20. In general, because the flu behaved differently in different cities according to how quickly people responded and the measures they had taken, the second wave was worse than the first. More people died in the second wave. Reopening is always a risk.

Q: Just to damp down any conspiracy theories about your story, I want to note it’s not entirely the same as the COVID pandemic. There’s the ferocious 35- to 40-per-cent fatality rate in Songs, for one thing, and the fact Canada is case-free until we allow American headliners at a Vancouver benefit concert for U.S. victims.

A: Yes. Certainly now that I have thought about it more, this benefit concert is not something that would have been allowed in our current reality, thank goodness. Wishful thinking, I guess, that Canada would remain case-free for so long, both from me and the [fictional] authorities, since, as the book shows, the virus was already present in Canada and the concert gave it an opportunity to spread very quickly.

Q: One of the key elements in your novel is how your characters, although unmoored in a world of mounting chaos and death, are not, for the most part, yielding to fear and despair.

A: When I was considering a setting for my linked characters, I thought about disaster movies and dystopian books, and the sense they often have of a society breaking down. It’s true that a serious crisis really shows us the cracks in society and the disparities that are already present. I just didn’t really believe that would happen, or have to happen. But there is this way in which stories about things shape our beliefs about those things and then our beliefs shape our actions. So there are expectations of what would happen in a situation if we all believe that everyone else is going to behave terribly. It wasn’t my primary impulse in the book, but I did want to explore writing a better blueprint of how we can get through a crisis like this.