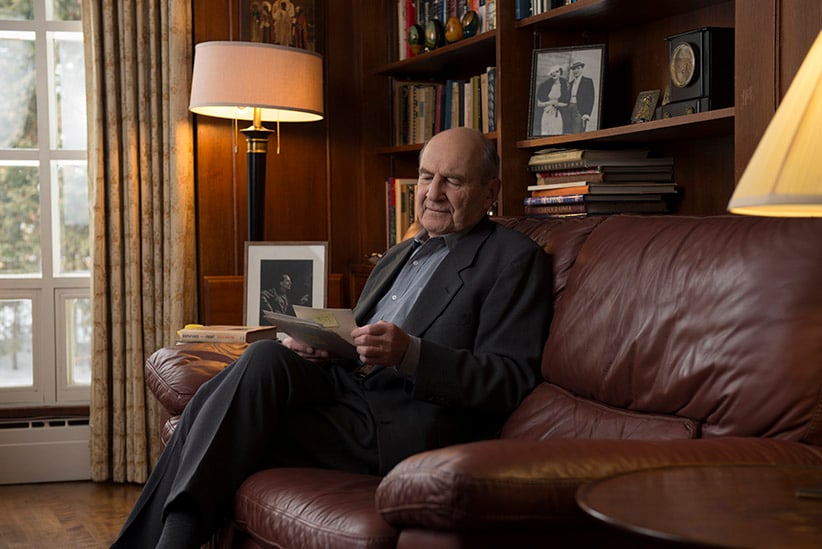 It was a decade ago when David Halton first thought about writing a biography of his father, Matthew, arguably Canada’s greatest foreign correspondent, after he retired from the CBC and his own distinguished career in his father’s profession. To some extent, it was a search for something interesting to do, says Halton, now 75, but mostly a nagging worry that Matthew was disappearing from memory, “part of Canadians’ tendency to collective amnesia, the way we forget the past and its high achievers.” There was no lack of material, Halton knew, from the “two or three long letters he sent my mother every week,” to the 90-odd interviews a would-be biographer had collected decades ago, many with people now dead. “It was more discovery than memory,” says Halton, who was only 16 when his father died: “In personal terms there was the heavy drinking and just how many affairs he had; professionally, I hadn’t realized how high his international profile was.”

Matthew Halton was a giant in his field, not only a familiar voice to wartime CBC listeners, but winner of an American broadcasting prize and among the “six best war correspondents” named by the British Newspaper Proprietors’ Association in 1944. In Dispatches from the Front, a book as even-handed and dispassionate as one of his own reports from Washington and a nominee for the $25,000 RBC-Taylor Prize, David Halton captures his father’s achievements for another generation. We present an exclusive excerpt below:

On an early spring day in 1987, Zilla Soriano, a student of journalism at Ryerson Polytechnic Institute in Toronto, made her way into the archives of CBC Radio in an old mansion on Jarvis Street. Her professor had assigned her to a research project on Matthew Halton, a World War Two broadcaster whose name until then was as unknown to her as it was to most of her classmates. Closeting herself in a tiny audio booth, she began listening to dozens of his tapes piled in front of her. The first was an eyewitness account of entering Berlin on VE Day, May 8, 1945. “Four out of five buildings … had been destroyed—that is, completely levelled or completely gutted. This did look like the end of the world … Through the rubble and ashes of Berlin I didn’t recognize famous streets I had known well … We were lost for a few minutes in that utter ruin and silence … I was afraid.”

It was the same voice, as she would discover, that had a riveting impact on a generation of Canadians. For me, it was simply my father’s voice—not much more than a passing curiosity for a five-year-old boy at war’s end. For millions of people, though, it was the voice of Canada at war—more familiar on the home front than that of any of the country’s politicians or generals. Halton’s broadcasts, chronicling the victories and losses of Canadian soldiers along the Maple Leaf Route from Sicily to Nazi Germany, were part of the country’s wartime experience.

Seven years after his death in 1956, at the age of 52, Matt was still being hailed as “without question Canada’s greatest foreign correspondent, both as a writer for the Toronto Star and, after 1943, as a reporter for the Canadian Broadcasting Corporation.” The son of struggling English homesteaders in rural Alberta, he was to embark on a remarkable journalistic odyssey through the turbulent first half of the 20th century. It was a journey that put him on the front lines of many of the major political and military events of the era. He was in Berlin on the day Hitler took full power in Germany and—long before most other correspondents—began a prophetic series of reports warning that the Third Reich was “becoming a vast laboratory and breeding ground for war.”

For the rest of the decade he chronicled Europe’s drift to disaster, covering the breakdown of the League of Nations, the Spanish Civil War, the sellout to fascism at Munich, the Nazi takeover of Austria and Czechoslovakia. Along the way he interviewed Franklin Delano Roosevelt, Hermann Göring, Neville Chamberlain, Charles de Gaulle, Mahatma Gandhi, and dozens of others who shaped the history of the century.

It was a career that brought him international acclaim of which few journalists can even dream. Today though, Matthew Henry Halton is a more or less forgotten name for all but survivors of the wartime generation. This biography hopes to reawaken interest in a Canadian legend.

Excerpted from Dispatches from the Front, by David Halton. Copyright © 2014 David Halton. Published by McClelland & Stewart. All rights reserved.