The hilarious afterlife of... Adolf Hitler? 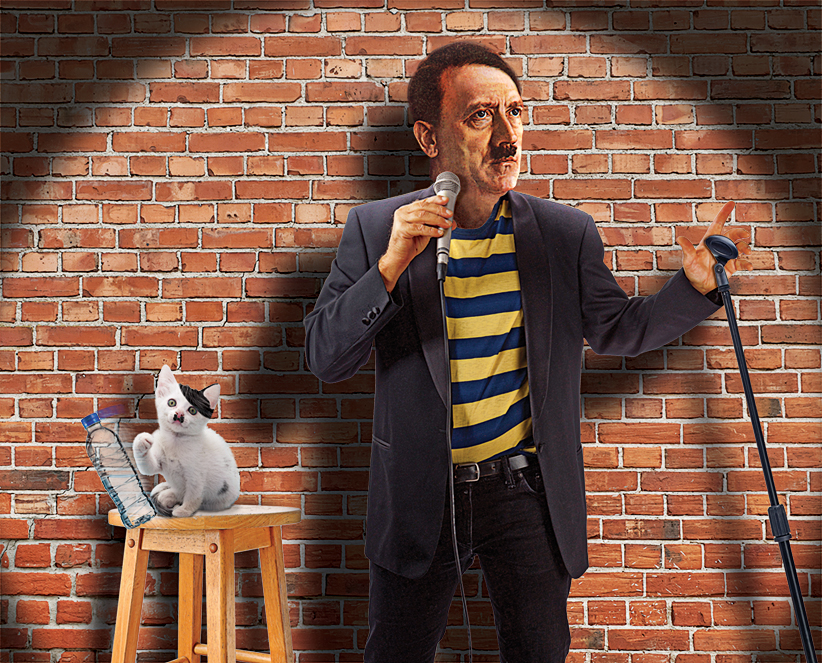 It’s 2011 and, like the “sleeping kaiser” of German fairy tales, fated to rise up in his people’s hour of need, Adolf Hitler awakens in a vacant lot in Berlin. Reeking of gasoline, suffering from a splitting headache, with no memory of the “night” before—except for pulling out his revolver to show Eva—Hitler has no idea how he got where he is, let alone why Berlin is still standing, given his orders to the contrary. But, summoning up his willpower, the Nazi leader rises to his feet and sets off, determined once again to lead the German people. He’s willing to start as a stand-up comedian.

“Ah, no, no, don’t pay any attention to that Brothers Grimm story,” says a clearly perturbed Timur Vermes, author of Look Who’s Back, which has just arrived in North America after selling 1.5 million copies in Germany since 2012. Speaking over the phone from his Munich home, Vermes adds, “I wanted to have some fun as a writer, and to show how this powerless crank rose to power, by continually garnering attention and the help of people who saw their own profit. Not about people wanting him back. No. Although I did expect more of a discussion. But the copies sold and sold, and I realized there would be none—just whether the book was funny or not.”

And, with that, the 48-year-old author puts himself squarely within the zeitgeist, that useful German concept, not as a shaper, but as a product of the times. For this is the age of the omnipresent and often hilarious Hitler, right down to an ad for a South African agribusiness—a poster featuring an egg sporting the most iconic hair-and-moustache combination ever known, and the tag line, “History’s produced a lot of bad eggs: Thankfully, ours are always good.”

In the West, Hitler’s new afterlife is primarily online. Sites showcase unfortunate cats who resemble the führer (they’ve been named Kitlers), or feature the Hipster Hitler comic strip. Visitors can peruse Hitler fan fiction (“Jesus and Hitler: a romance”) or collections of things that look like him (including houses), or play the game Six Degrees of Hitler. And then there are the rants—Hitler’s spittle-flecked oratory has spawned numerous cinematic representations, none as memorable as actor Bruno Ganz’s virtuoso performance as a raging dictator in Downfall (2004). It’s been parodied so often on YouTube—Hitler learns his pizza will be late, Hitler is locked out of Xbox—that the list-obsessed Internet has duelling collections of Top 25 Hitler rant parodies. There’s even one where Hitler rants about all the Hitler parody rants.

Despite the crimes of Nazism, it’s easy enough to see why we (or, at least, those of us not directly affected by those crimes) find Hitler mockery funny. Incongruity—a man whose rants sent millions to death camps turns his rage on a late pizza—and laughing cuts monsters down to size. It’s all part of what Gavriel Rosenfeld, a historian at Fairfield University in Connecticut, calls a “Möbius strip” of response to the Nazi past, in his new book Hi Hitler! The demand to judge it in moral terms—a unique evil, a never-again warning for the future—waxes, wanes and interacts with the desire to normalize it as just another of history’s cataclysms, a war fought with unparalleled ferocity on both sides, and marked by a genocide like too many others. “These trends come and go in waves,” points out Rosenfeld in an interview. In the first decades after the war, while Germans were fixated on rebuilding and disassociating themselves from wartime acts, the Western Allies were celebrating victory in a just war.

The era saw triumphant war flicks such as The Longest Day—the film that gave a seven-year-old Vermes his first awareness of “this strange guy whom no one dared wake up. Remember that scene, where the Allies have landed and the general won’t tell Hitler? It’s stuck in my mind ever since.” And, for all our agonizing over whether enough time has passed for Hitler jokes, there were a considerable number of humorous treatments even then. Some were broad enough for network TV (Hogan’s Heroes, set in a German POW camp, where the recurring punchline was Sgt. Schultz’s voice-of-the-nation “I know nussing”), some as transgressive as The Producers (the Mel Brooks film that featured, among much else, a song that opened “Springtime for Hitler and Germany / Winter for Poland and France”) and some simply British: In Monty Python’s “Mr. Hilter” sketch, John Cleese’s fugitive führer, lightly disguised, is running in a by-election from his hidey-hole in a Somerset boarding house.

But mainstream American film and TV has produced nothing as daring (or funny) since. “The moralizers were dominant from the 1970s up to the turn of the century,” Rosenfeld says, as the meaning and true extent of Nazi genocide—not only the Jewish Holocaust but the fate of gypsies, gays and others—sank into public consciousness in the West. As it did in Germany, where the generation of student radicals who roiled Western Europe in 1968 was not about to let the responsibility of its parents’ generation pass unquestioned.

The current phase of Hitler fascination picked up speed early in this century, with the spread of the Internet and, Rosenfeld notes, the passing of “the perpetrator and victim generations.” We have been in “a transitional phase,” he argues, “but I’d say the normalizers are winning now. We’ve learned to expect every Nazi reference in popular culture to be tongue-in-cheek.”

Yet the trends continue to react to each other: “Demonization, which means virtually abandoning any attempt at understanding the past, sparks the mockery, but also humanization—Hitler as our designated ranter-in-chief for all of life’s little problems—which brings on the moralists.”

Those moralists will find much to enrage them in Vermes’s novel. It is funny, even if the jokes take on a predictable feel. Like all time travellers who move forward, the führer—call him Rip Van Hitler—wrestles, to comic effect, with mobile phones and the Internet. (Wikipedia, he immediately deduces, is obviously the Aryan work of Vikings, spelled with a “W” in German.) Miscommunication gags run throughout, with Hitler and his interlocutors almost never managing to talk about the same thing.

That sort of humour reaches its peak when Vermes executes what he calls “the national safety protocol.” Just before Hitler is about to go on stage for his first televised gig as a comic, the producer calls him over to make sure everyone is on the same page. “We are all agreed the Jews are no laughing matter?” she asks, meaning she expects a dead ringer for Adolf Hitler to rant about anything other than Jews. Hitler, of course, feels he’s met a fellow anti-Semite who realizes the Final Solution is no joke, and heartily agrees.

But this bumbling, comic Hitler doesn’t hold a patch, in revisionist terms, to the new trends in academic history cited by Rosenfeld in Hi Hitler! and by Richard Evans, a Cambridge historian and specialist on the Nazi era. His new book, The Third Reich in History and Memory, emphasizes how historians’ approaches affect our cultural memory of a rapidly receding past and, hence, our response to future events—and features Evans’s responses to what he judges excessive “normalizing.”

Does German colonial policy before the Great War, for example, with its brutal suppression of African populations, point the way—and thus make unexceptional—Nazi policy regarding Jews? No, argues Evans: German colonialism resembled that of other Europeans, none of whom turned on domestic minorities with the same ferocity. Evans further counters those who claim the Nazi dictatorship lay lightly on a supportive German population by detailing the violent suppression that accompanied Hitler’s seizure of power in 1933. But above all, he marshals arguments against historians who think the scale and intensity of the Holocaust had any real parallel elsewhere.­

A cartoon Hitler, precisely because he is essentially an Internet meme, can never have the normalizing power of an attempt to integrate the Nazi era into the broad sweep of European history. Vermes’s führer, a comedian-politician who “kills” after he gets on YouTube, is cartoonish, too: someone who kickstarts his political career by picking up on popular causes like vegetarianism, or denouncing dog dirt in the streets. (The latter position seems to have a peculiar resonance in right-wing populism; chasing down stoop-and-scoop scofflaws was a major issue for Nigel Farage’s anti-immigrant U.K. Independence Party in the May 7 British election.)

Hitler’s profession is perfect for a Vermes novel, because of the latitude for trangression, given modern-day jesters. Consider Oliver Polak, a German and Jewish comedian who has an act, “Jew or normal,” in which he throws out random names—Steve Jobs, SpongeBob—and has the audience shout back “Jew” or “Normal.” Then he moves on to himself, working the crowd up to chants of “Jew, Jew, Jew,” before silencing them with the punchline: “No, I’m normal. I’m just doing it for the money”—as devastating a skewering of anti-Semitism as can be imagined.

Compared to that ironic and transgressive act, what’s a few jokes, scrubbed clean of Holocaust references, about Adolf Hitler?