Jon Stewart’s genius for finding humour in the banality of evil makes its way to his directorial debut, 'Rosewater'

It’s no secret that Jon Stewart, television royalty and host of Comedy Central’s The Daily Show, hasn’t had much luck in the film world. The 51-year-old comedian’s career, pre-TV, was defined by a series of cinematic flops. In Half Baked (1998), Stewart plays a character called the “enhancement smoker,” a pothead who is convinced that marijuana renders everything better. “You ever seen Scent of a Woman on weed?” he asks his rather annoyed drug dealer. In Big Daddy (1999), he plays the forgettable straight man to Adam Sandler’s lovable loser, and in 2002, he starred in the universally panned comedy Death to Smoochy, a role he still jokingly laments taking. (His only scene in 1996’s The First Wives Club—as one of Goldie Hawn’s lovers—ended up on the cutting room floor.)

During his hiatus from the big screen, the comedian conquered the small one, becoming TV commentary’s most authoritative voice (according to one poll, Americans trust the satirist anchor as much as NBC news anchor Brian Williams). This year he returns to film not a bit player but a giant. His directorial debut, Rosewater—adapted from Iranian-Canadian journalist Maziar Bahari’s 2011 book Then They Came For Me—premiered at the Toronto International Film Festival last week to moderate yet surprising praise.

Rosewater tells the story of Bahari’s wrongful arrest at the hands of Mahmoud Ahmadinejad’s regime, and his subsequent 118-day interrogation in Tehran’s notorious Evin prison. The journalist (portrayed in the film by Mexican actor Gael García Bernal) was covering Iran’s election for Newsweek in 2009 when he was arrested as an alleged American spy by a group of high-ranking government thugs. Bahari had recently appeared in a spy-themed segment of The Daily Show—evidence, according to the Iranian government, that he was colluding with the CIA and Mossad. 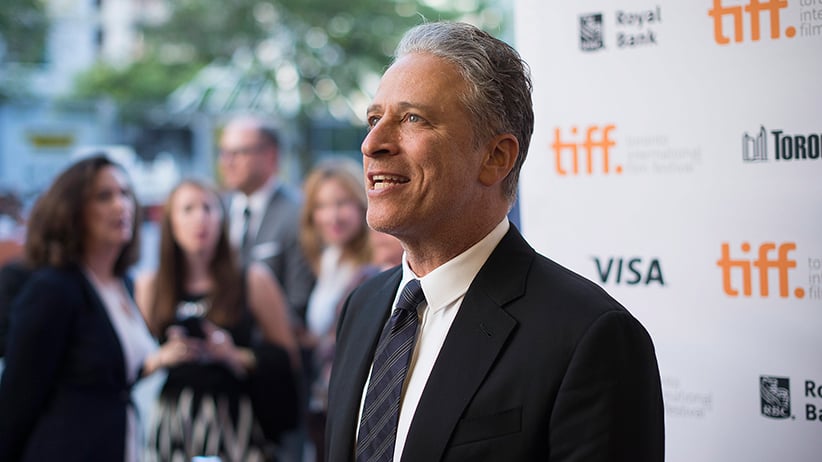 “The Iranian government does not have a sense of humour, but they are funny,” Bahari told Maclean’s. “They think they know everything, even though many in the government are utterly ignorant about what’s going on outside of the small rooms where they beat people up.” Stewart’s film brings this ignorance to life with a chilling combination of brutality and humour: we see Bahari distract his sexually repressed interrogator with ﬁctitious tales of sexual escapades in New Jersey (also Stewart’s home state), framing the state as a mecca of Western hedonism. When interrogators give a physically and emotionally tormented Bahari a rare opportunity to phone his pregnant wife in the U.K., he is told over his own sobs that he must not forget to “dial 9 to get out.” Stewart said this was one of his favourite scenes to direct, possibly because it captures succinctly what the comedian does so well. He has a knack for finding humour in the banality of evil. “I’m going after the things [they think] make them look strong and authoritative,” he says. “Those are the things that undermine their authority.”

This illusion—weakness masquerading as strength—is at the core of Stewart’s work; it’s what he’s satirized so masterfully on TV nearly every night for the last 15 years, be it about Iran, Russia, or the U.S. That’s not to say Rosewater is masterful. Its first half, in which we follow Bahari and his Green Movement chaperone around Tehran on the back of a motorbike, is exciting. But there are only so many places a story can go when its protagonist becomes stationary. The flashback device gets tired quickly. So do the conversations with deceased loved ones. (Bahari gets so many pep talks from his father’s apparition, you begin to wonder if you’re watching Dexter).

Rosewater, suffers, like Peter Jackson’s Lord of the Rings trilogy, from excessive denouement syndrome: it doesn’t know when to end. But viewers may not care enough to say so. At TIFF, it was surprisingly difficult to find anyone eager to give the film an unkind review, even if they admitted to finding it unremarkable in places. It may be that Stewart’s enormous goodwill with viewers has turned him into some kind of entertainment Leonidas. Rosewater won’t succeed because it deserves to, but because we’re pulling for its creator more than its subject.