Downton Abbey Devotees recap: That Christmas-special scene between Mr. Carson and Mrs. Hughes? The most perfect of the series. 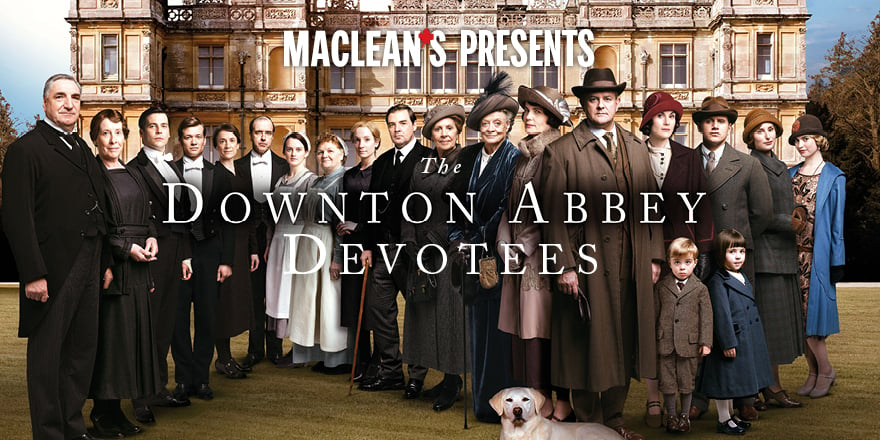 SPOILER ALERT! The Downton Abbey Devotees of Maclean’s are talking about the season finale of the fifth season. Flee if you don’t want to know what happened, even if it includes, in our opinions, the most wonderful, bestest-with-sugar-on-top scene of the entire series. Truly, madly, deeply.

You have been warned.

Patricia: I normally loathe the Christmas specials. For North American fans wondering, “What’s up with the Christmas title?” let me explain: On the original British channel ITV, the season finale is shown months after the other episodes. For boffo ratings, it airs on Dec. 25, hence the title. Downton isn’t alone, most big dramas go all out for the holiday.

That being said, they are usually drivel that bear only lip service to their relation to the plots and pacing of the previous episodes. Last year, the family was in London at Grantham House (yes, they have a grand pad in London that we’ve never seen before) where Rose was presented at court and they got to save a royal from scandal. Since my colleague wrote a diatribe on last year’s, I’ll let her vent now.

Genna: Don’t remind me about that abomination. As I explain at length here, Christmas specials should always, without exception, be Christmas-y. Last year’s was set in April. Strike one. Two, the creators of the show decided to introduce a character, then put him in peril, in the same episode. They didn’t give me time to care about him. Strike two. Three, the character was the real-life prince of Wales (the future Edward VIII) who we know did not go down in a conflagration of scandal in 1922. Strike three, you’re out. Sigh.

Well … let me add one caveat. That Christmas special sucked with the exception of one moment, one magical seaside moment featuring a certain middle-aged pair that we will have a lot more to say about today.

Patricia: Our expectations were rock bottom. But we should have had faith in Julian Fellowes (we take a second to curtsy and offer our deepest apologies for doubting him). It took five seasons, but this episode is absolute perfection.

Right from the start, there was a frisson, a sense of magic in the making.

Characters that have been out-of-sorts for far too long were in fine form. Edith slams her grandmother with an often-hidden wit: “You don’t usually have much trouble complaining.” Then Thomas lets off a zinger aimed at Mr. Bates, who is despairing about imprisoned Anna. “I would cut my arm off, if I thought it would do any good,” moans Bates. “I don’t think that would be sensible, Mr. Bates. We can’t have you wobbly at both ends,” Thomas retorts.

And then…there is the deepening relationship between Carson and Mrs. Hughes, sharing left-over upstairs wine, debating whether to buy an investment B&B together.

Genna: I didn’t see it coming. I really didn’t. Mr. Carson asked Mrs. Hughes, “I wonder if I might have a word later, if such a thing were possible?” And that escalated quickly to…. 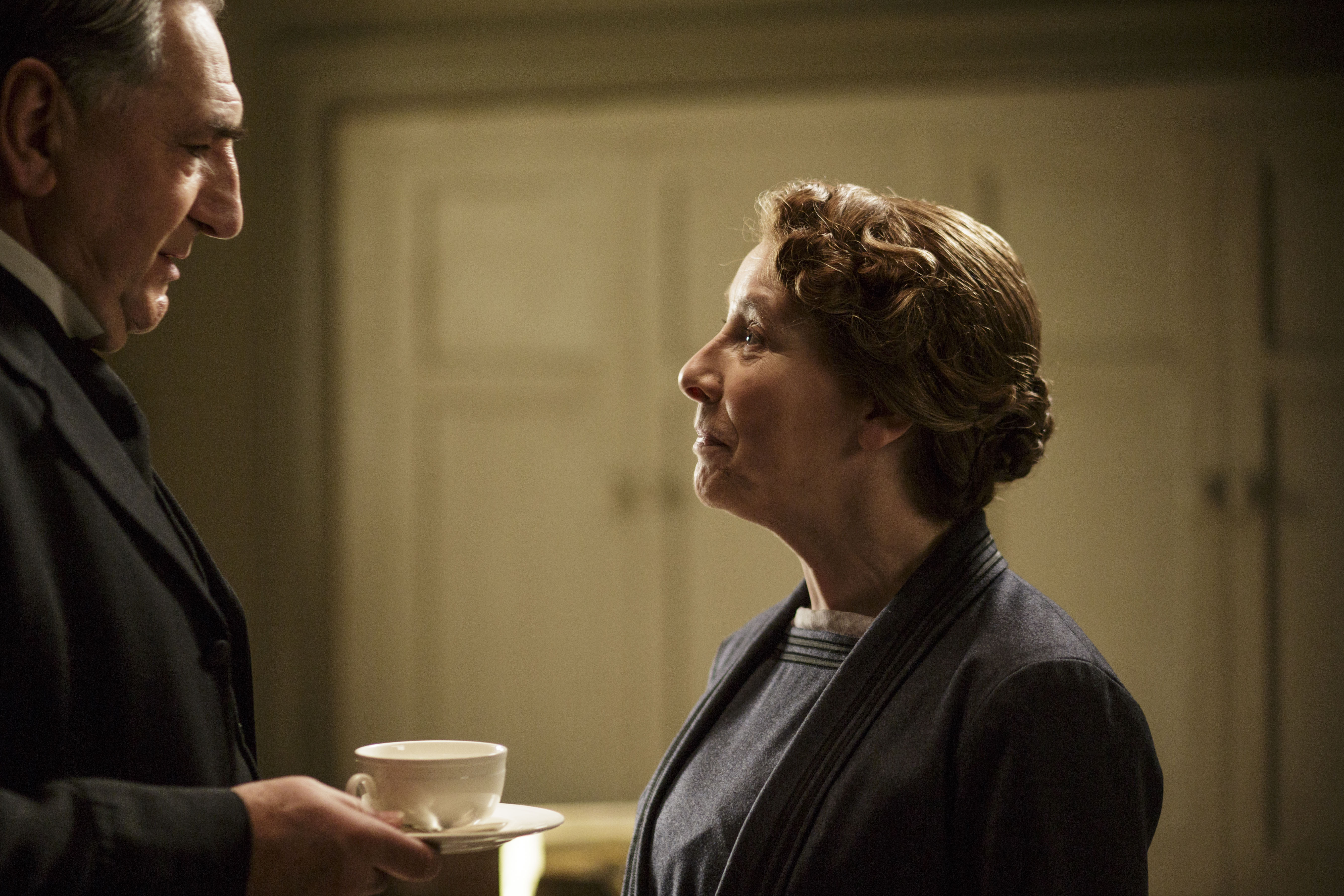 Wait a minute, I’m getting ahead of myself. A little background: As I half-suspected, Mr. Carson had been hoping that if he got Mrs. Hughes to invest in a property with him, they’d be hopping onto a slippery slope to marriage.

But Elsie Hughes threw a wrench into his well-laid plans. Turns out she has a sister with a disability that she’s been supporting all this time, and hasn’t saved a penny for real estate ventures or anything else. She can’t go halfsies with Mr. Carson on a house.

But then he finally gets that moment alone with her, during the Christmas festivities. He tells her— JOKES—he registered the house in both their names, even knowing she’s a pauper.

Mrs. Hughes: “Who knows what the future will bring, or how much longer we’ll even be here? Suppose you want to move away, and change your life entirely? You don’t want to be stuck with me.”

And a SQUEE rose up among Downton fans from all corners of the world. It’s happening! It’s really happening! They’re getting married!

I screamed. I cried. I rewound the video and watched stolid old Mr. Carson tear up over and over again. And I heaved a collective sigh of contentment with the Downton nation.

And then I got to thinking. Why now? Mr. Carson and Mrs. Hughes have been co-captains of Downton’s ship for 20 years at least. As Mrs. Patmore says, everyone knows that Mrs. Hughes has had the dear old butler wrapped around her little finger at least that long.

I think the answer’s simple, and it can be found in this fantastic documentary series I recommended last week. In 1924, modernity was in full swing. Where servants were previously supposed to be asexual, devoted like celibate nuns and monks to their masters, by the mid-20s attitudes had changed (and the profession of domestic service was in precipitous decline). And so a marriage that would have been considered unspeakably improper suddenly seems to everyone like a natural next move.

Patricia: Even thinking of that proposal scene between Mr. Carson and Mrs. Hughes makes my eyes well with tears. It was simply perfect.

But wait, that’s not all…

With all of Lady Mary’s wishy-washy suitors from last season either driven off (Lord Gillingham) or rejected and shuffled off to Poland (Charles Blake), the series needed a dashing leading man, and one who is strong enough to balance our ice princess. Enter Henry Talbot. He’s smart, confident and not at all blinded by Mary’s beauty. He’s got a fancy car, so presumably there is money. But who cares? The chemistry between Lady Mary and Talbot is fiery from the start.

Oh, and did I mention that he’s played by actor Matthew Goode (The Imitation Game, The Good Wife)? Genna can have Atticus, I’ve got dibs on Matthew Goode’s characters (No, not the actor. He’s got a partner. That’s creepy. I have boundaries!). First with Alicia Florrick of The Good Wife, and now Lady Mary, his characters are going after not one, but two cool, intelligent brunettes.

Everyone needs to write a letter—using a fountain pen on proper letterhead paper—to Julian Fellowes that he makes Talbot a regular. Now! After all, he figures out the “Let’s get Stowell” players in record time. 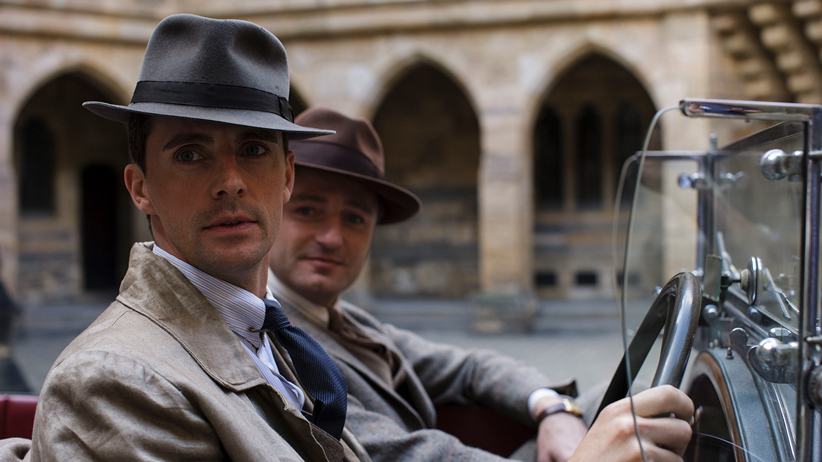 Genna: Hooh dear. Trust Thomas Barrow to take a scheme too far. Mary Crawley asked him to embarrass Lord Sinderby, Atticus’s father, and after the old prig calls Barrow a “stupid fool” during a spat at dinner, the dastardly underbutler eagerly takes up the challenge. Long story short, holier-than-thou Lord Sinderby’s mistress and love child show up at the door, having received a telegram asking them to come at once and that baby daddy would be there alone to greet them.

Rose saves the day. She passes off “Diana” as an old school friend, sprinkling a little fairy dust here and there as she goes and simultaneously landing herself in her father-in-law’s good books forevermore. Lady Sinderby, who is sweeter than pie, is the only one oblivious.

Speaking of obliviousness, I knew Tom Branson was capable of counting to nine. He was well aware of little Marigold’s parentage all along. Lord Grantham finally has a heart-to-heart with Edith about it too, and forgives her flooziness once and for all. Now it’s just Mary in the dark. Or does she know, and just refuses to let anyone be more interesting than her?

Patricia: Thomas can never take a scheme “too far” in my books. He’s been gunning for Sinderby’s butler, Stowell, from the moment the Crawleys arrived at Sinderby’s rented castle for a week of shooting. (For those wondering why the pile looks so familiar, I have two words for you: Harry Potter.) First the officious prig corrects Thomas by pointing out he’s just the “temporary valet” to Lord Grantham. And he knows of the Anna murder charges. And Thomas will have to act as a footman while there. And he knows Branson’s Fenian background. You can almost see Thomas’s revenge impulse control melting.

When Lady Mary decides to knock Stowell down a peg for his treatment of Branson, she turns to Thomas, who relishes the project. First he manipulates events so Stowell is balled out by his boss, then gets him drunk so as to pump him for damaging information for the second act, involving Sinderby’s mistress (see above).

Everything goes absolutely perfectly in the end. Stowell is taken down a few pegs, Sinderby learns to appreciate Rose, and Thomas gets delicious blackmail information (you KNOW he’s going to use it later).

But alas, not everything works out for Isobel Crawley and Lord Merton. Oh, his sons are completely horrible snobs who can’t put aside their class prejudices so that their father can finally be happy with his love, the wondrous Isobel. The scene where she calls off the engagement is short, restrained and heartbreaking.

Genna: Lord Merton is such a babe. I’m so put out that he’s leaving. I hope he and Isobel can work it out somehow. The only problem is his insufferable snobby sons!

Mr. Fellowes, I would like to special order a Downton tragedy for the Brothers Merton, please. Chop chop! Oh, and while I have you, I demand a spin-off: Rose and Atticus Take New York. (Yes, my favourite blonde couple, one-half of which is Britain’s biggest dreamboat, are apparently sailing away from the big house forever). 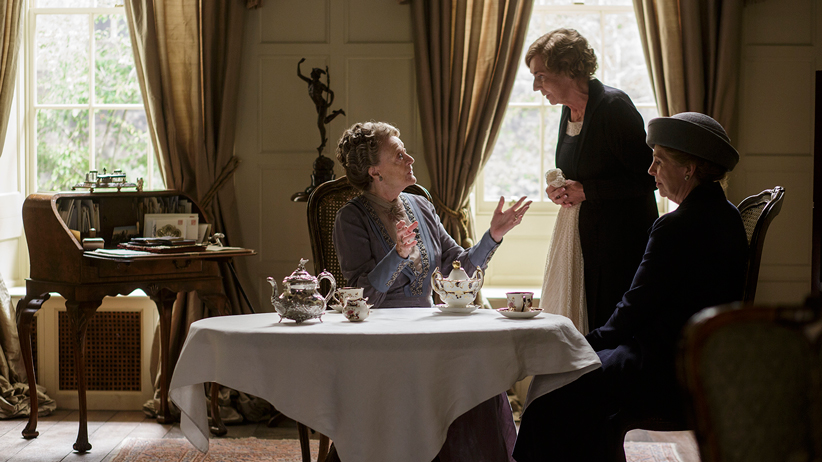 Patricia: Lord Merton and Prince Kuragin are gone, leaving the dowager countess and Isobel with nothing to do but give all a season recap, in case you drifted off (why would you…..they were GREAT romances, including an “immoral proposition” for the dowager. ) (Update: I initially, incorrectly wrote “immortal proposition”—the dowager would not have been impressed)  (Genna: Oh. My. God. Patricia you buried the lede in this one. Did you catch this conversation? Grannie Vi was a vixen in her day! Isobel: “And you never strayed again?” Violet: “I never risked everything again. Isobel: “That’s not quite what I asked.”)

Genna: Obligatory update: Anna and Bates are both out of prison and singing Christmas carols together. Let’s never talk about this again.Great, that’s settled! 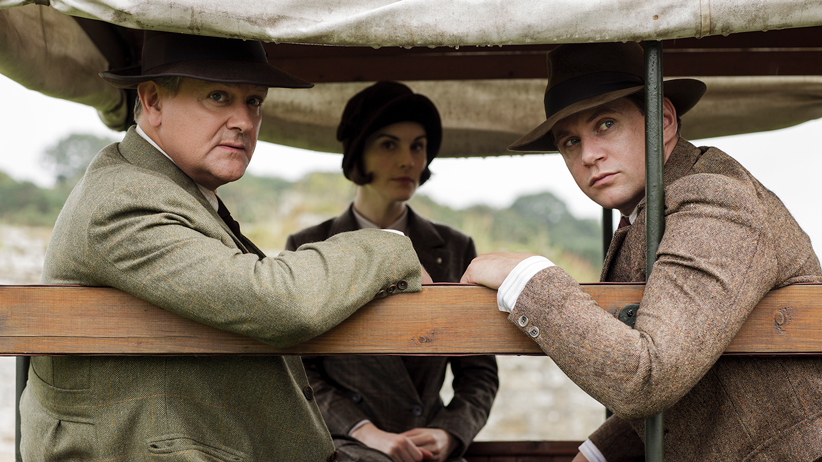 Patricia: Finally Branson is going to Boston. Sniff. Sniff. He got a grand send off, befitting a true Crawley, for that’s what he is now. He may have been a poor Irish chauffeur, but now he’s an adored member of the family. They make that poor butler’s life hell because he won’t accept Branson as an “upstairs person.”

Genna: I’ll have my eye on Moseley and Baxter next season. Those two cutie pies put on their Sherlock and Watson routine and questioned all the publicans in York until they found the one who could confirm Mr. Bates’ alibi on the day of Mr. Green’s murder.

New theory: The snot-nosed little valet is actually some kind of kingpin, and his murder is part of a huge web of underground criminality and intrigue. Because Scotland Yard does not launch a two-year investigation after a junior manservant dies from stumbling into traffic. Who. Is. Mr. Green?

Patricia: I hope that Daisy gets a good romance. If it’s good enough for Lady Mary, then it’s only fair for our cook on her self-improvement kick. And then there is Henry Talbot (swoon).

Farewell! This has been a delight.

We’ll leave you with the words of Carson’s reverberating bass…”tidings of comfort and joy,” until season six!