The episode itself was a bit of a mess, but what about that jewellery!

Oh poor Edith! She just can’t get married. First she falls for Patrick Crawley (the first heir and Mary’s fiancé who dies in the Titanic), then John Drake, the unacceptable farmer (married and not of her class) during the war. And her timing is awful: so many men were slaughtered in the battlefields of the First World War that women outnumbered men by nearly two million in the 1921 census. And those men who survived were often horribly scarred. But Edith isn’t one to give up. She goes after Sir Anthony Strallan a second time (older sis Mary nastily dashed their first romance). Who cares if he’s older by a decade or two and has an arm crippled by the war? She gets her man to propose so she can, for once, be the centre of attention. Of course it ends in disaster. (For a traditional recap of the episode, read Michael Hogan’s fun piece on the Huffington Post.) 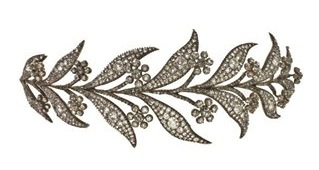 While the episode itself was a mess—wasn’t it amazing that Lavinia saved the Crawley home by forgiving Matthew, in writing no less, on her deathbed!—it’s full of the best feature of Downton Abbey: clothes and especially jewellery. This time, we get a second viewing of the family tiara, last worn by Mary at her wedding. Then, helpfully, we get a third when she tries to rip it out of her hair after Strallan dumps her at the altar and a fourth when Anna, the maid, nearly steps on it while trying to console Edith.  This isn’t just any headpiece but a “beautiful garland of leaves and cloral clusters, pavé set with old-cut diamonds,” states The Chronicles of Downton Abbey, that has been “worn by numerous Crawley brides in the years since its creation in 1830.” In reality, the headpiece is a loaner from Bentley & Skinner of Piccadilly in London, which has royal warrants from the Queen and Prince Charles.

That isn’t the only tiara in the Crawley vault. The countess and dowager countess regularly pop on diamond headpieces when they’re entertaining, while Mary is fond of a large sparkly brooch-like hair piece. The idea of wearing family tiaras most nights of the week might seem positively Victorian, but it was the custom back then. Indeed, Queen Mary was never without one for her evening meal. And they are notoriously difficult to sit correctly on the head, though some regular wearers have it down to a science: Queen Elizabeth II can reportedly put on her favourite while running down the hall.

For aristocratic families it wasn’t, and indeed still isn’t, surprising to have one or two tiaras that have been passed down from generation to generation. When Countess Stephanie de Lannoy married the hereditary prince of Luxembourg last year, she opted for her family tiara, rather than go digging through her mother-in-law’s amazing collection. And Camilla, duchess of Cornwall, wears her family’s tiara on occasion.

Though nowadays they are still seen most frequently at royal events, such as the Ruby Jubilee for Denmark’s Queen Margrethe, aristocrats do haul them out for weddings and big balls.  When Lady Tamara Grosvenor married Edward van Cutsem, a friend of Prince William and Prince Harry, she was able to pick from what can only be called a treasure trove of valuable headpieces. There were so many that the authoritative jewellery and fashion blog, the Royal Order of Sartorial Splendor devoted an entire page to the collection. Lady Tamara picked one similar to the Crawley tiara that had been designed and made by Carl Fabergé. (Her father, the fabulously wealthy duke of Westminster, grew the family collection when he bought a Russian parure—tiara, necklace, earrings etc—for his bride in 1978.)

And though many of them are set with old-cut diamonds, they aren’t cheap. A late Victorian natural pearl and diamond tiara can be yours at Bentley & Skinner for $150,000. Still, it can be converted to a necklace, so that really cuts the “tiara” price in half.  Most tiaras are multifunctional because, really, you can’t wear one to every event. The Crawley one can be separated into two brooches. Even royal pieces come apart. Sophie, countess of Wessex has a diamond and aquamarine tiara that is regularly worn as a necklace. And they aren’t frozen in time. The Australian crown princess of Denmark, Mary, altered a historic ruby set to make it more versatile. (There’s even a book dedicated to the alteration–and yes I’ve bought it for my collection, even though it’s in Danish.) At the Luxembourg pre-wedding gala, she stripped the necklace of its fru-fru (scan down to the bottom of this page), though that’s a temporary change.

And for those of us who are a tad tiara crazy for even Downton Abbey, a new blog has popped up to help with our cravings.

It’s called A Tiara a Day.