The mania for Ruby Rose on 'Orange Is the New Black’ has sparked an odd backlash, writes Emma Teitel 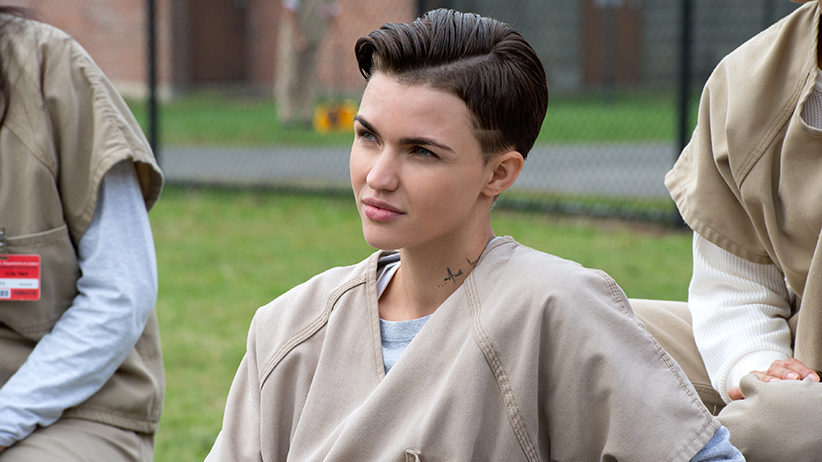 Orange Is the New Black, the hit Netflix series about a wacky women’s prison in New York, was revolutionary when it premiered in 2013. Not only are its main characters gay and bisexual women who don’t miraculously turn straight or die horrible deaths before the show’s first-season finale (still the fate of many lesbians on TV), their co-stars represent nearly every creed, size and sexual proclivity. And they aren’t the stuff of stale tropes or cheap jokes. Even Suzanne “Crazy Eyes” Warren, the creepy yet lovable savant who takes a liking to Piper Chapman (the series’ insufferable lead), is a developed human being with a backstory full of familial alienation and, surprisingly, Shakespearian English. Netflix released the third season of OITNB this month, and it’s just as revolutionary as the show’s first, albeit for a very different reason.

That reason is Australian model and DJ Ruby Rose, the tall, tattooed, otherworldly beauty who plays Piper’s new love interest, Stella Carlin. Rose, 29, resembles an androgynous Angelina Jolie; she is a rare combination of angular and soft. She is a badass with a permanently arched brow and a Justin Bieber haircut. In other words, she is the lesbian James Dean. And straight women are falling madly in love with her.

Rose, who identifies as gender-fluid (she uses female pronouns but identifies as both male and female) began “trending” on social media last week, not only because she spoke candidly about her own gender identity in the press, but because women—predominantly straight women—could not stop proclaiming their affection for her. The tweets poured in with a passion and syntax usually reserved for One Direction defector Zayn Malik: “I want Ruby Rose 2b my GF”; “I’m gay for Ruby Rose”; “When u think ur straight but then Ruby Rose comes and confuses you.” News outlets began declaring, as the Huffington Post did, that “Straight women are saying they’d ‘go gay’ ” for the OITNB star.

But where there is earnest devotion, smug disapproval follows. And, in predictably ironic fashion, some of the people most eager to rain on the Ruby Rose lady-loving parade were none other than lady-lovers themselves, some of whom took umbrage at the notion that one can “go gay” at the drop of a hat, or, in this case, the arch of an Australian model’s eyebrow. Social media lit up with tweets admonishing the Ruby Rose fanatics: “All it takes is a pretty face to change your sexual orientation?” and “Saying you ‘go gay’ for Ruby Rose reinforces the idea that sexuality is a choice, and is homophobic.” In the words of one scold, Madeleine Davies, writing in Jezebel, “Homosexuality and bisexuality aren’t identities that you get to try on for a day to show off how liberal you are. They’re built into a person’s biology. So please, while you—a straight girl—are free to have a crush on whomever you want, do everyone a favour and calm the f–k down. You don’t get a cookie for finding a woman attractive.”

It seems some in the LGBT community hoard their sexual identities the way hipsters hoard bragging rights to the success of a cool band they discovered ages ago. (“We liked women with androgynous haircuts before they were cool!”) This response suggests that our newly progressive world—one of supposedly collapsed sexual boundaries—may not be so progressive after all. One must either reject the norm (heterosexuality) or embrace it full force.

Which is a shame. Because sexual exploration is a lot less daunting when labels are malleable. Homosexuality and bisexuality aren’t, as Davies writes, “identities you get to try on for a day,” but the world would be a better place if they were.

The Ruby Rose backlash is predicated on the belief that, when straight women toy with labels that gay women wear seriously, they bolster the odious theory that sexuality is a choice. Perhaps they do. But an unintended score for conservative dogma is a small price to pay for sexual liberation.

The key to a tolerant and sexually flexible society is not in jumping down people’s throats when they play fast and loose with labels. It’s in letting everyone define their sexuality on their own terms. A word of advice for my fellow lesbians: Relax. There’s enough gay to go around.

FILED UNDER: Editor's Picks Orange Is the New Black sexuality