Most NHL broadcasters don’t look like Harnarayan Singh. They haven’t done what he has to get there, either. 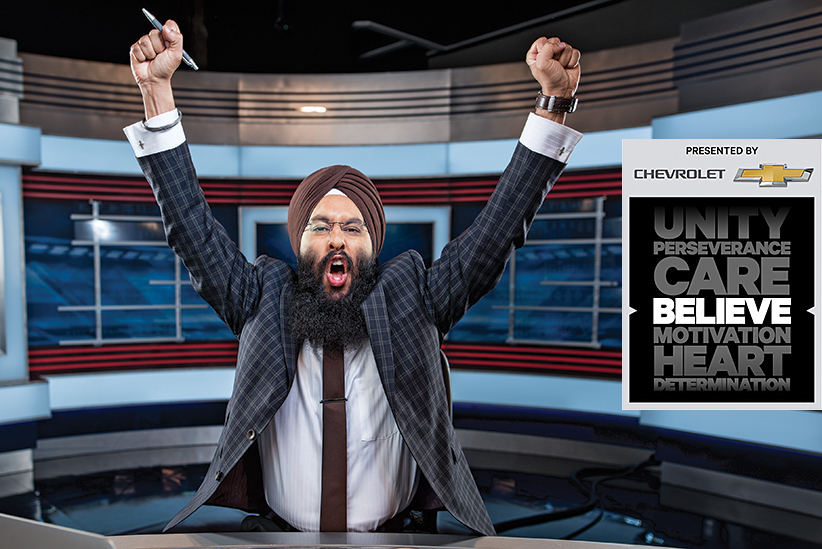 In 2008, Harnarayan Singh was living his lifelong dream of doing play-by-play on Hockey Night in Canada—and he was doing it in Punjabi, no less. He had proven wrong the people who’d told him he would never be hired as an NHL broadcaster. But he was keeping a big secret.

The producers at HNIC: Punjabi Edition had told Singh that to be a part of the show he would have to move from Calgary to Toronto, as there wasn’t any travel budget. “I told them, ‘Don’t worry I’ll be there,’ ” says Singh. But he didn’t relocate, or quit his day job as a local radio reporter. “Basically I became a travel expert. I was the guy you wanted to talk to about flight sales, the best time of day to fly. I had Excel spreadsheets. I was buying tickets months in advance when there was a seat sale.” His weekends often looked like this: take the red-eye from Calgary Friday night, get to Toronto early Saturday morning, rent a car, go to the studio and prepare for the show, call two HNIC games, drive back to the Toronto airport around 1 a.m., beg the maintenance staff to turn off the noisy floor waxers, sleep on a bench, and head to the gate when security opened at 4 a.m. “I kept it hidden for so long,” says Singh. “I didn’t want anyone to know that I was coming out on my own dime, because I didn’t want them to think I was a lunatic.”

Singh is now in his ninth season calling NHL games [in 2016]—and making the sport he loves accessible to the Sikh Canadian community. The show has moved to Vancouver and he still commutes from Calgary, where he lives with his wife and daughter—although travel expenses have been taken care of for a few years now. He also hosts a weekly online video feature, in Punjabi, for Calgary Flames TV, and at a 2016 Hometown Hockey event in Calgary he joined his idol, Ron MacLean, for a TV segment. “There wasn’t a Flames anecdote that Harnarayan couldn’t tell me,” says MacLean, whose first hockey-broadcasting job was with the Calgary franchise. “He grew up with hockey and that’s apparent in his work.” The way Singh, 31, describes it, he’s lucked into this very exciting career. But it’s more accurate to say he and his family never stopped believing that when you have a passion for something the way Singh does for hockey, you should follow it—and not let any obstacle or anyone else’s opinion hold you back.

Singh’s parents, Santokh and Surjit, immigrated from India to Brooks, Alta., in 1966 (population 3,000 at the time) and worked as teachers for many years. “My dad tells stories about how people had never even heard of a turban let alone seen one at that time,” says Singh. “I know my older sisters experienced racism, but by the time I was going to school, the population was 10,000, and my parents had established themselves as honest, hard-working people.” 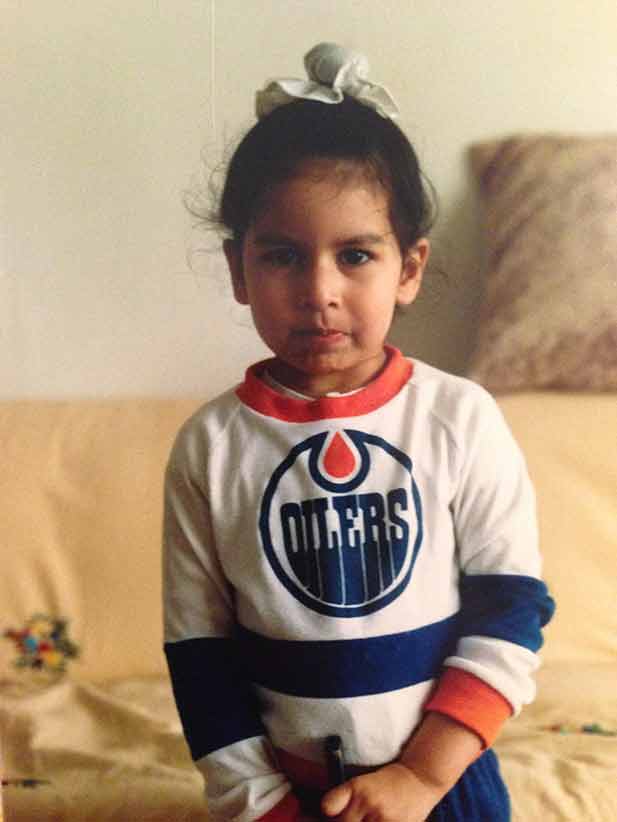 His three sisters were huge Edmonton Oilers fans and they passed along their passion to him. “As soon as he could talk,” says his sister Gurdeep, “he was running around commentating: ‘Gretzky passes to Kurri, passes to Anderson, back to MacTavish.’ We kind of got used to watching the game from behind him.” He used a Fisher-Price microphone with a stand to put on his own version of the NHL Awards, and the siblings competed against each other in best-of-seven playoff table hockey games. Wayne Gretzky was a fixation, almost another member of the family. “On our birthdays my parents would make an offering and a sweet pudding,” says Singh. “On Jan. 26, Gretzky’s birthday, I would tell my mom, ‘We have to make the parshad [sweet pudding] and do the prayer for Gretzky.’ She’s such a good sport, she’d do it.”

Growing up, Singh’s classmates would sometimes ask about his turban or traditional bracelets—but more often they quizzed him on hockey stats. He recently ran into a grade-school friend who remembered Singh writing the numbers 0 to 100 on a page and matching hockey players’ names to jersey numbers. Another former classmate posted a comment on a Sportsnet video featuring Singh: “I remember in elementary school talking hockey with you and you said you were going to work for Hockey Night in Canada. You had big dreams. You did it!”

But, as a kid, Singh had his doubts—which were amplified by some naysaying adults. Singh’s father once told their family doctor that young Harnarayan wanted to be a hockey commentator. “The doctor looked at me,” recalls Singh, “and said, ‘Are you serious, do you understand how long it takes for people to achieve that? A lot of times they are 50 or 60 years old. Plus, look at everybody on TV, they don’t look like you.’ ” Singh’s parents were quick to reassure their son that you can’t put all your hopes and dreams aside because of what one person says.

The doubts persisted in broadcasting school, as professors and others in the field tried to steer him toward news instead of sports. He went to Mount Royal University in Calgary because its broadcasting students had won TSN internships. But when the time came to apply, Singh hesitated, unsure if he was the type to even be considered. This time, Gurdeep came to the rescue.

“That’s the whole reason you went to this university, you have to do it,” Singh recalls her saying. “We filled the portfolio with pictures of me as a youngster, with the Fisher-Price microphone and the hockey pajamas—and painted this story of a kid from Brooks who wanted to be a broadcaster.” He got the internship, and subsequently a job at TSN, but was being groomed for a behind-the-scenes position. “I just thought if I don’t give the on-camera side a shot,” says Singh, “I’m going to regret that.” He went back to Calgary and worked as a reporter at CBC Radio covering local news—and pitching sports stories whenever he could. That’s where he met his mentor, Kelly Hrudey, the Edmonton-born NHL goalie-turned-sportscaster. It was Hrudey who recommended Singh for the HNIC Punjabi role.

Over the years the NHL in Canada has been broadcast in Italian, Mandarin, Inuktitut—but only Punjabi stuck. According to Singh, the Sikh Canadian community (roughly 450,000 strong) has embraced the sport and the show for a number of reasons. “One of the first things people told us,” says Singh, “was that they have better relationships at their workplace now they can talk about last night’s game.”

He’s been surprised by the number of grandparents in the show’s fan base. One Punjabi-speaking grandmother approached him in tears, saying that before she became interested in hockey her English-speaking grandchildren had never spoken to her. Singh also hears from parents who are putting their sons and daughters in the sport. He’s shown them that you “don’t have to lose your heritage and culture to take part in Canadian heritage and culture.”

Despite the show’s popularity, it has been cancelled twice in the past, due to lack of a sponsor. During one hiatus, Singh opened a seasonal Calendar Club kiosk in a Calgary mall. But his viewers weren’t about to move on—there were online petitions and calls to the CBC and local politicians. Both times the show was resurrected. Since Rogers took over the NHL rights in 2014, the Punjabi broadcast has been run out of the Omni studios in Vancouver. It’s now shot in HD and there is space and resources for a pre- and post-game show.

Nine years in, Singh and his analyst co-hosts—Randip Janda, Bhupinder Hundal and Harpreet Pandher—continue to find ingenious ways of melding a Canadian game with all aspects of Sikh culture. When a team comes back from halftime with a little more zip, they say in Punjabi, “they must have had a good cup of chai tea.” They call the penalty box “the box of punishment.” And the way Singh calls a goal—by drawing out the scorer’s name for an exceptionally long time—has become legendary. “It relates to Punjabi music,” says Singh, explaining that holding a note like that is called a heyk. “I do a long heyk on the goal-scorer’s name. I try to beat out the buzzer in the arena, at least.”

MacLean, for one, is impressed: “I love the humour on the show. Singh has a wink in his eye. But his love and admiration and respect for the players are also part of the appeal. This is a guy who said a prayer for No. 99 every Jan. 26.” While Punjabi prospects, including up-and-comer Jujhar Khaira, and hosts are doing their part to bring diversity to the game, Singh still has something prove. His sights are set on the English version of Hockey Night in Canada. “It would further everything that has happened with the Punjabi show, it would break down even more barriers,” he says. “With how I look and who I am, this wouldn’t have been possible in any other country in the world. If an opportunity on the English side does come up for me, it would speak to what a fantastic country Canada is.”

In partnership with Sportsnet