Real Housewives of Vancouver: Going out with a bang

Our recap of the season 2 finale 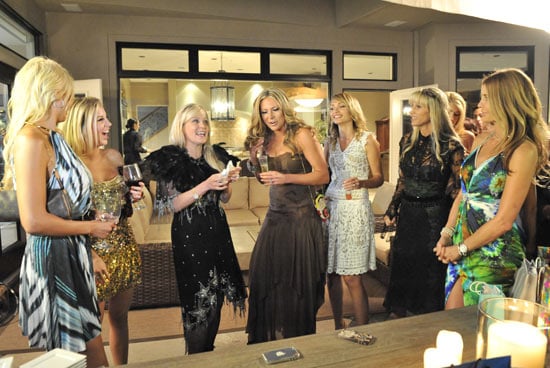 Feeling much how I imagine Andy Dufresne does in Shawshank Redemption when he frees himself from prison, but not before one last trek through a sewage pipe, I settled down to watch the Real Housewives of Vancouver Season 2 finale last night.

Amanda has come a long way from the beginning, when she could barely pronounce Kombucha, and is now ready to launch her line of the sweet fermented tea. She decides to throw an Alice in Wonderland-themed party at VanDusen Botanical Garden for the occasion and invites all of the Housewives.

“Mary can be a mushroom. They grow in sh-t,” declares Jody, who plans on dressing as the Queen of Hearts, obviously.

Meanwhile, Mary consults with her matchmakers to see which suitors they’ve picked out for her. Bachelor 1, a suave Italian; Bachelor 2, an old-school gentleman with a penchant for skinny-dipping; and Bachelor 3, a tall 50-year-old (seriously, that was his entire description), don’t make the cut. The reason? They’re mere millionaires whereas Bachelor 4 is a billionaire, or as matchmaker Jane says, “he’s the whole package.”

With that out of the way, it’s time for the tea party. Amanda stresses about the decorations for a bit, but it’s really the guests she should be worried about.

As the ladies roll in dressed in costume, it’s clear that they’ve likely never even picked up a Disney picture book version of Alice in Wonderland, let alone the Lewis Carroll classic.

Jody’s “Queen of Hearts” is hardly distinguishable from her daily Kindergarten ballerina attire, and the others just look like they’re wearing generic Halloween costumes; Amanda’s boyfriend Kyle is a rabbit, Mary is a rabbit, Ioulia is probably a rabbit.

Ronnie at least acts the part of the Mad Hatter, or maybe just someone who’s been sniffing glue. After swigging some Champagne — “Why not?” (Um, maybe because you’re an alcoholic, just sayin’) — she chats up Mary, who Jody is in the midst of heckling.

“I’m trying to save you from Jody,” she says, much to Mary’s confusion. “I feel like we’re married or something, where did we go wrong?”

Mary barely knows how to start answering that question, but responds by asking Ronnie why she blabbed about their alleged one-night stand.

Ronnie admits that she should have kept their personal lives private. She also accuses Robin of drugging her at her birthday.

All the while, Jody’s nails-on-chalkboard screech fills the background as she calls for Ronnie to cease the conversation with Mary. It’s enough to make even the most peaceful person wish they had a Taser handy.

Further incensed by a hug that takes place between the two former friends, Jody gets up and physically drags Ronnie away from Mary. Then she essentially has a psychotic episode, screaming that Mary is “a piece of sh-t!”

“You don’t have fillers in your face? You look like a Martian!  You’re a piece of sh-t, Zilba! I’m glad you got f–ked in your life, you’re a hooker!”

Mary tries to stand up for herself, saying that she won’t tolerate any more of Jody’s insults, and everyone else has terrified expressions that are reminiscent of the prom scene in Stephen King’s Carrie. Even Amanda is crying, but Jody, looking more and more like a haggard version of one of the stars of Toddlers and Tiaras mid-tantrum, rages on. She finally explodes, “Go f–k yourself!”

Mary makes an exit, and things quiet down with Ronnie, Amanda and Mia all biting their tongues. Jody declares that she feels much better and demands a piece of cake and champagne. Frankly, I was surprised she didn’t ask for the blood of a unicorn.

Mary seems to be learning from her mistakes, though, and manages not to dwell on the insane clown posse for too long. She instead focuses on getting dressed for her date, and settles eventually on a deep purple ensemble with ample cleavage.

The moment of truth arrives and it turns out her bachelor is none other than W. Brett Wilson, investment banking mogul and former judge on CBC’s Dragon’s Den.

The setting of the date, Seasons in the Park restaurant, is nice, but everything else is pretty cheesy. Brett surprises Mary with a wraparound bracelet/necklace from his company and presents her with his book, Redefining Success: Still Making Mistakes. I would think that bringing your own book to a first date would be one of those mistakes, but Mary just giggles and the date seems to be the start of a successful arrangement.

There are a couple other minor exchanges. Ronnie confronts Jody about her utter ridiculousness, but Jody doesn’t see any problem with it, being the narcissistic cow that she is. And Mary fills Robin in on how everyone believes she drugged Ronnie.

Then it’s time for Ioulia to shine at an art show she’s putting together, which she describes as a make-or-break moment for her career as a curator.

With plenty of bubbly flowing, she works the crowds and manages to sell off her pieces, priced between $500-$30,000.

Although she’s invited all the Housewives, she warns, “If these women disrespect my event, I’ll ask somebody to escort them out.”

Shockingly, it doesn’t come to that.

Robin confronts Ronnie about the roofie accusations and Ronnie immediately gets her back up.

“You’re going to call me out on every little thing?” Actually, lying about being drugged is kind of a big thing and Robin is right to call her out on it. Ronnie doesn’t make a scene though, and leaves with a relatively tame, “F–k you, f–k you all!”

Mary also approaches her nemesis, Jody, claiming that she’s not a vindictive person and never meant to hurt Jody.

Jody asks Mary to say she’s sorry, and it almost looks like the two might call a truce. Then Jody breaks the spell, remarking, “You have bad breath.” Still, Mary feels it’s significant progress compared to when she almost got murdered at the tea party.

It’s hard to believe that these women’s lives are actually worthy of any more analysis, but the show ends by providing little updates for each of the cast members.

Jody is still the same (and a great example of what poor parenting and never hearing the word “no” will do to a person); Amanda’s relationship with Kyle is over; Ioulia has ditched her Porsche, condo and rich husband since shooting wrapped up; Mary is launching a beauty line; Robin hasn’t recorded anything with Mary but they’re still friends; Ronnie “is done messing with Texas, the rest of the world better watch out though.”

As a Vancouverite living in Toronto, I will miss seeing amazing shots of hometown scenery in this show and absolutely nothing else.