Real Housewives of Vancouver have a train wreck trip in Toronto

A Top Chef taping, singing on TV and some cosmetic surgery: all in a day's work 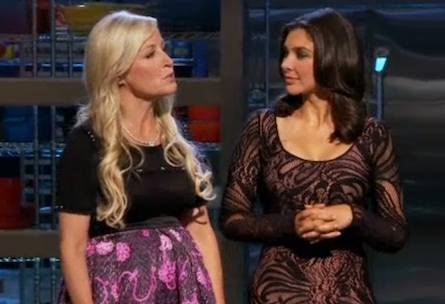 Jody with Lisa Ray on the set of Top Chef Canada

This week’s Housewives begins with a coincidence that would only ever occur on reality TV.

Mary’s agent informs her that she’ll be kicking off a press tour to promote her album and the first stop is — gasp — Toronto. This, of course, aligns perfectly with Jody’s TO trip to guest judge Top Chef Canada.

Out of the kindness of her heart, or maybe because she just wants friends, Mary invites Robin to sing background vocals during her performance of Hero on Global Toronto’s Morning Show.

Robin replies, “That would be the most exciting thing ever in my life.”

Really? I thought these women were meant to be Oprah rich.

Meanwhile, Jody lands in Toronto and surprises her son Josh while he’s at school. Josh’s facial expression betrays a mix of shock and horror, though Jody is likely used to getting those looks wherever she goes.

Next up, Ronnie and Amanda pile into a private jet and head out east as well. Amanda catches up with her sister Denise, and gabs about her boyfriend Kyle.

“I’ll still want to screw him when he’s 90 but he might have to have a junk lift.”

She then muses about how she might want to get her own privates worked over into “prom queen” condition.  Denise responds by offering her sister a butt lift at the cosmetic surgery clinic where she works and Amanda invites Jody and Ronnie along.

Jody’s daughters Mia and Hannah blindfold her and shove pastries in her mouth in a taste test to prep her for judging Top Chef. Her guesses of “nutty chocolaty” and “lemon zest” weren’t all that impressive.

When it’s time to film the segment, Jody has some trouble taking direction from the producer, but figures it out in the end. She and host Lisa Ray trade compliments about each other’s fabulousness, which I’m sure took a fair bit of acting on Ray’s part. 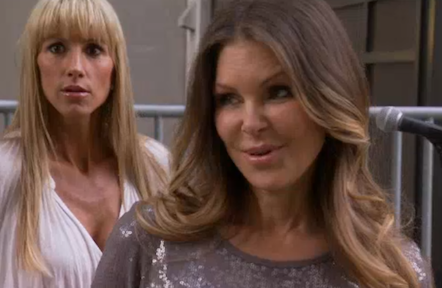 Then it’s show time for Mary and Robin, who sing live to a small group of people including Ioulia whom they’ve invited along. Mary claims the mix is all wrong but still manages to give a decent performance, with Robin more or less humming behind her.

Over at Venus Concepts esthetics boutique, Amanda, Ronnie and Jody settle in to get work done on their butt, abs and face, respectively. Tracy, the short-skirted employee who greets them, is so plastic she could be the seventh housewife were it not for the fact that she has a job.

“I think she benefits a lot from the treatments there,” says Ronnie, though it’s unclear whether she’s disapproving or simply jealous.

While the ladies are lounging around half-naked, CEO Dominic Serafino invites them to a party at his mansion.

At about that time, Ioulia calls Amanda and asks what their plans are for later in the night. Amanda hesitantly invites her to the soiree then asks with a sneer if Ioulia flew to Toronto “on coach.” OH. SNAP.

Ioulia is not impressed with the joke and vows to confront Amanda about it later on.

The ladies arrive at Dominic’s swanky digs, which feature a swimming pool and grotto to boot. One can only imagine what goes on there.

Amanda, however, leaves little to the imagination, sporting a dress that her breasts literally pop out of. Seriously. You could rest a beer between those things. Sure enough, she has a few nip slips throughout the evening, though Dominic, aka Hugh Hefner, doesn’t seem to mind.

At long last, the drama begins, with Robin instigating when she mouths off about Ioulia’s bluntness to Amanda and Jody.  Ioulia asks Amanda what she meant by the “coach” comment but Amanda shrugs it off as a joke.

Dominic invites the ladies to do a shot as well, but Ronnie, Amanda and Jody refuse. This creates tension with Amanda and Jody accusing the others of being insensitive to their alcoholic friends.

Ironically, Jody calls Mary “a bully,” to which Mary responds, “You should go take care of your very drunken daughter. She’s going to fall in the pool.”

Jody retorts, “You’re going to have an aneurysm and die, you keep up your bulls–t.”

Everyone at home: “Uh, that’s not physically possible.”

Ronnie starts crying, claiming that she has an anxiety attack whenever she’s around her friends, and is escorted out of the party by her sons.

Amanda and her boobs try to explain to Mary that she seems “inauthentic,” but Mary, like everyone else at the party, can’t concentrate on Amanda’s face, let alone the words that are coming out of her mouth.

On the way out, Ioulia, normally the drunken voice of reason, gets in Amanda’s face about her bitchiness.

“What the f–k is your problem?” she demands. “I’ve been nothing but nice to you.”

Amanda tries to explain that Ioulia’s rudeness is the issue, but Ioulia cuts her off, saying, “Don’t talk to me.”

There’s nothing left to do or say, so everyone climbs into their Escalades and calls it a night. Or, in Amanda’s words, “a train wreck.”