Real Housewives of Vancouver: Like hamsters, the ladies eat their own

Our recap of episode 9, season 2 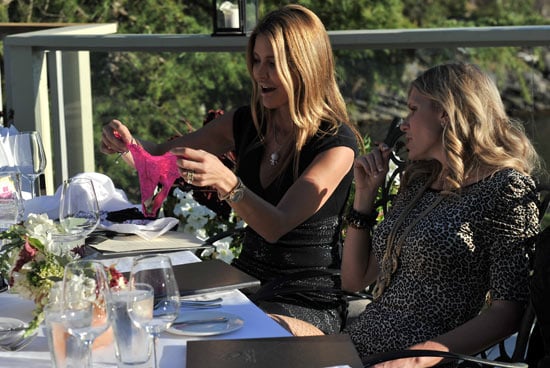 A scene from the last episode.

Last night, my roommates warned me that if the Blue Jays game didn’t end in time for Housewives, they would not be handing over control of the TV. I felt a glimmer of hope, but alas, the timing worked out fine and I settled in for my weekly dose of masochism.

It seems Ronnie’s gong show birthday was still top of mind for everyone.

Jody and Amanda meet up on the beach to discuss how Ronnie could have possibly gotten so drunk on the boat trip to Granville Island. The obvious answer seems to be: because she drank alcohol. But the ladies are determined to Sherlock Holmes it up.

“I don’t know how it got to that,” says Jody. Infuriated that Robin was drinking around her alcoholic friends, Jody concludes that she must have slipped something into Ronnie’s drink.

“I think Robin is the instigator of this event.”

Then it’s over to Ioulia, who is planning her birthday bash to be thrown at Ronnie’s West Vancouver mansion.  She pleads with Mary to make an appearance, but Mary — thank goodness, she’s finally catching on — is very reluctant. Eventually, Mary gives in though, remarking, “I think I just agreed to walk into a viper’s nest.” (An insult to vipers everywhere.)

As it turns out, Mary’s 49th birthday is coming up. Her friends Lisa and Marika offer to throw her a party at Lisa’s place.

“Ronnie is not invited,” resolves Mary. “I want real friends there, not fake ones.” We assume she’s referring to their personalities.

She tells her friends about Ioulia’s birthday and they advise her to go in with bodyguards.

As Ioulia primps for her soiree, she rocks a new pair of gold earrings from Holt Renfew, a present from her man, and a pair of wedges featuring a Russian matryoshka doll design. When her husband asks if she applied the doll faces to the shoes herself, she seems aghast.

“Do I look like arts and crafts to you?” she demands, noting the shoes are worth $1,300. “Do I look like I glue sh-t together?” That’s why she’s my favourite.

Robin picks up Ioulia in a limo and Mary calls to say that she won’t be coming after all. This annoys Ioulia, but she is quickly distracted by the party and all the presents — jewelry, champagne, caviar, a cheap book from Robin. Ronnie then reveals the ultimate surprise, a performance by Canadian classical crossover group The Tenors.

“They have sung for Celine Dion, Elton John, the Queen of England, and now they’re singing in my living room,” says Ronnie.

But I’m sure none of those people asked for an autograph on their boobs, which Ioulia hilariously requests several times throughout the evening.

Next up, it’s time for a peacemaking lunch amongst Robin, Amanda and Mary at Hapa Izakaya.

As you may recall, the last time Amanda and Mary saw each other, Amanda told Mary: “go f—k yourself.”

Comparatively, lunch has some warm and fuzzy moments, with Amanda conceding, “I don’t think it would be fair for me to say I completely dislike you, because I don’t completely know you.” Mary takes what she can get and invites Amanda to her birthday party.

Realizing that she’s nearing 50 and is flying solo, Mary employs a couple of matchmakers — Jane and Jill. She invites them, along with Robin, over to discuss potential mates.

The matchmakers ask Mary to rank looks, wealth and intelligence in terms of importance, but before she can reply, Robin interrupts with other criteria including height — “we don’t want midgets” — penis size and sexual kinks.

Finally, Mary gets a word in edgewise, saying she just wants “a partner to walk down the path with into old age.” Awww.

In an attempt to sabotage Mary’s party, Jody plans her own get-together on the same night and invites all the Housewives.

All except Robin agree to go, and they meet up at Reflections, an upscale lounge at the Hotel Georgia downtown.

Mary is disappointed that Ioulia chooses Jody’s party over her own, but not as disappointed as Ioulia is when she arrives to hear more chirping about Mary and Robin.

“We are an hour into this dinner and they are still talking about Mary. Shoot me now,” she complains to the camera.

“The only thing making this dinner bearable is the booze.” Replace the word “dinner” with “show” and she’s pretty much summed up my thoughts exactly.

Amanda, in reference to Mary, reads the description of a sociopath off her smartphone, but seems to struggle with words that are more than two syllables. And that’s before she takes a sip of booze. That’s right. The alcoholic accidentally grabs one of the other women’s drinks and tastes vodka, causing her to burst into tears.

Ioulia makes light of the situation, much to everyone else’s chagrin.

“I don’t know, I’m Russian, I cannot even taste alcohol these days,” she says.

The ladies start in on her, but at this point, she doesn’t seem to care and walks out on dinner.

Meanwhile, Mary’s party is going off without a hitch, and she finally seems to realize that she doesn’t need the approval of those trash bags to have a good time. Surrounded by her guests, Mary takes in a viewing of her new music video Hero, as the episode comes to a close.

FILED UNDER: Real Housewives of Vancouver