Will Fresh Off The Boat wind up being a noble failure?

It would be great if ABC's new sitcom succeeded, but it might be too much too soon. Can Fresh Off The Boat beat the odds? 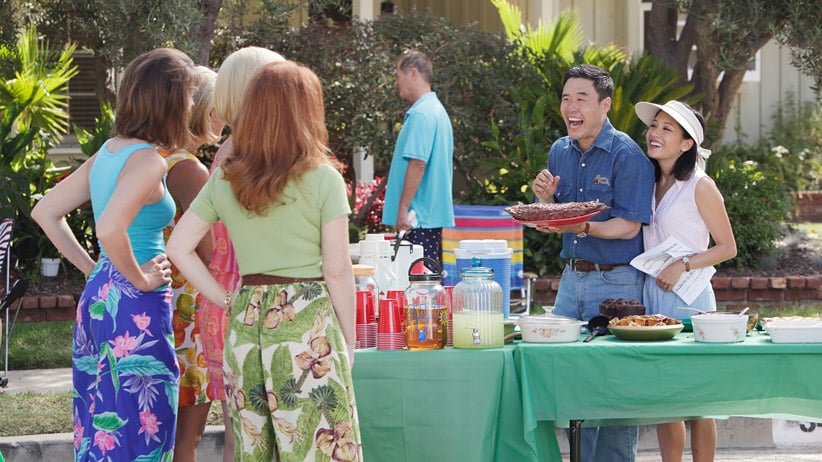 Another January, another month of snow, sleet—and a slate of new TV shows. So it was that on Jan. 15, the Television Critics Association gathered to interview the stars of the latest and greatest, with much buzz over the new ABC sitcom Fresh Off The Boat, about the coming-of-age of hipster chef Eddie Huang and his migrant family, which premiered Wednesday night. And rightly so: this was the first show to feature an all-Asian family since 1994’s All-American Girl, the ill-fated show starring Margaret Cho, and intended, as part of its manifest, to strike out against racial stereotypes.

And so, of course, the day’s first question felt like a boulder being plunked into a pond.

“I love the Asian culture,” the first reporter stated, to slackened jaws. “And I was just talking about the chopsticks, and I just love all that. Will I get to see that, or will it be more Americanized?”

Of course, this isn’t an inexplicable question, given our cultural climate. Despite the major gains for cultural sensitivity and progressive standards, there remains a kind of blind eye to the equal-opportunity portrayal of Asian characters. Historically, on screens and in our media, Asians have been quarantined to play a narrow selection of roles; it’s not too long ago that yellowface was de rigeur, even in some of our most beloved movies, like Breakfast at Tiffany’s; when the filmmaker John Hughes died, nary was the mention of his stereotypical depiction of Asians for laughs—most egregiously in 1984’s Sixteen Candles. In the documentary The Slanted Screen, legendary Japanese actor Mako recalls that a Warner Brothers executive urged the casting of the white David Carradine as the lead character in the mid-’70s TV show Kung Fu, saying that “if we put a yellow man on the tube, audiences would turn the switch off in five minutes.”

Things haven’t changed too much since. In the new Chris Rock movie Top Five, the idea of an attractive woman dating a Chinese man is interrogated, not even really for laughs but as a fact; most emblematically, 2000’s Romeo Must Die—the very name of which implies a love story between its star-crossed protagonists, Jet Li and Aaliyah—initially ended with a scene where the pair got together, as per the typical action-film trope, but that tested so poorly the studio scrapped it in favour of a hug. Arguably the highest-profile Asian on network TV screens is Matthew Moy, who plays Han Lee, the thickly accented eunuch on the popular CBS show 2 Broke Girls.

When John Cho was cast in Selfie, the modern Pygmalion retelling, he rightly called the move “revolutionary”: it was an Asian serving as a romantic lead. “Asians narratively in shows are insignificant,” he told the Toronto Star. “They’re the cop, or the waitress, or whatever it is. You see them in the background. So to be in this position … is a bit of a landmark.” He was right—but that revolution met the guillotine four months later. For all the clamour about a Korean man being a romantic lead, the pair ironically never even had had a romantic encounter before the show was axed. It should be no surprise that a Pew study from 2012 found that 53 per cent of Asian Americans saw themselves as “very different” from the typical American, and that nearly one in five have personally experienced discrimination in the past year.

Then, of course, there’s that “chopsticks” question that Fresh Off The Boat‘s cast fielded on its media day, the kind of grotesque, impossibly outdated question that would make serious headlines if, say, someone had asked the cast of Black-ish whether the show would feature rapping. So despite all the show’s good intentions, can Fresh Off The Boat shake the feeling that it’s doomed to be a noble failure, a footnote in a push that’s moving all too slowly?

Credit, first, where credit is due; Fresh Off The Boat is just the latest diverse show from ABC, a network that also claims winning shows Modern Family (a decently drawn, nuanced TV gay marriage) and Black-ish (with Anthony Anderson’s black atomic family). We’re seeing more races represented on more screens than ever, including Gina Rodriguez’s big Golden Globe win for her starring role in the critically adored telenovela-riff on the CW Network, Jane The Virgin.

It’s worth bearing in mind that Black-ish—the central conceit of which is the very digestable idea that one’s racial identity can be diluted by white culture when one becomes successful and wealthy—is a more acceptable show because of the African-American comedies that came before it, paving the way and creating a baseline each time for what a black family on TV could be: The Cosby Show, Good Times, Family Matters, Fresh Prince of Bel-Air. The same goes for Jane the Virgin—see I Love Lucy, Ugly Betty, The George Lopez Show—and while it shares many of the beats of a Spanish soap, and neatly integrates Spanish into its dialogue, it shares more DNA with twee narration-heavy shows like Pushing Daisies than it does with a true, earnest telenovela.

We simply have not seen anything like Fresh Off The Boat in more than two decades. (The last one worth mentioning was the minuscule mid-1970s five-episode run of Mr. T and Tina, which was more pioneering in spirit—see its theme song below). But Fresh Off The Boat feels very much, and very sadly, like going from zero to 100 too quickly, and that’s a difficult thing to try in the slow-changing metier of network TV, in a genre that feeds off familiarity.

Progress moves more slowly. Which is why there is valour in the much-mocked upcoming Nickelodeon show Make It Pop, a Nick Cannon-produced children’s series about a group of Korean youths who want to be a K-pop band. It’s earned flak for its origin story—what does Nick Cannon know about Korean pop? But there is value to greasing the wheels of future shows, making it easier to try new things. That’s especially true because The Drop is a kids’ show; to see oneself in pop culture has always been to visualize possibility and to see what one can be, and that’s most important to gestate in children. Jane the Virgin‘s Rodriguez said as much in her Golden Globes acceptance speech: “This award is so much more than myself; it represents a culture that wants to see themselves as heroes.” Or just ask actor Will Yun Lee, about seeing Asian hero Bruce Lee: “I just felt proud to be Asian because I saw somebody up there on the screen doing what he did.” It’s as simple as that: pop culture representation can create possibility. There simply hasn’t been enough for Asians.

There’s no question that Fresh Off The Boat needs to exist. It shouldn’t flatten itself out to appeal to mainstream audiences, a conversation that has dominated the dialogue over this show ever since Eddie Huang penned a long essay for New York Magazine about his struggle with the “Americanization” of his own life story. But that conversation, and the one about whether or not a Persian showrunner is the right fit for a pioneering Chinese show, are both missing the trees for the forest, picking apart a tiny problem compared to the big-picture issue of whether or not people are ready.

It seems clear that people are not. The idea of watching an Asian family still isn’t in the warp and weft of our popular culture yet. One day, it will be, and Fresh Off the Boat is a big step. But the pioneers rarely get the credit—or the immediate success. That’s the show’s only failure, and it’s not its own. Will it be a fatal one?

A previous version of this story suggested that John Cho was Chinese. He is Korean.

FILED UNDER: Fresh Off The Boat