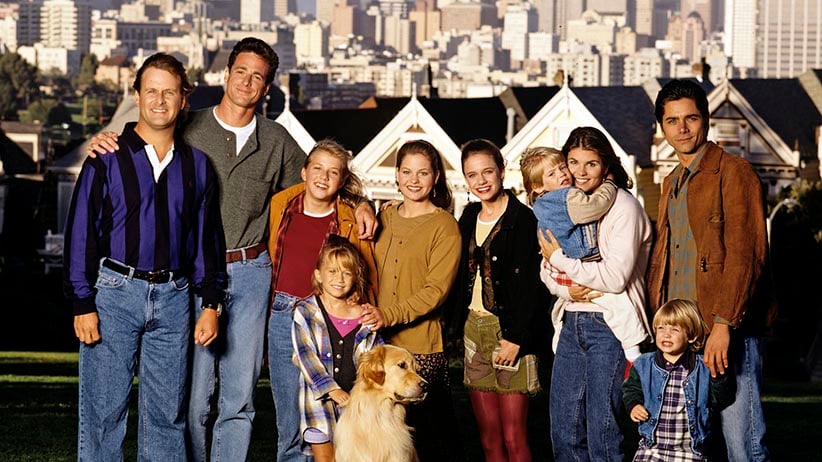 You may be disappointed that David Lynch quit the revival of Twin Peaks, but fans of TV as high art need not fear: Netflix’s revival of Full House has been confirmed for a 13-episode first season. And you know what that means. It means Thomas L. Miller and Robert L. Boyett are back together again! The men who brought us Perfect Strangers, Family Matters, Bosom Buddies, Going Places, and even a few shows whose titles aren’t plural, are reuniting for the binge-watching generation.

In true Miller-Boyett fashion, the new show is called Fuller House because eldest daughter, DJ, married a man named Fuller. And also in the tradition of the original show, the premise would sound kind of tragic if you didn’t know it was a comedy. The original series was about a man whose wife has just died, leaving him alone with three daughters; his brother-in-law and best friend move in to help him pick up the pieces of his shattered life and raise his motherless children. In the new show, DJ’s husband has just died and left her children fatherless, and her sister Stephanie and best pal Kimmy move in to help her out. The fact that her misfortune so eerily mirrors her dad’s makes it sound less like a sitcom than a family tragedy. But then, Miller-Boyett’s shows had a lot of dead parents in them (and sometimes they’d make more, like when they killed off Valerie Harper on her own show, bringing in Sandy Duncan to raise those motherless kids). It’s an easy catalyst for their mix of family comedy and music-saturated sentimentality.

But why is it Full House, of all those Friday ABC “TGIF” sitcoms, that’s become the enduring one? When I was watching TV in the ’80s, I watched Full House, but Perfect Strangers (also Miller-Boyett) was funnier and seemed like the TGIF show most likely to last. But it vanished; it wasn’t even successful in syndication. Full House is one of those shows, on the other hand, that’s been kept alive by syndication. At one point in the ’00s it was the only videotaped sitcom on a list of the top 10 most popular shows in syndicated reruns; cable networks could never get enough of it either.

It’s always on somewhere in some family-friendly time slot, keeping the Olsen twins eternally young and eternally forcing Jodie Sweetin to remember how she used to say “how rude.” All the seasons came out on DVD, and a guy devoted a popular blog to hate-watching and hate-reviewing every single episode. Really, it’s become to our era what The Brady Bunch was to a previous era: a sappy, unrealistic sitcom that absolutely cannot be killed. The decision to bring the characters back just adds to the comparison, especially since there was a sitcom about Jan and Marcia Brady sharing a house together with their husbands.

Now, I think I just accidentally dropped a hint about why Full House has endured. The Brady Brides was about women with husbands, and The Brady Bunch was about a blended family that was, in every way except hair colour, indistinguishable from a regular nuclear family (in fact, that show hardly ever referred to the fact that the kids weren’t all blood relatives, outside of the theme song). Full House was, by family sitcom standards, mildly edgy in its arrangements: three single men raising three children. The two guys who weren’t the girls’ parents got to act like they were parents, giving advice and occasional discipline (a common plot was having Jesse or Joey learn that they have to be more responsible and act like parents). All three men did tasks traditionally associated with mothers on TV, particularly the father, who became obsessed with cleaning and household chores.

The men are never punished or rebuked for not living up to the usual ideas of what a man should be, and that’s fairly rare even on modern sitcoms, which tend to have a rather specific idea of what a man needs to be like before he can be fit to raise a child. Being a goofy single idiot is something he’s supposed to grow out of, at least so he can grow into being a bumbling dad. Full House is about how you can raise a family and you still don’t have to act like what society considers a fully acceptable man — you don’t even have to move out of the house, since Jesse moves into the attic with his wife and raises his own children there. It combined the goofy-single-guy story (like Perfect Strangers) with the family sitcom, and almost unconsciously made the guys a stand-in for anyone who wants to raise a family without being totally conformist.

So Full House is a traditional, traditionalist family sitcom based on a non-traditional idea of what makes a family and what roles men can play in a family. Now, part of the benefit of this, as the Full House Reviewed guy points out, is that the series has a very strong fantasy appeal to young girls. The show is about three girls who are being raised by three nice, understanding guys who basically let them do whatever they want. (The episode where Stephanie crashes a car into the house — a plot that somehow got done on every Miller-Boyett show — ends with her being hugged and reassured that no matter what destruction she causes, she will always be loved.) Because there are no traditional parent figures on the show, there are no traditional authority figures. That makes it more of an escapist fantasy than shows where the parents are loving but stern and wise. Here, the parents are really children themselves.

One last thing I’d add that keeps Full House around: it’s as safe and clean as a Disney Channel show, but recognizably a cut above those. Even by TGIF standards, Full House was incredibly clean: Perfect Strangers might occasionally drop the word “damn” or have a sex joke, but the dirtiest thing you’d hear on Full House was a joke about the baby’s diapers. Kids’ TV shows go back and forth on content restrictions (sometimes they loosen or tighten up on whether you can say “oh, God!” and standards sometimes change abruptly when it comes to bodily-function humour), but the Disney Channel caters to parents who want to be assured of maximum self-censorship. Well, Full House has the same thing, but it also has a broadcast network level of acting — by the adult actors, anyway — and staging. Strange at it sounds, it’s probably the classier alternative among family comedies.

Will Fuller House be able to live up to this high standard of mildly edgy harmlessness? Maybe not, but Warner Brothers wants to get some extra mileage out of this valuable property (it helps that they’ll be creating an HD sequel to a series only available in standard-definition videotape, which may be starting to cut into its syndication value) and Netflix is looking for shows that kids can watch with their parents. The ultimate form of “binge-watching,” after all, is sitting your kid down in front of the TV and letting them stare at it while you try to do something else. 13 half-hours of Fuller House will buy parents a lot of quiet time.