Things will never be the same, writes Andrew Leach

A lot has changed in crude oil markets in North America in the last few years, and these changes have had significant impacts on the value of Western Canadian crude production. Reading the news today, you’d be forgiven for believing that Canada has been engaged in a foolish trade relationship for decades, selling Canadian oil to the U.S. at a discount, and buying refined products back at a premium. As it often is with energy, though, the reality is far from the spin. I wrote about changes in North American crude oil markets, and the related reasons for the push for new pipeline infrastructure almost two years ago in Maclean’s, and thought it might be a good idea to update some of the numbers here. 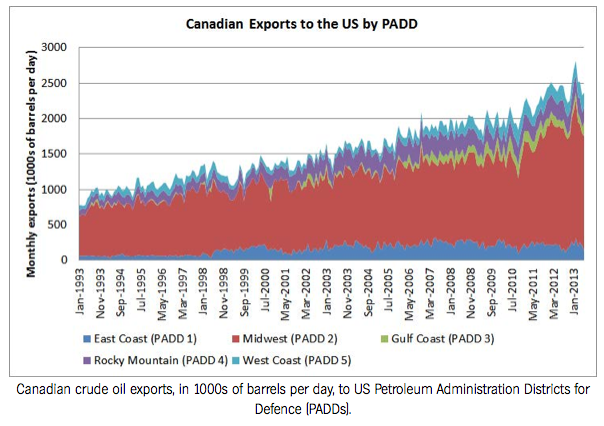 Canadian crude oil exports do flow predominantly to the U.S., but the regional distribution of those crude oil exports is vitally important to understand. For both geographic and economic reasons, most (more than 65 per cent) of our exports have moved into the U.S. Midwest via several pipeline systems including Enbridge’s Mainline and, more recently, TransCanada’s Keystone. However, since the most recent of these pipelines went into service, the market for crude has changed significantly.  As you can see from the graph below, over most of the previous 20 years, oil prices in North America (West Texas Intermediate, traded at Cushing, OKlahoma and Edmonton Par prices) have been closely tied to world prices (Brent, a North Sea oil blend). In fact, up until 2008, you could get a higher price for a barrel of oil in Edmonton than on world markets, largely because a barrel of oil in Edmonton could be cheaply shipped to the premium market in the U.S. midwest.

To make a long story short, we ship most of our oil to the U.S. Midwest because, up until 2008, that’s where people thought we’d get the best prices for our oil. I went back to look at the application materials for Enbridge’s Alberta Clipper and TransCanada’s Keystone project. In the supporting analysis for the Keystone application in 2006, the forecast was that demand in the Midwest oil “would grow and that increasing supplies of Canadian crude oil could handle this growth in addition to offsetting declining U.S. domestic production.” Enbridge provided similar analysis in support of their Alberta Clipper pipeline project in 2007, again suggesting that additional pipeline capacity to the U.S. Midwest would increase Canadian crude values by $0.28/bbl. 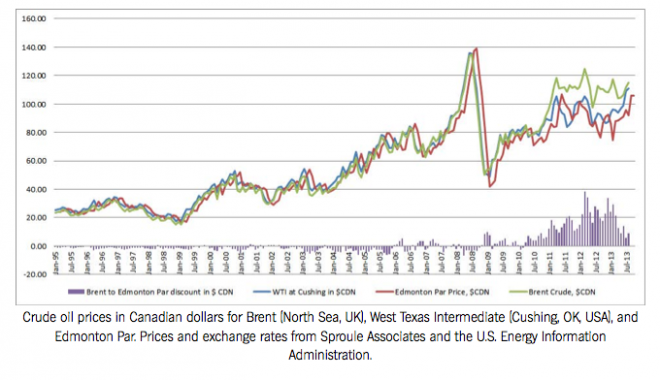 The world changed in more ways than one in 2008, and certainly did not evolve as TransCanada and Enbridge or their shippers had expected. The financial crisis slammed oil prices, but you can see from the graph that there was also a major break in the pricing relationships which had held so tightly up to then. As the first chart below shows, the hoped-for increases in U.S. Midwest refinery activity have not happened – it’s been flat at best. Further, both Enbridge and TransCanada had been expecting increases in refinery throughput in Ontario, but there has not been any meaningful increase. The more important effect comes from the second chart below, which shows increased production largely from U.S. light tight oil in North Dakota and Montana. This production, combined with steadily increasing imports from Canada led to a glut in the U.S. Midwest, and a disconnection of the U.S. mid-continent oil market from world markets. As this glut took hold, some Canadian producers even took issue with the decision to build the Clipper pipeline, despite the fact that the project had been supported by the Canadian Association of Petroleum Producers at the time of application. 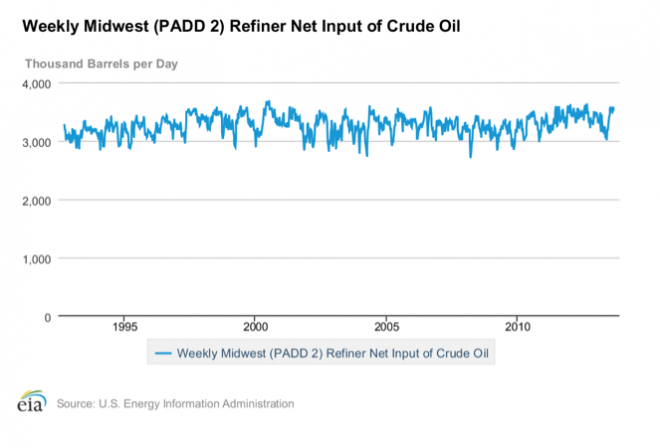 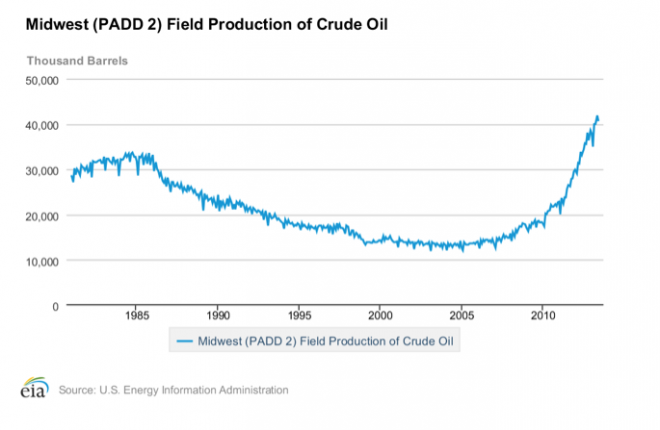 This situation has slowly begin to right itself, and the market will continue to pull towards an efficient crude transportation system. Pipeline reversal projects such as the Enbridge Seaway reversal and the TransCanada Gulf Coast Marketlink project in the U.S. have begun to drain the glut of crude from the midwest by more cost-effective transportation options, and some significant refinery outages are finally over in the U.S. midwest, adding demand. And, of course, more projects including planned pipeline reversals and new builds in Canada are looking to divert supply from the over-supplied U.S. Midwest. However, production in both the U.S. Midwest and Canadian oil sands continues to grow and significant uncertainty remains around new pipelines in Canada, so the price discount may yet return.

As the North American oil transportation system continues to evolve, with new pipelines, reversals of existing lines and a growing role for oil-by-rail, what is clear is that the North American oil market will eventually settle into a new era of pricing relationships which will be very different than those which prevailed prior to 2008. What exactly those will be remains to be seen, but it’s a topic that will be explored more in future posts.