Craft breweries bubble up all over China

Unique beers like Airpocalypse IPA are on tap in the world’s biggest, and most polluted, beer market 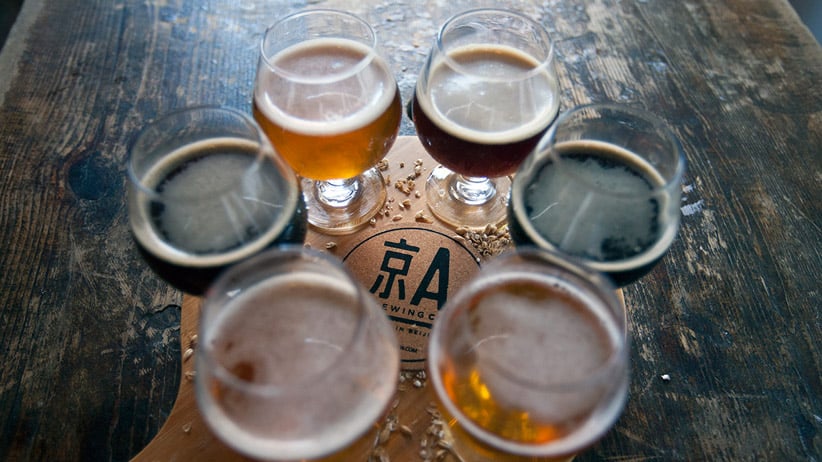 Smog may be stifling Beijing’s image, but Kristian Li wants to turn that infamous haze into a marketing hook. The Toronto-born brewer, who has sold his Jing-A craft beers (with cofounder Alex Acker) in China’s capital since 2013, is pouring out a murky concoction that cheekily reminds Beijingers of their city’s dismal pollution. Li and Acker dubbed it the Airpocalypse IPA and, upon its recent debut, they announced a temporary discount that would coincide with the city’s air quality index. If pollution reached a level of 500 or more on that scale, then the suds would be given away for free—a fitting deal, considering the brew’s equally hazy flavour, which Li and Acker attained by leaving the batch completely unfiltered.

The campaign went viral on social networks and in the international media. But the Jing-A duo say they’ve had even greater success with tapping into more positive aspects of Chinese culture. Unlike many local breweries that work to recreate the types of lagers expats are homesick for, Li and Acker brew distinctly local flavours, in the hopes of dipping into the deeper Chinese market.

“China is the biggest producer and consumer of beer in the world,” Li says, pointing out that the Middle Kingdom brewed 50 billion litres in 2012 alone, and that beer is China’s second-most consumed beverage, after tea. Mintel, a market research firm, says the nation’s beer market grew by 29 per cent since 2007, and that its overall value rose by 63 per cent in the same period, to [the equivalent of] $78 billion. Of course, those figures were dominated by huge corporate beer brands like Tsingtao and Yanjing. “If we can get just two to three per cent of that clientele drinking craft beer,” Li says, “it’s a pretty lucrative opportunity .”

Li and Acker, who previously worked in Beijing’s telecom industry (the former at Microsoft and the latter at Apple), hope to whet those appetites with flavours such as Jing-A’s Toasted Chestnut Brown Ale, for instance, brewed with the bite-sized nuts that are one of Beijing’s distinctive snacks. Their Full Moon Farmhouse Ale is infused with the sweet gui hua flower used to flavour some of the nation’s most popular teas. Li and Acker drive fresh batches around town in a keg-equipped electric “egg” scooter, a signature Beijing vehicle. “It’s all about using organic local ingredients,” says Acker, who hails from Connecticut. Li says the market is responding. “We started brewing two years ago,” he says, “and now, we’re in Beijing’s top three.”

“I love the unique flavours at these breweries,” says Lolly Fan, a local music promoter, who recently became hooked on craft brews. But she thinks the appeal may be lost on some Chinese customers. After all, this is the nation’s first generation to have easy access to bars, let alone artisanal beer. “Most Chinese people go to bars to watch shows or dance, but in a brewery, you enjoy beers and talk. A lot of customers might wonder why there’s no mojito on the menu.”

Yin Hai, a brewer and owner of Beijing’s NBeer pub, says that bewilderment is understandable, given that the Communist era left China closed off for so long and its radical reforms opened the cultural floodgates so quickly. “Fifteen years ago, when wine just got into China, everyone mixed it with Coca-Cola,” Yin says with a laugh, adding that the Chinese elite are now some of the most seasoned wine importers in the world. (The same happened with coffee.)

A lack of consumer awareness isn’t the only buzz kill for Beijing brewers. Li says general food safety and hygiene concerns, which stem from notorious lapses at Chinese restaurants and grocers, have led to strict bottling regulations. These all but prohibit small operations such as Jing-A from selling their brews on a grander scale. “If we wanted our bottles in grocery stores, we’d need to have a bottling-grade facility,” he says, adding that licences are only granted if the applicant produces a huge minimum quota.

Carl Setzer, owner of Great Leap, the city’s first and biggest craft brewery, which successfully experimented with local ingredients before Jing-A, says he’s not merely frustrated by China’s rigid health regulations—he’s terrified by them. “There’s a very draconian, but very real law here that says if you make a product that kills Chinese people, you get the death penalty,” Setzer says, adding that fear of execution is only one reason he sticks to the rules. He’s also compelled by the idea of credibility. “If we operate in grey areas because it’s China—wink wink, nudge nudge—then we’ll never persuade the higher-ups who want to see effective change in the food and beverage industry.”

Pan Dinghao, owner of Panda Brew Pub, says the fledgling industry has already worked through other challenges. “At first, we had trouble finding quality local malts and hops,” Pan says, but that problem has shrunk, as pro and amateur brewers have coordinated societies, online stores and social media networks to share tips on Beijing’s ingredient options, regulations and other fine points.

Setzer is encouraged by the scene’s overall progress, saying he sold 38,000 pints last month and those totals keep growing. Acker and Li say Jing-A’s sales have quadrupled since last year. The advantages of brewing in Beijing may well trump any setbacks. “I have a lot of friends in Boston, where every neighbourhood has its own craft brewery,” says Acker. In contrast, Li says, Beijing is like a wide-open frontier. “I have a friend back home who opened a brewery in [Toronto’s] Kensington Market,” he says, “and it cost him $1 million to start. In Beijing, you only need a fraction of that; a majority of the equipment used abroad is manufactured here.”

Acker says the low stakes and lack of cutthroat competition encourage Beijing’s craft brewers to collaborate on batches, events and promotions. In fact, the collaborative spirit may almost be a necessity in Beijing. As Acker puts it, “We’re all committed to spreading the gospel of good beer together.”

Reporter’s note: China’s strict health and safety laws (designed to safeguard the public after many recent food and beverage scandals) not only restrict the bottling of small scale craft beer, but also its general distribution. This includes the sale of draft pints at restaurants and bars off-site (doing so could lead to punitive action). So craft breweries in Beijing have had to think of creative ways to grow their businesses while still following the restrictive rules. Great Leap Brewing, for instance, has opened a brewpub restaurant, selling its beer exclusively on-site. Meanwhile, Panda Brew Pub bypasses small scale distribution restrictions by enlisting the help of a major Chinese contract bottling plant. Another Beijing establishment called Slow Boat Brewery now bottles and brews in an American facility, before importing its beer back to China.