David Suzuki versus the economists 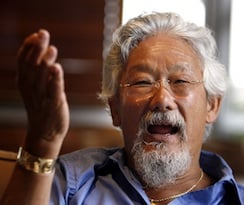 David Suzuki is Canada’s most famous environmentalist, a three-time winner of Reader’s Digest‘s poll of “Most Trusted Canadians.” His media footprint is doubtlessly bigger than all Canadian economists put together. He’s ideally placed to be a powerfully effective communicator of the interactions between the economy and the environment and help Canadians understand what the problems are, and, perhaps more importantly, what the solutions might be. But he’s not.

About a year ago, University of Victoria economics professor Chris Auld wrote a blog post about David Suzuki’s curious inability to understand what the term “externality” means as it it is used by economists. This prompted a certain amount of discussion in the (tiny) Canadian economics blogging community, largely revolving around our collective wonder that Canada’s most famous environmentalist could get the most important concept in environmental economics so badly wrong: Suzuki couldn’t have possibly gotten his version of what an externality means from an economist, or from an economics textbook. Neither does it appear to be a one-off slip of the tongue. As far as anyone can tell, Suzuki has been getting it wrong for some 20 years, which means that there are many Canadians who think they understand what economists are talking about when we use the term “externality,” but who really don’t. If one of David Suzuki’s claims to fame is as a public educator, this is one subject where he has failed badly.

As I said, this emerged a year ago. It would have been nice if David Suzuki could have made our job easier by getting the economics of the environment right the first time, but economists are used to being disappointed this way. But then Professor Auld was made aware of more recent abuse of the term by David Suzuki, which he blogged about here and here. (Yes, you should go read the posts and watch the video therein. That’s why the links are there.) The worst part isn’t the “brain damage” crack (you stay classy, David!), it’s the egregious misrepresentation of what economists do and say. Suzuki’s basic strategy is to make up a ridiculous statement and preface it with “Economists say…”—sort like how the Conservatives keep accusing the NDP of wanting to impose a carbon tax, with the important difference being that imposing a carbon tax is actually a really good idea. Not to mention the accusation that we accept cash in exchange for saying these things.

Which brings us to Mike Moffat’s column in yesterday’s Globe and Mail that summarises the material in Professor Auld’s Suzuki posts and concludes—as does Auld—that David Suzuki owes economics and economists an apology. Reaction was voluminous, swift and largely negative: apparently one of the perqs of being the Most Trusted Canadian is that you can make baseless accusations and still count on a vast supply of unconditional support. (Ottawa Citizen columnist Dan Gardner tweeted that Moffatt should not have been surprised.)

The strange thing is that there’s really no point in making an enemy of a discipline that is in many ways similar to—and largely complements—ecology. When ecologists explain that, in a complex dynamic system with myriad feedbacks, seemingly innocuous interventions can have devastating consequences, economists will nod in agreement: we see similar phenomena in the economy. Environmental economics is routinely taught in economics programs and is the subject of an active field of research.

Nor are economists as a group particularly hostile to the environmentalist movement: this open letter from the 2008 election can hardly be described as the work of anti-environmentalists. If there are disagreements, they are invariably over technical issues about the best way to solve an agreed-upon policy problem.

Many environmentalists have assured me in private—for obvious reasons, environmentalists dare not disagree with the Most Trusted Canadian in public—that Suzuki’s views about economics are not representative of their field, and that it is widely understood that closer cooperation between environmentalists and economists is a key to developing effective policy. I don’t know why David Suzuki goes out of his way to make this cooperation more complicated than it already is.