It's time to bring the ampersand back 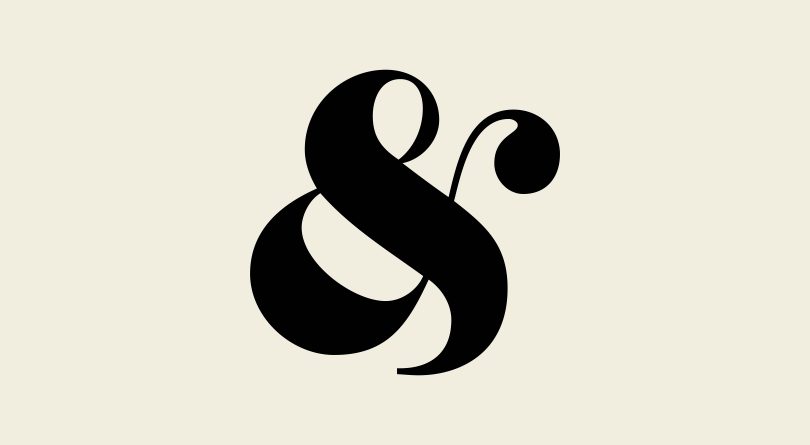 An ampersand in the Fette Fraktur font.

Earlier this year, the burger chain A&W unveiled a new logo to mark its centenary and placed itself at the centre of a simmering linguistic debate. The new logo looked a lot like the old logo, except for one omission: between the A and the W in that familiar brown italic font was—nothing. The ampersand is under threat, the company suggested in an accompanying press release. Once recited as part of the alphabet, the character with the preternatural ability to couple is now not only frowned upon by editors but also considered too perilous even for the internet, where it can’t be used in a hashtag or URL. And that matters to A&W, not least because the ampersand is the conjunctive meat in the Mama Burger of their name. Thus the tongue-in-their-onion-ring-filled-cheek campaign demanding more respect for this “useful, universal symbol of bringing things together” and the Change.org petition the chain created to support the ampersand’s return to the alphabet. “In this digital world, its exclusion has made all of our lives a little harder,” the petition stated, and more than 7,000 signatories seem to agree.

The ampersand seems a natural symbol for our emoji-astic age. Indeed, there’s a brilliant Reddit thread that bewails the fact that it isn’t one: “There’s literally an ampersand on the category icon for symbols, yet there is no usable ampersand emoji.” You click a virtual shift key that includes the ampersand symbol, but only other symbols are available. “And?” you might say to yourself.

READ: Inuktut deserves a place in the Official Languages Act

The idea of a letter—at least from a Western alphabet—having special qualities, eliciting a particular affection, belongs, perhaps, to a different time, an ancient culture: a time of sigils and runes, letter-like forms which invoke magic and demons. Or else to the marketplace of branding and trademarks. Jewish mysticism conceives of the letters of the Hebrew alphabet as having existed before the world itself, and believes that the world was created out of these elemental letters. This tradition also imagines the shape of the letter as a kind of visual allegory. The letter aleph, for example, points to heaven above and earth below.

What is our relationship to such alphabetic signs now? We live in a world of texts and tweets, emojis and keyboards. We experience and respond to our environment through text. The way we read the world these days, it might as well be made of mouse-draggable objects like clip art or symbols. Maybe, without knowing it, we have all developed a complex tactile, emotional and conceptual relationship to letters. But are we losing our intimate connection to them—to the ampersand—because of the digital? We rarely write its Möbius shape. Our view of the world changes when we are warm while no longer felling trees, splitting wood, making fires in the hearth.

I’ve always been fascinated by this sarabande of a symbol, this conjunctive flourish, this curliest of wand paths: the ampersand. It looks like a letter while not actually being a card-carrying letter; at least, not anymore. It’s a knot that lassos both + and and while actually deriving itself from the joined letters of et, the Latin word for and.

And I’m not alone. Canadian Art explains that artist Ian Baxter& was “so in love with this most curvaceous, twisty-turny piece of Anglo type” that he “legally appended it to his own last name.” And ampersandthusiasm fills social media with the kind of fetishizing connoisseurship that endangered things attract. Think of steampunk or handlebar mustaches. We’re living in the ampersandthropocene now. Throw pillows, T-shirts, jewellery, tattoos and entire Twitter feeds are curly-toed for the ampersand.

READ: Sah-ry, eh? We’re in the midst of the Canadian Vowel Shift

The ampersand used to be a kind of 27th letter, at least for educational purposes: it was included at the end of students’ recitation of the alphabet. That’s actually how the symbol & got its name. Students would say “per se” (“by itself”) before any letter that was also a word in itself (e.g., A and I) to indicate that they meant the letter and not the word, and that included the symbol for and. They would recite “and per se and” which soon became streamlined to “ampersand.” Though the symbol has been around for a long time—Keith Houston in Shady Characters: The Secret Life of Punctuation, Symbols & Other Typographical Marks notes that it was used in graffiti in Pompeii and remarks that the AD 79 eruption of Mount Vesuvius does “impose a rather hard upper limit on the possible range of dates”—Merriam-Webster dates the first use of the name to 1795.

I’m attracted to the ampersand because of its shape. It’s a miniature mother & child—the mother embracing her child, their conjunction—but also a kind of Möbius strip, a twisting ouroboros. Yet, like a Hebrew mystic, I want to read it symbolically: it is time turning back on itself, but it also links one thing and another, a joining. The cover of my new book, For It Is a Pleasure and a Surprise to Breathe: New and Selected Poems, has an image where an ampersand takes the place of the heart. The heart joins. It is an and.

About 15 years ago, another typographic element, the semicolon, was popularized by Amy Bleuel as a symbol of suicide survival because it’s “used when an author could’ve chosen to end their sentence, but chose not to. The author is you and the sentence is your life.” The ampersand is symbolic, too, but one that is less specific, more mysterious.

Paying close attention to the text we use is part of being sensitive to the highly communicative culture we live in. We need to watch for signs. We need to consider them critically but also creatively. A lettershape has a speed, a weight, a personality. It is the shape of our thinking, of metaphor, of our concepts. Text is a kind of musical score; a score for thinking. We need to see the big picture but also examine these very small pictures, because, ultimately, they reflect our selves. “&,” we need to continually ask ourselves, “&?”

Gary Barwin is the author of many books including the Leacock Prize-winning and Giller Prize-shortlisted novel Yiddish for Pirates. His New & Selected Poems will appear from Wolsak & Wynn this fall.