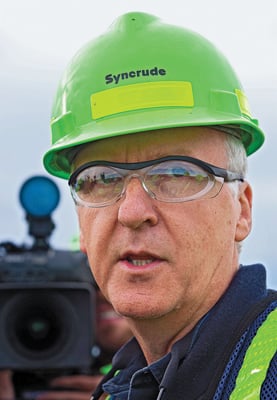 Photograph by Jeff McIntosh Ready, action!: Cameron toured a wetland that was once a Syncrude bitumen mine

Nature versus the machine: it’s the great theme of James Cameron’s visual poetry. He would have appreciated the vantage point that journalists and photographers had for his Hollywood-style arrival at Syncrude’s South Bison Hills reclamation area on Tuesday morning. As Cameron’s helicopter swooped in like a predator, showing off with lazy circles around the helipad, it set a nearby cluster of wood bison dashing off at a full-speed lope. Their brute power, as they fled nature’s self-appointed protector, was breathtaking. The contrast could not have been more Cameronian if he had been there, yelling, “Action!”

The man himself, clean-shaven and cheerful in his lime green Syncrude safety chapeau, disembarked from the chopper for a brief hike through Syncrude’s top environmental showcase. What was once a bitumen mine of the type that inspired the nickname “Canada’s Mordor” is now a mix of humdrum boreal forest, grassland and wetland. A modest little lake on the site teems with life. Once a traveller leaves the road behind, only the pen separating the Syncrude bison herd from their disease-bearing free-range fellow ungulates suggests a human presence on this land—land that, not long ago, was utterly eviscerated by petrocrats.

Cameron said little, but seemed impressed at how Syncrude had handled the problem of re-establishing biodiversity from scratch—a movie-director kind of problem, as he pointed out. After deflecting a few questions (“I’m still?.?.?.?finding out how all this works and getting my arms around it”), he was whisked off to view more oil sands vistas, ones carefully chosen to appeal to his green conscience.

Cameron’s visit to Alberta was divided into three acts. The oil companies, with Alberta Environment Minister Rob Renner tagging along, had just a few hours in the morning to dazzle him with technology and impress him with their ecological bona fides. Later he would fly to Fort Chipewyan, a small Aboriginal-dominated community downstream of the oil sands. Along with George Poitras, the Cree environmental activist who personally invited him to visit the region in April, Cameron was set to meet with Ft. Chip residents concerned about their vulnerable position opposite the delta of the Athabasca River. Finally, the director made his way to Edmonton for a palaver with Premier Ed Stelmach and other officials.

In April, Cameron had called the oil sands a “black eye” on Canada’s environmental record. He claims to be keeping an open mind now. And the oil sands business is treating his visit, apparently quite sincerely, as an opportunity rather than a hassle. (The general consensus here appears to be that in the face of environmental opposition, the best option is to invite complainants up and show them around.) Not that they have much choice. In truth, this ought to be a period of relatively positive publicity for Mordor. On Sept. 23, Suncor Energy, which has been operating in the region since 1967, unveiled its own 225-hectare patch of reclaimed land that had once been the company’s original tailings pond. It’s another modest down payment on the industry’s promise to leave behind no ultimate trace of its vast mines and its tailings—the pools of de-oiled sand and clay left behind after most of the valuable hydrocarbons have been extracted.

Suncor also introduced a timetable for its tailings reduction operation—a scheme for using an inert polymer flocculant (a substance that helps fine sediments precipitate) to cut the settling time of tailings from decades to weeks. Shell Canada announced a pilot project to test a similar technique in August. Syncrude, the big dog of the sector, is trying its own ideas, involving centrifuges and gypsum. This outburst of innovation follows directive 074, a February 2009 order from the Energy Resources Conservation Board that requires them to reduce fluid tailings by 50 per cent before July 1, 2013.

The new projects fuelling growth in oil sands production, however, mostly involve “in situ” extraction, whereby the oil is separated from the bitumen underground. In situ plants have a small footprint and require no tailings. It’s a continual source of frustration for the Alberta government that international criticism of the sands has focused so much on the environmental effects of tailings—an obsolescing technology being downscaled through regulation where it already exists.

Slightly harder to dismiss are the claims that massive tailings are worse than anybody thought to begin with. On Aug. 30, University of Alberta water scientist David Schindler announced the publication of a new paper in the Proceedings of the National Academy of Sciences that contained compelling evidence of elevated levels of EPA-designated “priority pollutant” metals in river water and snow near oil sands development sites.

In one regard, Schindler’s paper is actually good news for the tar patch; his team found that the water and snow of the Athabasca watershed was within guidelines for drinking with respect to all the primary pollutants (which include mercury, arsenic, thallium and cadmium, as well as more prosaic metals like nickel and zinc).

Executives and ministers who are constantly being challenged to “drink the water” of the Athabasca get the green light from this study. The concern is with developmental problems in aquatic life, and with the possibility of bioaccumulation in the fish and wild game that end up in the diets of Aboriginals living downstream. Although there is natural leakage of bitumen into the Athabasca and its tributaries, Schindler seems to have identified evidence of a specific industrial footprint. His independent study raised immediate questions about Alberta’s monitoring of metallic pollutants, funded by the oil industry through the Regional Aquatics Monitoring Program (RAMP). Schindler’s international prestige is so great that any direct fight with him over water issues would be unlikely to go well for RAMP, and last week Renner announced that an independent review panel of scientists would be chosen, with input from Schindler, and would investigate the differences in the results.

That leaves the government and the industry somewhat on the defensive as Cameron swoops in on his fact-finding mission. Aboriginals like Poitras will be giving Cameron anecdotal testimony to changes in water and wildlife downstream of bitumen mining. But they also—as the director will find if his visit is not too stage-managed—have skin in the oil sands game. Estimates of the native and Metis quotient in the overall oil sands workforce run at 10 per cent or more, and both Cree and Chipewyan bands own stakes in oil sands-related enterprises. A Chipewyan-owned factory in Ft. Chip, for example, knits Kevlar safety wrist guards. A hotel in Fort McMurray is owned by the commercial agency of the Mikisew Cree.

The patch also provides money to bands for social development and education, and occasionally pays them outright to back down from asserting their legal rights. On Sept. 22, the Mikisew band, of which Poitras is a former chief, announced that it was waiving a constitutional challenge to Total S.A.’s Joslyn North mine in exchange for an amount of money and a set of “social contract” guarantees. The details of the deal went undisclosed.

Even as Ft. Chip was preparing to receive Cameron, the Mikisew band was making quiet efforts to establish that Poitras no longer speaks for them officially. The current chief, Roxanne Marcel, wrote an op-ed for the Slave River Journal this month emphasizing her respect for Poitras but adding that “we see advancements in oil sands production activity that more align with our feelings regarding environmental stewardship, including Suncor’s advancements in dry tailings pond technology; we support this.”

Now Canada waits to see whether Cameron will carry a nuanced message like that to the wider world, or whether he will continue with angry talk of black eyes.