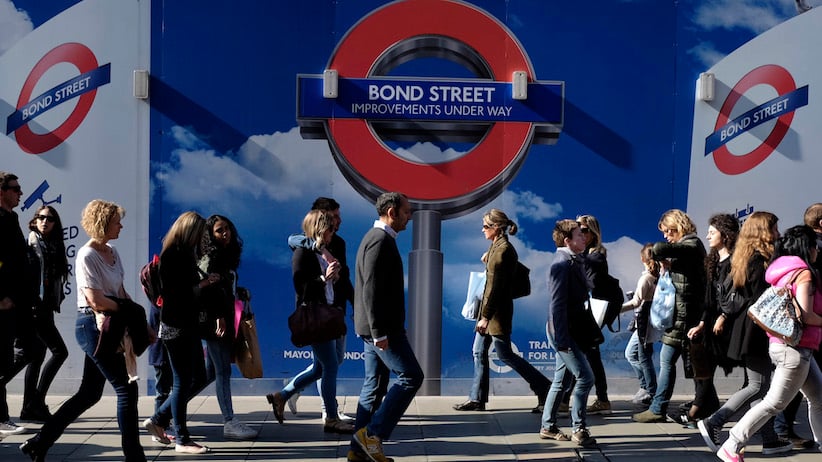 People walk past signs for a London Underground improvement programme during a busy afternoon on Oxford Street in London May 3, 2014. A second tube strike is planned to go ahead on May 5. REUTERS/Kevin Coombs

Bombardier’s bad breakup with London’s transit authority in 2013 reared its head again this week. A budget committee report accused the Montreal plane-and-train maker of misrepresenting its ability to upgrade the Tube’s signalling system. In the end, Transport for London, which was also chastised for its handling of the contract, paid Bombardier $160 million to get out of the deal before hiring a competitor to complete the work. The British transportation agency cited Bombardier’s “shameful performance” while London Mayor Boris Johnson went further, saying Bombardier “totally stuffed it up.”

The public tongue-lashing comes at a bad time for Bombardier. It’s been hammered by delays and cost overruns relating to its slow-selling C-Series aircraft, forcing it to seek billion-dollar bailouts from the Quebec and Canadian governments. But as the London mess demonstrates, Bombardier’s rail business hasn’t always been a smooth ride either—though it should be noted big transportation projects are often prone to delays and setbacks, not all of which are Bombardier’s fault.

Here are five other examples where Bombardier’s rail business ran into trouble.

1. The Toronto Transit Commission: The good news is Toronto’s next-generation streetcars are supposed to begin arriving at a rate of four a month beginning in April. The bad news: there were supposed to be 73 of them trundling along the streets by the end of last year, but a series of production delays meant only 16 were actually delivered. The TTC at one point considered suing Bombardier for repeated delays of its $1.25-billion order. All 204 of the low-floor streetcars are expected to be in service by 2019.

3. Metropolitan Transit Authority: Delays in the delivery of new Bombardier-built replacement cars means some New York City subway users will ride the same vehicles as Mad Men’s Don Draper did in 1964, according to a local transit group. The only difference? “They don’t look as good as he does.” Bombardier won the contract to build 300 cars for $600 million back in 2012. The old, 1960s-era cars were originally supposed to be phased out by 2017, but will now stick around as late as 2022.

4. City of Phoenix: Bombardier was hired in 2009 to design and build a sky train that would connect travellers at Phoenix’s Sky Harbour International Airport. But Bombardier ended up suing a subcontractor for allegedly performing shoddy track work.

5. Amtrak: America’s first high-speed trains were delivered in 2000 by Bombardier and France’s Alstom. But they came more than a year late and initially ran at slower-than-advertised speeds between Washington and Boston. Amtrak claimed the railcars didn’t meet design specifications, while Bombardier said the data provided to it about tunnels and track geometry was inaccurate. The two sides ended up suing each other and eventually settled. Bombardier said in 2014 that it wouldn’t bid on replacements for the trains.