The long road to clean power for First Nations communities

Indigenous communities in oil sands country are taking the first steps to wean themselves off fossil-fuelled electricity. But even those who've made inroads are shying away from diesel-free ambition. 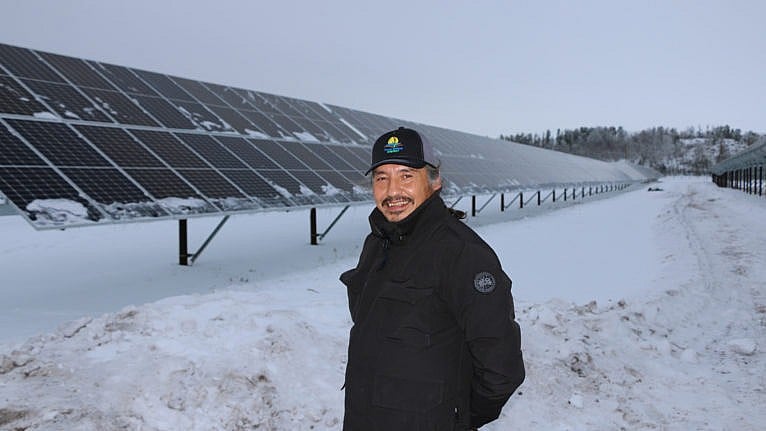 The tanker trucks normally come by the dozen over the winter road from Fort McMurray, Alta., during the few weeks the ice can hold their weight. They make the 4½-hour northbound trek laden with the same fossil fuel they burn—stuff that Fort Chipewyan, Alta., has long used to generate its electricity. But this summer, the 800-resident hamlet downstream from Alberta’s oil sands expects to shutter its diesel plant for the first time, and instead power its lights and TVs through the warm season with solar energy.

The project was several years in the making, a partnership between local Dene, Cree and Métis leaders using $7.8 million in federal and provincial grants. The largest solar field of its kind in Canada was a huge undertaking: 5,760 photovoltaic panels transported across that same ice road, over myriad lakes, bogs and rivers. It will yield Fort Chip huge greenhouse gas and fuel savings, eliminating the need for 25 annual diesel tanker trips. But the community will still need to burn 75 truckloads of petroleum each year.

There are about 170 remote (and mostly Indigenous) northern communities across Canada’s provinces and territories, the vast majority off the main power grids and reliant on diesel—a dirty, spill-prone and archaic source by 21st-century standards. Collectively, they burn through several truckloads every day. Many are going the route of Fort Chip and pursuing renewable energy alternatives, with more than a half-billion federal dollars committed to the endeavour since the Trudeau Liberals took office. They pledged last campaign to get all Indigenous communities off diesel by 2030. But as the massive effort to cut Fort Chip’s diesel use by one-quarter shows, there’s a dauntingly long distance from here to there—and even communities that have made inroads are shying away from the diesel-free ambition. “In a perfect world, it’s definitely something to aspire to,” says Jason Schulz, who led the solar project for the Athabasca Chipewyan First Nation. “But realistically, I don’t know if it will ever come to fruition.”

Few doubt the merits of moving northern hamlets and villages off diesel, and cutting carbon emissions is just the start. It’s a costly fuel to burn in large quantities. The generators—essentially, large internal combustion engines—use old technology and are costly to maintain. At the same time, the move to local sources of wind, hydro or solar power increases the autonomy of Indigenous communities while renewing traditional connections to their natural surroundings. “We work with the sun, we work with the wind, we work with Mother Nature and we work with the water,” Athabasca Chipewyan Chief Allan Adam said at a ceremony to mark the solar development’s completion. “For the children of the future, to give them a better life, a cleaner life.”

Northern leaders are also eager to contribute to the fight against climate change because their communities are particularly vulnerable to its ravages. The ice roads are a case in point, as over time their operable seasons have shortened from a few months to a few weeks. This winter, the Fort Chipewyan Winter Road opened later than scheduled, on Dec. 31, before warm weather forced it closed on Jan. 13, before the annual diesel shipment arrived. The municipality hired a specialized contractor to shore up the river crossings in hopes of offering a few extra trucking weeks in February, saving the huge cost of importing fuel by barge or plane.

The same problems afflict Deline, N.W.T. The ice road across Great Bear Lake may offer 30 days of commercial transport in a decent year, but there were only 25 last season. “We want to be a part of having a healthy environment, of making sure these issues are addressed even in a small community like Deline,” says Leeroy Andre, the Ɂek’wahtı̨dǝ́ (or high leader) of the Deline Got’ine Government. The community, 538 km northwest of Yellowknife, installed solar panels on the government-owned hotel’s roof, and recently got a $500,000 federal grant  to develop a bigger system. Deline also intends to deploy a system that burns wood pellets—still a carbon power source, but one that makes use of waste material from Alberta sawmills.

The number of renewable energy projects across the remote North doubled between 2015 and 2020, notes a report from the Pembina Institute think tank, which has collaborated with Ottawa on off-diesel initiatives. On an annual basis, that’s reduced diesel consumption by about 12 million litres—not counting the 800,000 Fort Chip can now shed—with about 225 million to go. That’s just for electricity; the communities burn about twice as much for heating.

In 2017, Ottawa committed $220 million over six years for clean energy for rural and remote communities, and in December pledged another $300 million, while some provinces and territories have kicked in with their own programs. “But to get to 100 per cent is difficult,” says Dave Lovekin, director of Pembina’s renewables in remote communities program. While wind and solar expansions can fairly easily displace about 30 to 50 per cent of diesel, he says, further improvement to battery storage and base-load power requirements will necessitate more dramatic upgrades. Northern winters, after all, offer little sunshine—in some places none at all.

The increased spending will help Ottawa pursue its “extremely challenging” goal, Lovekin says. But the wording of the feds’ latest commitment leaves more wiggle room than the Liberals’ 2019 platform. It states only that diesel-reliant communities will “have the opportunity to be powered by clean, reliable energy by 2030”—language intended, perhaps, to make it sound like less of a top-down federal “deliverable” than, say, the unfulfilled promise to get all First Nations off boil-water advisories within five years.

This article appears in print in the March 2021 issue of Maclean’s magazine with the headline, “The long road to clean power.” Subscribe to the monthly print magazine here.