Tim Hortons: Roll up your personal information to win

As Tim Hortons launches its first entirely virtual Roll Up The Rim contest, a lot of Canadians aren't thrilled with the idea of handing over yet more private information for a chance to win 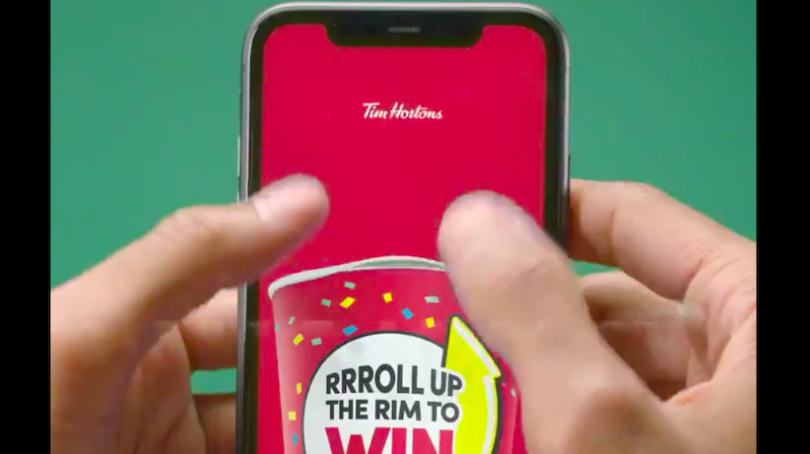 Three decades after launching the Roll Up The Rim contest, Tim Hortons debuted its first cupless version of the contest on Wednesday, replacing the traditional roll-up experience with a virtual one in the company’s app instead.

Citing coronavirus the company said over the weekend that it would do away entirely with the traditional paper cup because it “does not believe it’s the right time for team members in our restaurants to collect rolled up tabs that have been in people’s mouths during this current public health environment.” Roll-up-the-Rim cups were only going to be available for the first two weeks of this year’s contest anyway, with the rest of the contest carried out entirely through its app. The contest runs from now until April 7.

The decision to go all-in with the Tim Hortons app also fits with the company’s efforts to fix its loyalty program. When Restaurant Brands International, the company that controls Tim Hortons, revealed the latest in a string of disappointing results in February—sales at existing stores in Canada fell 4.6 per cent in the fourth quarter from the year before—the company blamed part of its troubles on a loyalty program that saw too many free coffees handed out with not enough money coming in for other items.

Tim Hortons revamped its loyalty program, which previously gave away a free hot beverage after seven purchases, and replaced it with a point system that allows customers to bank points and use them to buy other items. But it also wants more customers to use its app instead of unregistered Tims Rewards loyalty cards, since it believes the app will give the company more ways to encourage sales and push promotions, so it sweetens the rewards for those with registered cards or the app.

But the social media response to the company’s announcement launching the digital version of the Roll Up contest shows how wary many Canadians are about handing over yet more personal information to a corporation, and it’s not yet clear Tim Hortons has found a winning formula for its loyalty woes.

app asks for way too many permissions, no thanks

Its not roll up the rim, its “install this app and give us full access to your data” for a chance at free coffee. McDonald’s just extended $1 coffee to April 5, screw your app, hello McDonald’s

The app is way too invasive…this was a BIG mistake

Translated: Give us all your personal info free.

Responding to the concerns raised on Twitter, a spokesperson for Tim Hortons said in a statement that “to unlock access to millions of dollars in prizes, guests simply need to provide us with their email address—the process that is used to register for Tims Rewards, allowing us to reward millions of guests every day.”

“Unless guests opt in, they will not receive emails from Tim Hortons and only major Roll Up The Rim prize winners will be contacted through their registered email,” the spokesperson said, adding that in addition the chain will be giving away $14-million worth of coffee and hot beverages to in-restaurant guests who purchase a hot beverage during the first two weeks of the contest, regardless of whether they have the app.

Users who do install the app and register are asked to give it permission to track their location, though they can opt not to. Customers must also agree to Tim Hortons privacy policy. Since few people ever read those, here are some highlights:

READ MORE: Recreating the Tim Hortons menu, for the better

These are similar to the privacy terms set by other brands and chains that use app-based loyalty programs, and it could be that Tim Hortons is able to parlay the private information it manages to collect into more revenue. However the chain continues to face many of the same challenges that have stung it in recent years. With a customer base that skews older, Tim Hortons must find a way to move its loyalty program and promotions, like Roll Up The Rim, deeper into the digital world without alienating its silver-haired core.

McDonald’s, which has emerged as the company’s biggest challenger on the coffee front, continues to offer a simpler loyalty program whereby customers collect seven stickers from cups to redeem a free brew. McDonald’s also announced this week it’s extending its ongoing $1 coffee promotion for another week, a direct shot at the Roll Up The Rim contest.

McDonald’s enjoys a significant edge in its battle with Tim Hortons since it can use coffee as a loss leader to get people into its restaurants to buy other things. Tim Hortons, on the other hand, is far more dependent on the revenue it generates from coffee sales. The company’s plan to reinvigorate the brand by getting back to the “basics” of coffee, baked goods and breakfasts, only reinforces that reality.

FILED UNDER: Editor's Picks roll up the rim Tim Hortons