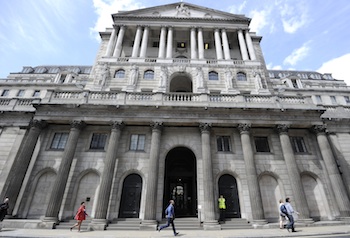 I wrote about the private-sector side of the LIBOR scandal in my previous article for Maclean’s. Now let’s turn to the more intriguing part of the whole affair: How the Bank of England itself at one point supposedly started to encourage Barclays to fiddle with the numbers.

Even if the allegations proved to be true, you’d be excused for scratching your head in puzzlement. What’s the big deal with a central bank engaging in manipulation for the sake, supposedly, of the health of the financial system?

With governments trying to contain the effect of the financial crisis first and now the eurozone mess, we hear of central banks tampering with the markets almost every day. And, really, governments have always intervened in the economy to influence–manipulate if you will–outcomes. When a central bank adjusts short term interest rates, it is using its longstanding, legitimate power to artificially tip the market one way or the other. And, in a closer-to-home example, rent control is another form of market manipulation at the hands of the government.

We generally accept various forms of manipulations because we think the government can and ought try to influence certain markets in ways that produce beneficial outcomes for society. Take the case of monetary policy: The widespread consensus is that central banks can cushion recessions by lowering interest rates and help calm roaring inflation by raising them.

And because monetary policy is largely viewed as a reasonable area of government intrusion, interest rate changes are announced publicly. Market watchers and the general public may disagree about the need for rate cuts or hikes at any moment, but, for the most part, the government’s right to make the decision goes unquestioned.

Now, that’s not what happened with LIBOR. In this case, if the Bank of England did indeed instruct Barclays to submit artificially low rates, it had no choice but to convey such directions surreptitiously. According to the allegations, the very goal of Barclays providing false submissions during the financial crisis was to deceive the market into believing the bank was healthier than it truly was. Had the Bank of England publicly told Barclays to submit lower LIBOR figures, the charade would have been self-defeating. Everyone would know that LIBOR didn’t represent the true rate of borrowing.

Unsurprisingly, LIBORgate has revived a number of longstanding suspicions and rumours about governments–and particularly the U.S. one–secretly manipulating markets normally thought to be free. But it also reignited a serious discussion about whether governments pressed by the need to avoid a financial catastrophe will–and whether they should–extend the scope of their manipulation.

For one, Nouriel Roubini the NYU economist who predicted the financial crisis and is now warning of a “perfect storm” for the global economy in 2013, recently said he believes the Federal Reserve might, at some point, feel forced to buy equities, if all else fails.

Roubini isn’t advocating that the Fed do so, but other very influential people have. In 1989, a former Federal Reserve governor named Robert Heller argued publicly that the central bank should intervene in the stock market to prevent stock market crashes. Fast forward to today and prominent UCLA economist Roger Farmer is essentially advocating the same thing. Farmer believes that the stock market crash contributed significantly to the Great Recession and that the government should act to put a floor on tumbling stock prices when they threaten the wider economy.

Ruminations on unconventional interventions extend to the gold market, too. According to a 1993 Federal Reserve transcript, then-Fed chairman Alan Greenspan suggested to colleagues that the government sell gold to push down its price. In doing so, the Fed might have been able to lower the public’s expectations of future inflation because gold is widely seen as a hedge against generalized price increases.

And the temptation for governments to fiddle with things they don’t usually touch is rising. It’s very easy to understand why the BOE might have considered allowing or persuading banks to misreport LIBOR. In 2008 the world was in the middle of a financial storm the likes of which had not been seen since the 1930s. Desperate times call for desperate measures, some might argue.

Of course, it’s fanciful to believe such interventions would be harmless. There’s a reason LIBOR, gold, and stocks, to name three, are thought of as free markets. Through the mechanism of price, they convey important information, be it the perceived value of companies in stocks, investors’ faith in government-issued money and in gold or the actual rate at which banks can borrow from each other in LIBOR. Efforts to manipulate such markets robs the public of the signalling qualities they provide, in much the same way that falsifying a company’s books cloaks the true state of its finances from investors. This is especially true when interventions are conducted without informing the public.

There’s also the danger desperate measures will be used even when times aren’t so desperate. It isn’t hard to see how the government could start playing political games with the stock market, for example.

All this said, though, if Roubini is right, we’re soon to get more, not less, of the government’s hand in the markets. This issue won’t be going away anytime soon.