Deficits are here to stay. But how sustainable is that?

The days of endless deficits are back, and with minority government pressures and economic trouble ahead, that’s a problem 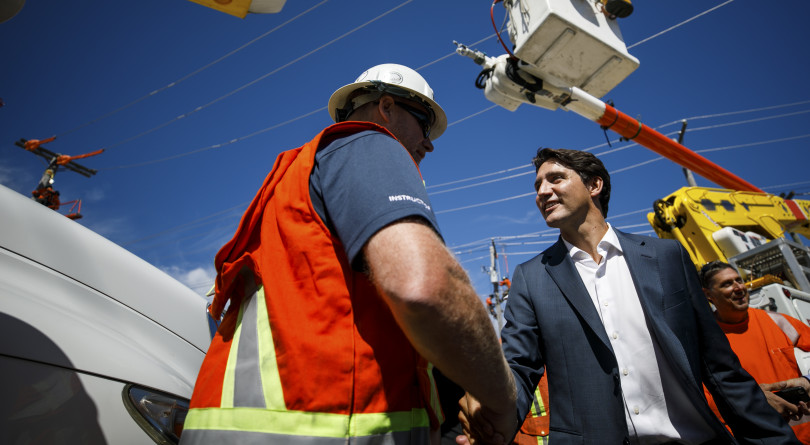 Only a few years ago, the notion of running government deficits year after year with no plausible plan for balancing the books was widely seen as political poison in Canada. But the conventional wisdom among political strategists that Canadian voters demand fiscal discipline has crumbled over the past two federal elections, replaced by a shrugging acceptance of red ink. In 2020, though, with growing fears of an economic slowdown or even a recession, the question of what level of deficit really is sustainable could be put to the test.

Canadians old enough to have voted in the 1990s remember how wiping out deficits turned out to be a surprisingly popular signature accomplishment of Liberal prime minister Jean Chrétien and his finance minister, Paul Martin. By 2009, when Conservative prime minister Stephen Harper plunged Canada back into deficit, he sold the spending spree as a short-term response to that year’s global recession. Then Justin Trudeau, on his way to beating Harper in the 2015 election, pitched what sounded like a cautious Liberal plan to again run deficits—only small ones, mind you, and for just three years—before returning safely to surplus.

None of that recent history counted for much in the fall 2019 election. In his first four years in power, Trudeau had far overshot his promised deficits, without facing serious public backlash. His Liberals switched from saying they’d soon balance the books to merely pledging to keep the debt-to-GDP ratio—the size of the accumulated federal debt as a share of the whole economy—shrinking steadily. For his part, Andrew Scheer talked up vague plans to cut spending on the way to again erasing the deficit, but his Conservatives waged their campaign—like partisans of all stripes—mostly on promises to reduce taxes and expand programs.

READ: Remember when campaigning politicians at least pretended to care about deficits

Has Canada stumbled back into the bad old habits of the 1970s and 1980s, when annual deficits came to feel normal, even inevitable, until a looming financial crisis forced Chrétien and Martin to act starting in 1995? Most private-sector analysts who keep an eye on the federal balance sheet actually don’t seem to be especially worried. To them, everything’s relative. For instance, Stephen Brown, chief economist for Canada at the international research firm Capital Economics, stressed in a recent report that Canada’s federal debt-to-GDP ratio of 31 per cent is “very favourable” when contrasted with the U.S.’s 77 per cent ratio.

Even veterans of the Chrétien-era deficit wars are not sounding the alarm. Scott Clark was a senior finance department official through the 1990s, rising to become Martin’s deputy minister in 1998, the year the deficit was eliminated. He says federal debt isn’t high enough these days to again rate as a dominant issue. After all, in last spring’s federal budget, the Liberals were able to boast credibly of Canada’s “low-debt advantage,” pointing to bigger debts in all the other rich countries of the G7. “By any standard, historically or internationally, things look pretty good,” Clark says.

And he argues that balancing the books—always the goal of deficit hawks—isn’t really essential. In fact, few advanced democracies with free-market economies are anywhere near accomplishing it. On the other hand, he says, some benchmark for restraint—what’s often called a fiscal “anchor”—is needed to keep the temptation to spend more and tax less from slowly spinning out of control. For the Liberals, the anchor is supposed to be keeping that debt-to-GDP ratio trending down.

READ: What the deficit-loving Trudeau Liberals could learn from General Motors

But Clark says staying on track to gradually ease the debt load looks unlikely if the Liberals fully follow through on their election platform. An analysis he conducted with another former senior Finance official, Peter DeVries, concluded that the Liberals didn’t account for “significant risks to the economic outlook,” made highly optimistic assumptions about savings from a planned review of spending, and failed to fully account for some costly promises, like boosting maternity and parental benefits and beginning to bring in pharmacare. “When do you know that a government is losing control of its sound fiscal management? I would say we’re on the cusp of that right now,” he warns.

Kevin Page, president of the Institute of Fiscal Studies and Democracy at the University of Ottawa, is another former federal official who expects the Liberal minority government to come untethered from its anchor. “The fiscal target the government has, declining debt-to-GDP ratio, we’re going to blow through quickly,” he says. Still, like Clark, Page doesn’t see any immediate cause for panic, especially while interest rates remain forgiving. “Our debt-to-GDP numbers are low and, maybe more important, the carrying cost for that debt is very low,” he says.

Neither Clark nor Page offers a simple take on deficits. Both see the federal balance sheet as fundamentally strong. Neither detects any imminent risk of early ’90s-like proportions. Yet both urge the federal government to find some clearer formula to instill long-term self-discipline. Asked what he’s worried about when it comes to deficits, Clark says: “It’s a creeping illness.” Page makes much the same point and cites the late American economist Hyman Minsky, who argued that a dangerous complacency sets in during long stretches of economic stability, prompting decision-makers to take the risks that only become obvious when the next crisis hits.

In other words, Clark and Page see deficit spending as a long-term concern. But the short-term prognosis isn’t making 2020 look like any picnic. Bank of Canada Governor Stephen Poloz, in a sobering report delivered the week after the Oct. 21 federal election, said “the worsening global situation is the primary issue,” and warned that “the resilience of the Canadian economy will be increasingly tested as trade conflicts and uncertainty persist.” The central bank projects that the Canadian economy will grow a very modest 1.5 per cent this year, edging up to 1.7 per cent in 2020 and 1.8 per cent in 2021.

READ: Stephen Poloz on taming the housing market and the dangers of a trade war

If economic growth slipped a notch, or even stalled in a recession, that closely watched debt-to-GDP ratio would rise fast. According to the last federal budget, a one percentage point decline in GDP growth would cut tax revenues while boosting spending, particularly on employment insurance benefits, by a combined total of about $5 billion—a big hit, considering the Liberals already project a deficit of $27.4 billion in 2020-21. And that’s not taking into account any special spending measures the government might embark on to blunt the impact of hard times.

Discretionary spending of that sort would probably happen. The alternative would be injecting some oomph into the economy by cutting interest rates, but they are already so low that the Bank of Canada would have little room to manoeuvre in a downturn. Page says one advantage of the Canadian government’s low debt load, compared to other developed economies, is that it can comfortably ramp up spending should a recession hit. “I would say we still have the horsepower,” he says.

Even if the economy keeps growing and doesn’t require intervention in 2020, the pressure will be on Trudeau to let the deficit rise. Not only did his Liberals run on their own ambitious spending promises, they will likely be relying on the NDP to keep their minority afloat. NDP Leader Jagmeet Singh says his first priority when Parliament resumes sitting is to push for universal pharmacare—a landmark expansion of public health care that the Parliamentary Budget Officer estimates would cost more than $10 billion a year.

Page said the Liberals will likely have to slow that down by phasing in prescription drug coverage. “One option would be to say, ‘We’ve got to keep the NDP happy, but we’re not going to spend $10 billion a year to do that,’ ” he says. “You could have a range of options for moving forward over five or 10 years.”

The prospect of a minority-government stretch that features Trudeau leaning on Singh to win House votes has some observers looking back to the expansions of federal programs and spending during the NDP-backed Liberal minorities of the early 1960s and 1970s. Page, in a recent commentary co-authored with University of Ottawa economics student Mélyne Nzabonimpa, predicts the Liberals will try to implement their entire 2019 platform in the government’s spring 2020 budget.

So, to keep a lid on spending, they urge Trudeau to negotiate a “fiscal charter” with the opposition parties, setting out “constraint targets and rules.” “The current Liberal fiscal rule of a declining debt-to-GDP ratio,” Page and Nzabonimpa write, “while supported by the NDP and Green party in the 2019 electoral campaign, is likely too weak of a rule to guide budgets in a minority setting where political pressures to use deficit financing will be greater.”

The charter is a novel idea. Past governments, however, have shown no sign of being open to a rule book that might limit their political flexibility. Even the legendarily deficit-slaying Chrétien government of the mid-1990s stumbled into surpluses, Clark recalls, rather than deliberately charting an uncompromising path to balancing the books. Martin initially set out only to cut spending enough to shrink deficits as a share of GDP—a benchmark similar to the one Trudeau’s Liberals now tout as their standard for fiscal probity.

What Martin didn’t expect back then, Clark says, was that the unexpectedly powerful economy of the 1990s would spin off far higher tax revenues than federal fiscal planners anticipated. “It’s just that things turned out a lot better than we thought, and we said, ‘What the hell—let’s take credit for it,’ ” Clark says. “Martin hated everything he was doing until he realized it was making him famous,” he adds jokingly. Since truly wrestling with the deficit doesn’t look like anyone’s path to political fame in 2020, the question is whether the new minority government will bother even keeping it in check.

This article appears in print in the January 2020 issue of Maclean’s magazine with the headline, “Hey big spenders.” Order a copy of the Year Ahead special issue here. Subscribe to the monthly print magazine here.