About those surpluses everyone wants to spend

Without further austerity, they disappear quickly

The 2014 budget projects surpluses for the years 2015-16 and beyond, and these surpluses are establishing themselves as the context for the next election. All parties are toying with ideas for disposing of those surpluses: some combination of tax cuts or increased spending. But before accepting these projections as the baseline for developing their election platforms for 2015, the opposition parties should take into account the assumptions made in the 2014 budget.

In particular, they should look at the projections for government spending. Program expenditures (expressed as a share of GDP) are set to decline over the budget’s projection horizon: 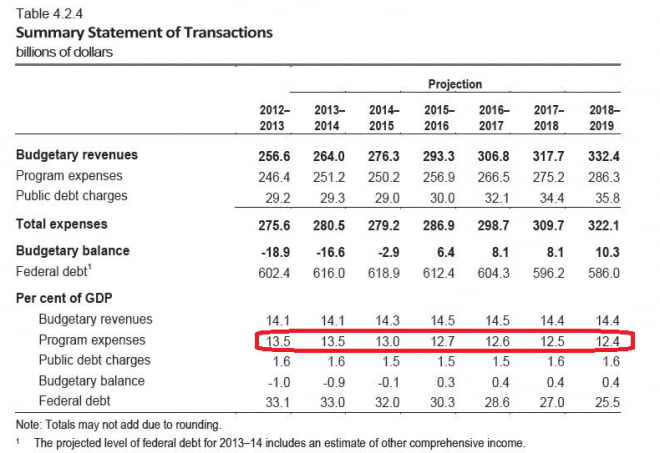 Breaking down the expenditure side shows where those cuts are expected to be made: 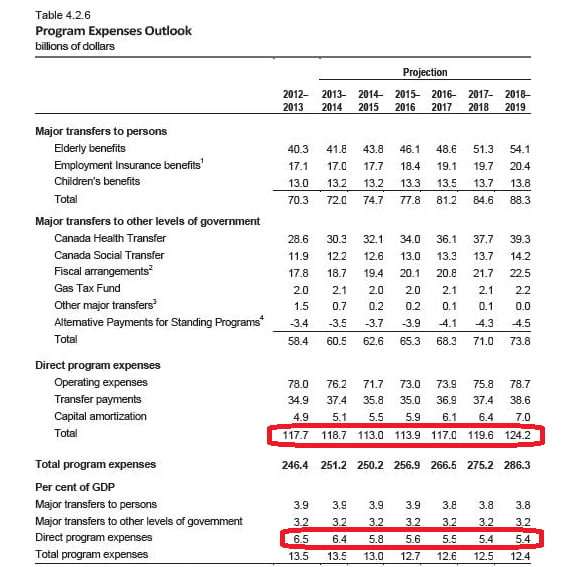 Regular Econowatch readers will recognize this pattern: the budget projections incorporate the Conservatives’ “starve the beast” strategy for reducing the size of the federal government. Implementing this strategy involves letting transfer payments to individuals (elderly benefits, child benefits and EI) and transfers to the provinces increase with the size of the economy, while keeping nominal expenditures on direct program spending roughly constant. This tactic forces a program of continued austerity on government operations as the economy grows and as costs rise. The 2014 budget is even more aggressive; it actually cuts direct program spending by $5 billion this year.

Although the opposition parties have been fiercely critical of this austerity program, I don’t recall seeing any firm commitments to reverse a significant number of these measures. Even if they don’t reverse the cuts that have been made, the more pressing question is whether or not the Liberals and NDP would keep in place the austerity measures that the Conservatives have planned for the future.

The projected surpluses disappear without those future spending cuts. The small surpluses that remain are largely driven by one-off measures such as asset sales; once they go away, so does the surplus.

So if the Liberals and NDP plan to campaign on platforms that involve new spending measures, they’ll have to make a hard choice. They must choose between the following options: