Alberta's carbon tax plan isn't revenue neutral. It should be.

A carbon tax is a poor way to raise government revenue. There are far better taxes on offer, let’s talk about those. 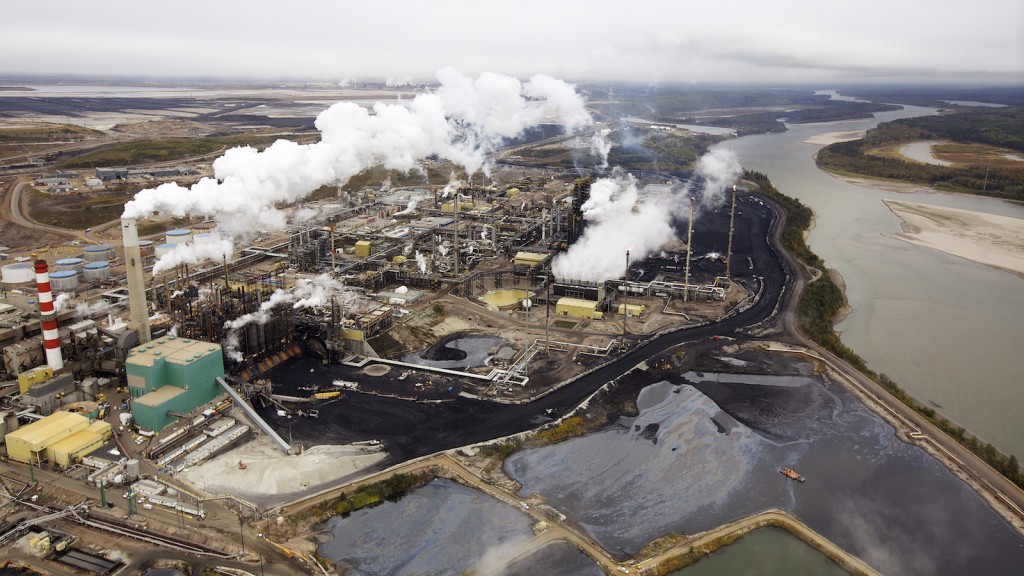 It’s been a week since Alberta announced its new carbon tax, and it’s fair to say the government succeeded in gaining broad support for the plan. Even the oil sector and the Calgary Chamber of Commerce are broadly supportive. The debate has quickly moved away from the merits of carbon pricing—which are strong—to certain details of the plan, such as what to do with the revenue. (For a taste of both sides, see this and this.) This is an important debate to have.

Alberta’s carbon tax plan isn’t revenue neutral. It should be; all the money raised should be returned to Alberta households and business by lowering other taxes.

But first, how much revenue are we talking about? Some say it’s $3 billion (see this) while others say it’s more like $6 billion (see this or this). Who’s right? The new tax will raise $6 billion in total once fully ramped up to $30 per tonne, but some figures subtract from this the roughly $3 billion that are automatically recycled as output subsidies to certain sectors. So, you have $3 billion left. (For more detail behind the output subsidies, see this.) These output subsidies account for nearly half of the total revenue of the carbon tax, so they provide a natural place to start our discussion.

The old and the new carbon tax

Alberta launched North America’s first carbon tax, not last Sunday but back in 2007 with the Specified Gas Emitters Regulation. It’s not widely known, since households and smaller businesses do not have to pay it. The tax is $15 per tonne on greenhouse gases emitted by (really) large emitters. In the summer of 2015, the government decided to eventually increase the tax to $30 per tonne. (For a detailed description, see this recently released report.)

There was one very odd, and very serious, problem with what was done with the revenue raised by this tax. Not only was it mostly returned to industry, but it was returned in a way that provided different subsidies to different firms. That is, the government effectively paid facilities some dollar amount per unit of output, and this dollar amount varied. (This was explicit, but it’s helpful to think of the policy as operating in this way.) This is a problem and distorts markets in a way that can result in lower productivity. Ideally, policy should be neutral across firms—treating everyone as similarly as possible. (For more on the importance of policy neutrality, see this report.)

As a rough approximation of the effect, I plot below the per-barrel subsidy implied by the previous carbon tax and compare it to the new one proposed last Sunday. (There are details to be worked out, and there will likely be different rates for different types of facilities, mining vs SAGD, and different rates for upgraders. Without further information, I can’t incorporate that aspect of the new plan in the graph. So, understand that the graph is just an illustration.) 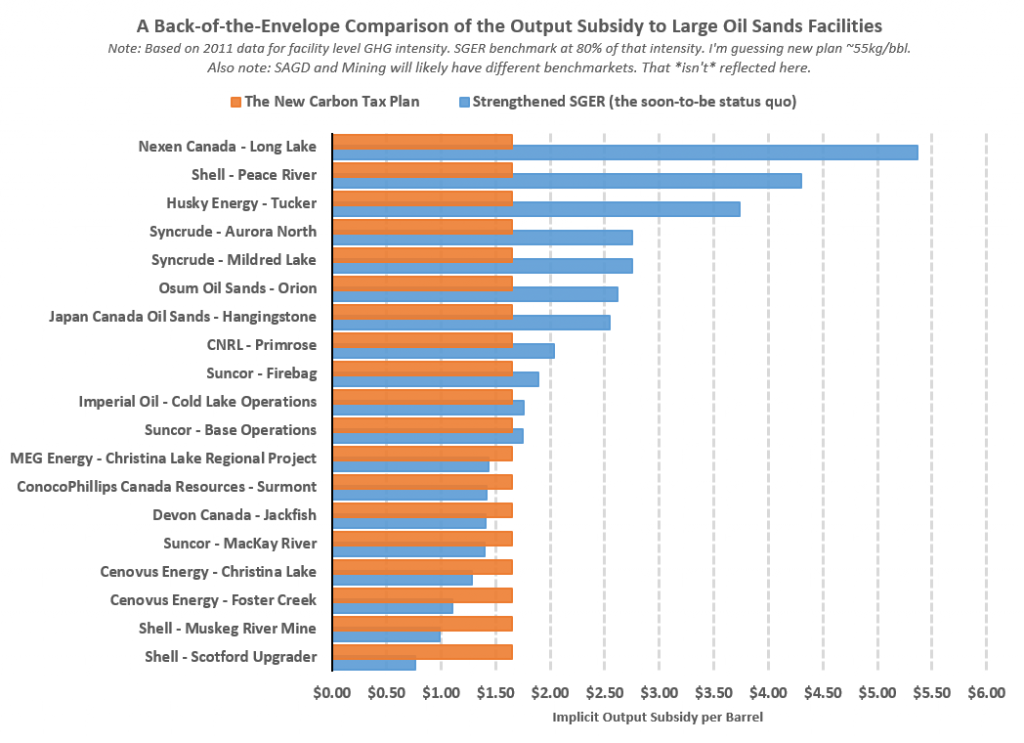 Under the pre-existing system (in blue), some firms received massive subsidies, many dollars per barrel, while others received far less. The reason for the difference was that the subsidy was meant to almost fully compensate for the costs of the carbon tax—on a firm-by-firm basis. The new tax (in orange) solves this, by making the subsidy much more uniform.

Overall, the total dollar amount of subsidies in each system is fairly similar. (The new carbon tax likely provides a small overall subsidy, but there isn’t the public data necessary to calculate this exactly.) The new system provides these subsidies in a far less distortionary way. This is a big improvement. Of course, it’s still a subsidy to some sectors and not others. Such preferential treatment is hopefully only temporary, and will be gradually phased out (as the climate panel recommends).

Let’s put these output subsidies aside and think about what to do with the rest of the money—about $3 billion. What should be done with this money is the big question up for debate. Let’s dive in.

Unpacking the case for revenue neutrality

There are basically two broad options to pick from. Should the carbon tax revenue be used to lower existing taxes? Or, should the government spend the money on its preferred projects?

A thought experiment is helpful here. Imagine that it’s Saturday, Nov. 21, 2015. Premier Rachel Notley stands before a crowd of supporters and announces that, effectively immediately, the tax on corporate profits will rise. Cheers erupt in some quarters, while sneers erupt in others. A vigorous debate about the merits of this decision is sure to follow.

The following day, at Edmonton’s Telus Science Centre, Premier Notley stands before another crowd for different policy announcement: Alberta will have a carbon tax. Not just any carbon tax, but a revenue-neutral one, where all proceeds from the tax go to lowering the tax on corporate profits. Economists rejoice; they praise the carbon tax plan and return to debating Saturday’s decision to raise corporate tax rates.

Contrast this alternative history with what actually took place. The premier announced a carbon tax on Sunday, but one that was not revenue-neutral. Was this any different than raising corporate income taxes on Saturday and bringing in a revenue neutral carbon tax on Sunday? No. In some sense, there’s no difference between a carbon tax that is revenue neutral and one that is not. (Hat-tip to Blake Shaffer, who recently tweeted this head scratcher.)

I’m no philosopher, but if a simple word game can change the way we think about revenue neutrality, then we’re probably missing something critical. Let’s try to dig deeper, be more precise, and explore what the key issue really is.

Let’s start with the case for spending the carbon tax revenue. Recently, David Roberts of Vox notes in a very well-articulated piece that Alberta’s carbon tax plan isn’t revenue neutral, it’s better. Why? Because, he argues, there are valuable uses of the carbon tax revenue. He goes so far as to say that R&D spending, climate mitigation projects, energy efficiency investments, public transportation, and many other line items, “all depend on the carbon revenue.” He’s mistaken.

While potentially laudable projects, they depend only on revenue, not carbon tax revenue. Any source of tax revenue will do, and not all taxes are created equal. So, what’s the most efficient way to fund government? … Income taxes? … Sales taxes? … Carbon taxes? If the answer isn’t a carbon tax, then we should want a revenue-neutral carbon pricing plan. To fund public spending, we should find revenue through other means.

The economic costs of different taxes

Carbon taxes are a bad way to raise revenue for (at least) two reasons. First, it’s less costly to raise government revenue from taxes that are broadly applied. This is an important reason why sales taxes are a fairly efficient source of funds. Carbon taxes, however, disproportionately fall on only a few activities—the emissions-intensive ones. This makes them a poor source of revenue. The second reason is more subtle. It turns out that carbon taxes also magnify the distortionary effect of existing taxes. Here’s some simple intuition. Income taxes lower employment and hours worked. That’s bad. Carbon taxes increase prices, which is somewhat like a reduction in wages. This lowers employment and hours worked even more, worsening the income tax’s original distortion. So, if carbon tax revenue isn’t offset by reductions in other taxes, the overall economic cost of the tax system goes up. (I’m cutting many corners in that description, but it’s a very well established result.)

How costly are different sources of taxation? Here’s some recent evidence by economists Bev Dahlby and Ergete Ferede, who find very large differences in what economists call the “marginal cost of public funds”. I display some below.

What do these numbers mean? If the marginal cost of raising public revenue is 1.71, then for each dollar of revenue raised by the government, $1.71 of private economic activity is displaced. In Alberta, corporate income taxes are a massively costly way to raise revenue.

Why are corporate income taxes such a bad source of funds? Imagine there was a tax on windows. Home builders would sensibly shrink the number in any new homes. Existing home owners may even board up the windows they already have. Corporate income taxes have similar effects. We tax profits here, and businesses shift profits and investments elsewhere. When you tax something, you get less of it. When you tax something that is highly mobile, you get a lot less of it. (Of course, there may be other considerations that motivate corporate income taxes, but we still need to be clear about what the costs of such a tax are.)

To shrink these distortions, we can use the carbon tax revenue to lower worse forms of taxation. To raise public funds for our preferred spending projects, we can use sales taxes.

But, let’s go to the logical extreme. Why just use the carbon tax revenue to lower highly distortionary pre-existing taxes? Why stop there? If some taxes are worse than others, then let’s lower the worst taxes, raise the relatively better taxes, and meet somewhere in the middle. You know you’ve reached the optimal tax mix once all taxes are equally costly ways of raising funds. Many (many, many) researchers have made that case. Alberta could benefit from higher sales taxes, lower corporate income taxes, less reliance on resource revenues, and so on. Obviously, politics makes this difficult. I don’t see many bumper stickers emblazoned with “Equalize the Marginal Cost of Public Funds!” Do you?

There was always a strong need to have a respectful conversation about the appropriate mix of taxes used to fund governments. After all, our government’s fiscal house is not in order (for more, see this or this). To call for revenue-neutrality in Alberta’s new carbon tax is not just to oppose increased government spending (which is a defensible position worthy of debate) but may also simply reflect a recognition that carbon taxes are a poor source of revenue. There are far better taxes on offer, let’s talk about those.