The former chairman of the U.S. Federal Reserve on halting the financial panic in 2008 and the fallout of the worst crisis since the Great Depression 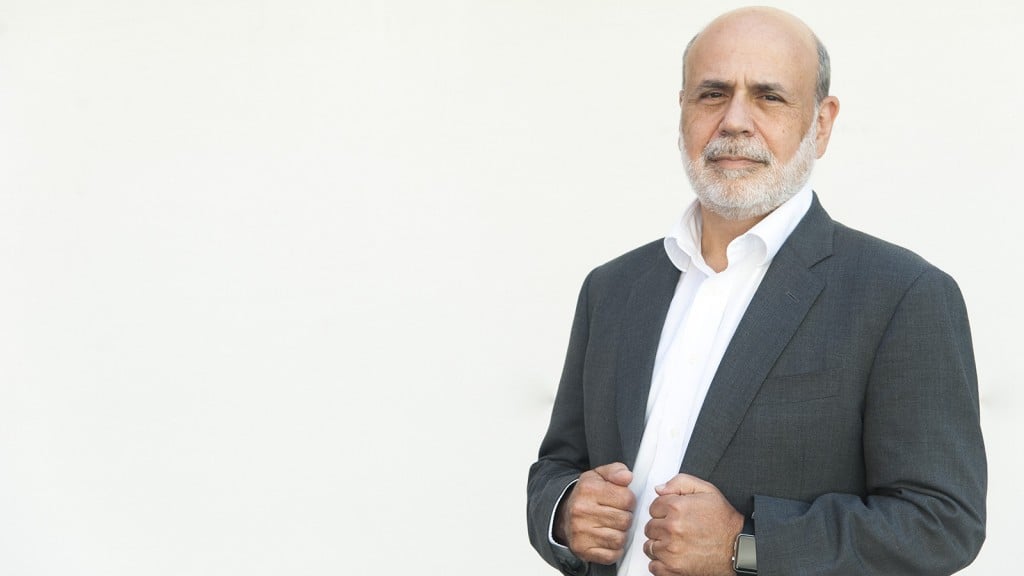 From 2006 to 2014, Ben Bernanke served as the chairman of the U.S. Federal Reserve, a period marked by the worst financial crisis since the Great Depression. His new book, The Courage to Act: A Memoir of a Crisis and its Aftermath, tells the story of the efforts by officials to halt the panic in 2008 and rescue the U.S. economy.

Q: Looking back, how close did the U.S. come to experiencing another Great Depression?

A: I think the risk was quite high, based on historical experience and on the reaction of the economy to the intensification of the panic in the fall of 2008. We saw a tremendous contraction in jobs and GDP growth in the fourth quarter of 2008 and the first quarter of 2009, before the crisis was stabilized.

Q: At the time, did you think another Depression was looming?

A: I certainly thought it was a realistic possibility, and I don’t know how much of a probability of Depression you want before you work really hard to avoid it. I did think the collapse of the financial system would have serious effects on the economy, and what we saw in the fall of ’08 and the spring of ’09 confirmed how powerful those effects were.

Q: What was the darkest moment for you?

A: The worst moment was probably the famous Lehman weekend [Sept. 13 to 15, 2008], when I learned that, despite all our best efforts, we had no way to save Lehman. The concern was not about the company itself, but rather that its failure would greatly worsen the panic that was under way.

Q: In your book, you describe it as a “terrible, almost surreal moment,” and that America was staring “into the abyss.” What made that worse than other moments in the crisis?

A: It was the only case where we weren’t able to come up with some solution. Bear Stearns was acquired by J.P. Morgan with Fed help [on March 16, 2008]. We averted the kind of panic at that stage that we would get later in September ’08. And then, subsequently, we had very tough moments in September with AIG. But Lehman was the only big financial firm to collapse.

Q: That was 2008. The U.S. has had interest rates at near zero for seven years. Monetary stimulus has added trillions to the Fed’s balance sheet. So why is the economy still so weak?

A: Well, the Fed can do two things: It can help the economy recover from recession, and it can keep inflation low and stable. Inflation is certainly low and stable—in fact, below the two per cent target—and, measured in unemployment and labour-market slack, the economy has made a lot of progress. The pace of growth is disappointingly slow, mostly because productivity growth has been very slow, which is not really something amenable to monetary policy. It comes from changes in technology, changes in worker skills and a variety of other things, but not monetary policy, in particular. You say the economy is so weak. It’s certainly not where we would like it to be, but if you compare it to Europe or Japan, other industrial economies, they have done much worse.

Q: Looking back, what would you have done differently in your response to the crisis?

A: If anything, it could have been even a bit more aggressive. I think the one point you could also make is that the Federal Reserve has been bearing most of the burden, and there are limits to what monetary policy can do. We would have been better off with a more balanced policy approach involving both monetary and fiscal policy.

A: It was not only the initial stimulus, which was actually helpful, but, after 2010, fiscal policy got fairly contractionary, with almost no job growth in the public sector. Also, the fiscal policy-makers have actually been doing damage to the recovery, with things like coming close to not raising the debt ceiling.

A: It depends on the fiscal condition of the country.  If you’re Greece, there’s not a lot of scope for using fiscal policy to help you grow, because you don’t have the fiscal space. But the United States could have been less restrictive on fiscal policy from 2010 to 2014. So if a country has scope to use fiscal policy, I think there’s an argument for having a better balance between monetary and fiscal policy.

Q: What about Canada?

A: I’m not just being coy; I don’t think I know enough about it to say anything smart.

Q: Let’s go back to before the crisis. You’ve taken heat for dismissing the housing bubble. How much of that was you not seeing the bubble, versus you not wanting to panic people by talking about it as such?

A: We certainly knew house prices were very high, and understood there was a good chance they would have to come back down. We also understood that subprime mortgages—I’m talking now about after I became chairman in 2006—were failing at increasing numbers. But what we missed was really the possibility that the losses in subprime mortgages would create a financial panic that would almost bring down the financial system. If it hadn’t been for the panic, I don’t think the implications for the broader economy would have been nearly so large.

Q: In the book, you argue that the panic itself caused more damage to the economy than the actual trigger, the housing bubble. But how can you separate the two, because the panic was a response to nobody knowing the value of those toxic assets created in the bubble?

A: That’s right, but financial panics typically start with some kind of trigger, which creates uncertainty. If the financial system is vulnerable or weak enough, it can spread into a forest fire of a panic. The fear of subprime losses led investors to stay away from any kind of credit product, even things like credit cards and automobile credit that actually did fine. So it was the panic throughout the system that was the really costly part of the collapse. Of course, the housing collapse was important, too, but the collapse in jobs didn’t happen until after Lehman, and then it was intense. Meanwhile, house prices actually weren’t falling very quickly, but after Lehman, and after the crisis intensified, that’s when house prices really began to fall sharply. So it was the intensification of the panic in September of  ’08 that really led to the very sharp decline in the U.S. economy.

Q: What damage did the bank bailouts do to Americans’ trust in the financial system?

A: There was certainly some negative political reaction, which I fully understand. People were very unhappy with the fact that the economy was doing so poorly, and they were having difficulty finding work or paying the bills. They were very resentful that it looked like the Wall Street firms were getting help, but they weren’t. So I’m totally sympathetic to that, and I understand the anger. I’m hopeful that as the economy gets better, and the rules that were put in place make the financial system safer, people will appreciate that what was done was necessary for the stability of the overall economy.

Q: In a recent interview, you said somebody should have gone to jail for causing the crisis. Why haven’t they?

A: What the Department of Justice [DOJ] did was essentially not prosecute or pursue individuals—not necessarily executives, but traders or anybody. Instead, they prosecuted or extracted fines from large financial institutions. If laws were broken, or if bad practices were promulgated, they were done by some individual. So the DOJ should have pursued the individuals.

Q: Yet the DOJ argued it would create financial uncertainty and hurt the economy.

A: That’s quite the contrary. Exacting big fines on big banks cuts into their capital and makes them a little bit less stable, whereas going after individuals shouldn’t have any adverse effect on the institutions themselves.

Q: The Bank of Canada has cut rates twice this year, as have other countries, making it harder for U.S. exporters to compete. What challenge is this posing for the Fed?

A: Of course, weaker currencies abroad mean a strong dollar, and a stronger dollar, together with a weak global environment, is a drag on the U.S. economy. So it’s important, as it affects overall levels of production and employment in the U.S. It’s not the only factor. There are many domestic industries doing well in the United States, notwithstanding a strong dollar. But the Fed will have to pay attention to what’s happening outside the country and with the dollar, because exports are one of the sources of demand for U.S. goods and services. So, to the extent that that’s slowing the U.S. economy, that’s something that the Fed has to take into account.

Q: Is there a risk of currency wars?

A: No, I don’t think so. To the extent that a country changes its monetary policy and weakens its currency, that is going to take exports away from other countries, it’s true, but the easier monetary policy strengthens the domestic economy of that country. That’s actually an offset. It provides more demand for foreign goods and services. So the view held by the G7 and other international groups is that changes in currencies created by monetary policy are not a form of currency war.

Q: But isn’t there a risk of a race to the bottom as central banks cut to counter each other?

A: Again, they’re not working against each other. If two countries both ease monetary policy, their relative currencies shouldn’t change very much, because they’re both eased. But you get more demand in both, so you should get a win-win situation there.

Q: The U.S. is already at zero, though; it can’t cut anymore.

A: It’s only a problem to the extent that it prevents the overall U.S. economy from recovering. If the Fed determined, hypothetically, that because of the strong dollar, the U.S. economy couldn’t recover, it could postpone any rate increases. That would amount to a form of easing.

Q: As a student of history, you know how the understanding of a crisis can change over ensuing decades. What do you hope your legacy will be when people look back at your time at the Fed?

A: I think we used the lessons of classic financial panics to understand and respond to this panic, and we demonstrated the importance of both a strong financial system and an effective response to a financial crisis. We did succeed in stopping the crisis and in helping the economy return to where we’re currently, about five per cent of employment, so that’s what we accomplished. We also increased the transparency of the Fed, for example, introducing things like press conferences and other kinds of public communication. And of course we demonstrated that even when interest rates get close to zero, there’s still more the Fed can do—we used quantitative easing and forward guidance to provide more stimulus and helped the economy recover.