Analysis: The Trudeau government is banking on greater spending by indebted households, while pushing back spending on infrastructure. Both pose problems. 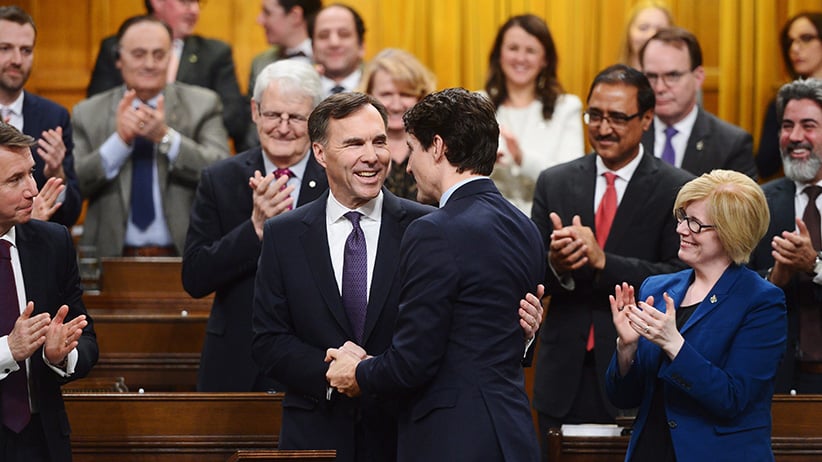 With most of the new measures in Budget 2018 having been leaked prior to its publication, there isn’t much to write home about in terms of policy surprises in Tuesday’s budget release. And deficits as far as the eye can see along with a falling debt-to-GDP ratio are no surprise either (Chart 1). But with the outlook for revenues being optimistic and for spending being uncharacteristically low, there is plenty of scope to ‘kick the tires’ on a budget forecast that may ultimately turn out to be a bit of a lemon. 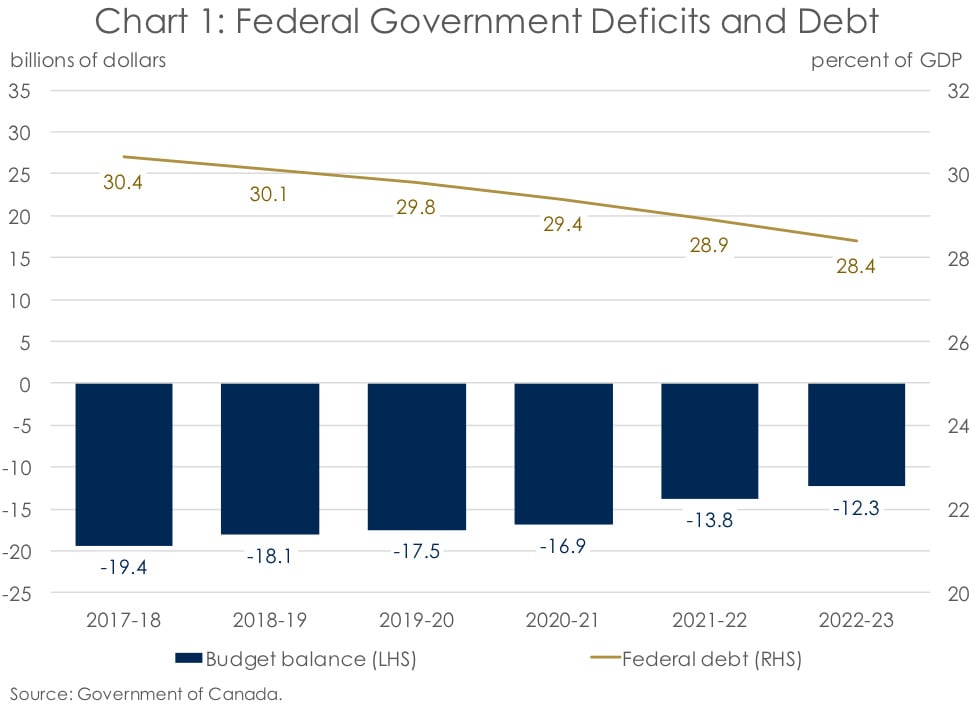 After a bumper year in 2017, growth in the Canadian economy is set to slow over the next five years of the federal government’s forecast. Indeed, the feds are now expecting nominal GDP–the broadest measure of Canada’s tax base–to come in at a modestly lower level than anticipated in the Fall Economic Statement 2017 (FES 2017). Beyond that, while the government’s survey of private-sector economists suggests the risks to the economic outlook are broadly balanced, the fact that the Bank of Canada has flagged things like NAFTA and high levels of household debt as going concerns suggests the risks to the economic outlook are tilted to the downside. Further, interest rates are on the rise both in Canada and around the world, meaning households are going to be increasingly restrained in how much wiggle room they’ll have to spend as borrowing costs continue to rise.

Typically, a lower level of nominal GDP means a lower level of revenues. But not if you’re the federal government (Chart 2). Instead, after weaker-than-expected revenues in the 2017-18 and 2018-19 fiscal years, the feds are anticipating their take thereafter to come in better-than-prognosticated back in the fall of 2017. A portion of this improved outlook is thanks to new revenue raising measures, such as the changes to the taxation of passive income on the holdings of private corporations and closing tax loopholes. However, much of these higher revenues are chalked up to a projected strengthening in consumption leading to a rising GST take. But given the current backdrop of highly-indebted households and rising interest rates, this may prove very optimistic. The government is also baking in some proceeds from cannabis legalization, although the estimate is vague and the take highly uncertain. Taken together, this suggests that the federal government’s outlook for tax revenues is a bit on the rosy side. 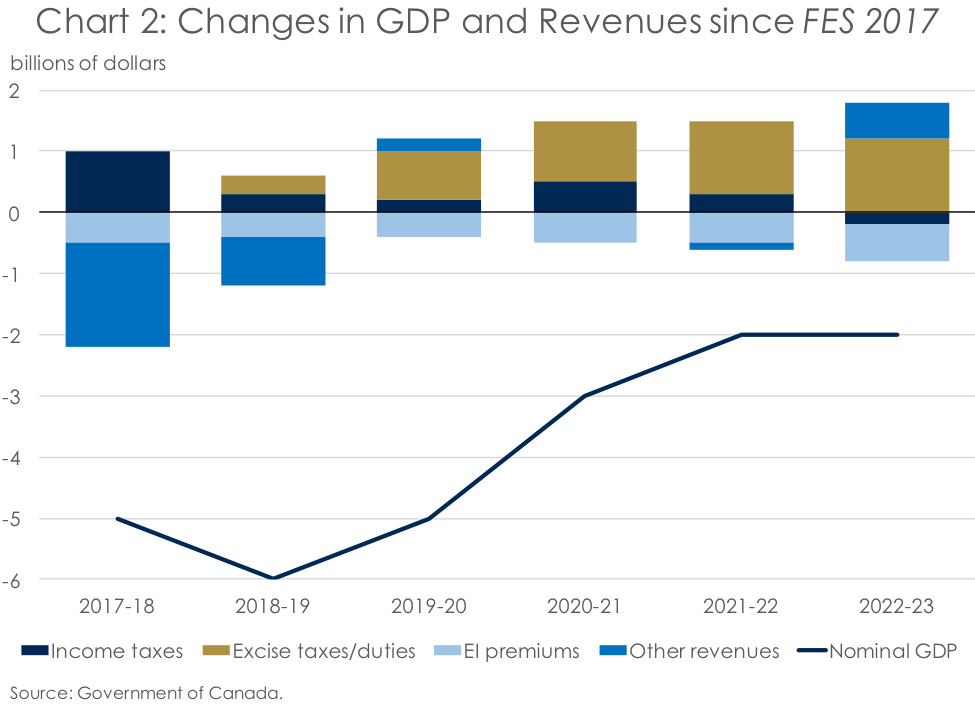 Going from ‘sunny ways’ to saving for rainy days

But even if the outlook for revenues is a bit ‘sunny ways’, the feds are assuring us that they are going to be setting some funds aside for rainy days. Spending, we are told, is going to be deeply constrained, and in an election year no less. Indeed, almost all of the additional fiscal room the federal government found for new spending in Budget 2018 came from a lower profile for Direct Program Expenses (DPE)–the part of federal spending over which the government exercises the most control. The feds are forecasting that this spending profile will be lower over the forecast than in the FES 2017, with this ‘soft austerity’ generating average annual savings of $2.7 billion (Chart 3). And while part of this is tied to one-time spending on veteran pensions and an attempted repair of the Phoenix pay system, the outlook for DPE growth remains austere relative to what Canadians have come to expect. 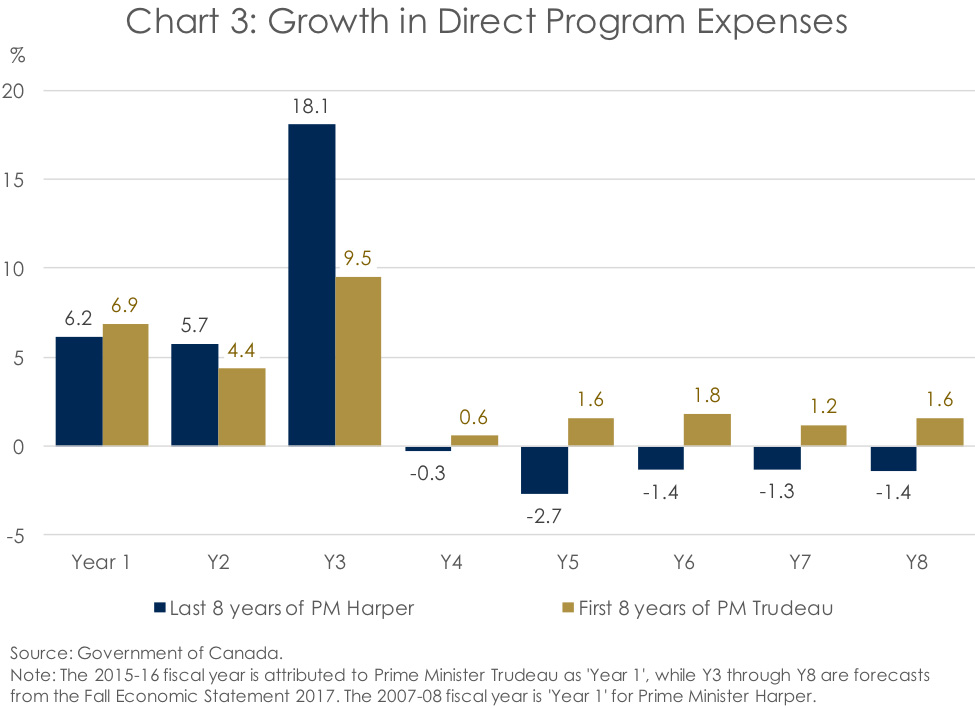 So, what’s under the hood of the feds new-found fiscal room? In the early years of the outlook, much of this saving is expected to come from unspent infrastructure dollars. Starting in the current fiscal year (2017-18) and next (2018-19), the feds are intending to leave about $2.4 billion in planned infrastructure investment unspent in each year respectively (Chart 4). This is not a good news story for the government, as it reflects its inability to get this money out the door and get shovels in the ground. And while some of this investment is forecast to materialize in later fiscal years, the feds now expect total infrastructure spending through the 2022-23 fiscal year to be $2.5 billion lower than was expected as recently as fall 2017 (Chart 4). 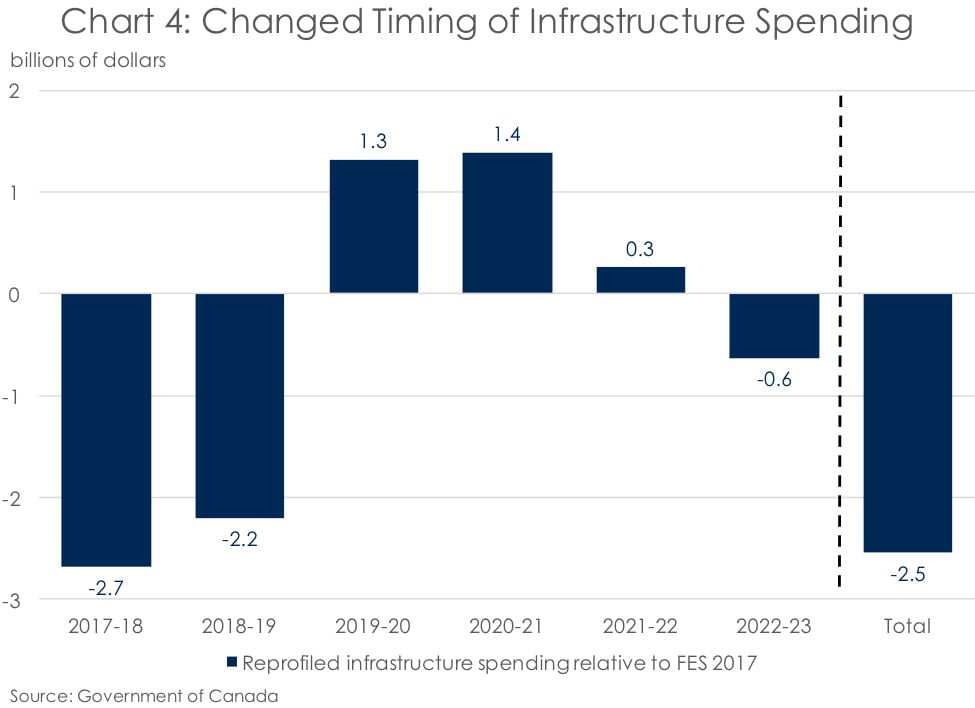 But an inability to deliver on infrastructure isn’t the only saving the federal government is anticipating. Operating expenses, which “reflect the cost of doing business for more than 100 government departments, agencies and Crown corporations,” is expected to drop from $93.1 billion in fiscal 2018-19 to $92.3 in the 2019-20 fiscal year—a drop of nearly $1 billion (Chart 5)! And it’s serendipitous that these savings happen to land in an election year, the cost of which is likely to come in around $400 million (based on costs occurred in the past two elections). So, where are these savings expected to come from? Your guess is as good as mine. Apparently, some of it is going to come from the feds lower anticipated expenses related to pensions and employee future benefits. But that’s hardly enough to explain the difference. 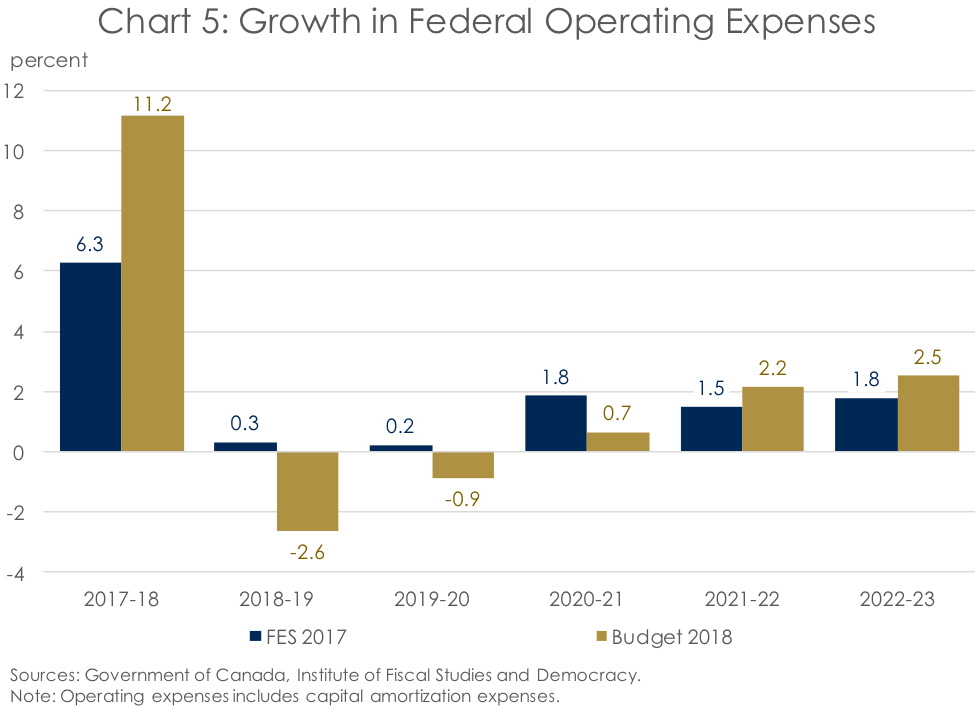 In sum, the fiscal outlook in Budget 2018 is just about as good as it can get for the federal government. But with an election year fast approaching and storm clouds on the economic horizon, ‘sunny ways’ may turn to rainy days faster than you can say “deficits”. It would therefore be prudent for the federal government track a fiscal target that is more stringent than a falling debt-to-GDP ratio. But don’t plan on it anytime soon.