Canada needs a coronavirus stimulus plan. Here's what it should look like.

As the stock market crashes and oil prices plunge, experts agree fiscal stimulus is needed, but differ on how big it should be and what form it should take 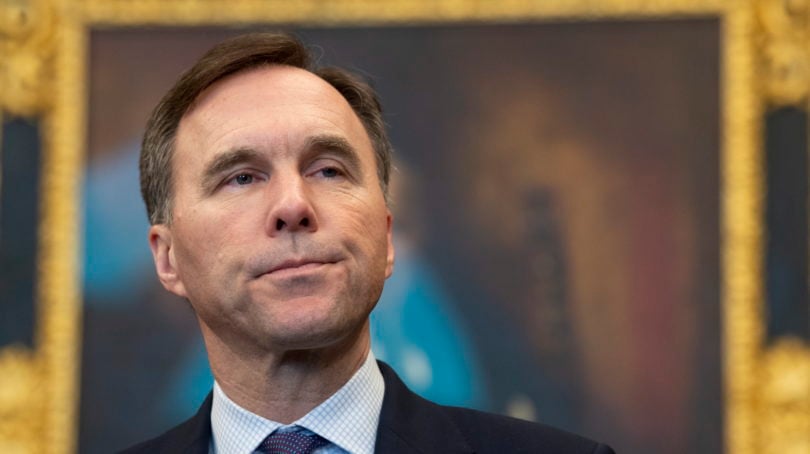 Until a little over a week ago the biggest viral outbreak facing the world was COVID-19. Officials now face a new and just as unpredictable contagion — fear. The threat of that anxiety further roiling markets and tipping economies into recession becomes more apparent by the day. And Canada in particular looks deeply vulnerable to a painful downturn.

After a week of stock market volatility, Monday unleashed the worst carnage since the virus began to spread from China across the globe. Oil plunged 24 per cent after Saudi Arabia triggered a price war against Russia, which drove the resource-heavy S&P/TSX Composite Index down more than 10 per cent, its worst one-day performance since markets crashed in October 1987. Some major Canadian energy producers saw tens of billions of market value wiped out in a single day — shares in Cenovus fell more than 50 per cent. Meanwhile the collapse in oil prices hammered the Canadian dollar down to 73 cents U.S., four full cents lower than where it stood at the beginning of the year.

Most of the world’s central banks have responded by slashing interest rates. Last week the Bank of Canada joined them with a 50 basis point cut. But while more rate cuts are expected, the ability of central banks to tackle this particularly type of crisis — supply chains have been crippled and consumers are increasingly afraid of simply going out to spend — is seen as limited. “With interest rates already so low to begin with you’re just pushing on a string with rate cuts,” says Kevin Milligan, an economics professor at the University of British Columbia. “It takes months for investment patterns to change, and that doesn’t help when something is hitting you in the short run.”

READ MORE: Do we really expect Canadian households to bail out the economy again?

Which is why a growing chorus of economists and investors are calling on Finance Minister Bill Morneau to roll out a fiscal stimulus plan, spending heavily to shore up Canada’s economy. Morneau was already set to release the Liberals’ first re-election budget, likely at the end of March. On Monday he acknowledged Canada was in a “very volatile position” and said the federal government has the “capacity to deal with challenges exactly like this” and will introduce measures this week.

But what should those stimulus efforts look like? Maclean’s spoke with four economy watchers about what a fiscal plan for Canada’s battered economy should entail.

A fiscal stimulus plan is needed “without a shadow of a doubt,” says Tedds, and Morneau needs to act “now, this has to be today.” Tedds, who likens the current situation to the period immediately after the Sept. 11 terrorist attacks because of the suddenness of the crisis, said Morneau should shelve his current budget and release an economic statement that focuses on several specific measures.

“There needs to be a full blown package for health care,” she says. “Don’t even worry about saying what it’s going to be for, just get billions of dollars to the provinces for health care, for testing equipment, building hospitals, whatever.” She says plans should also be made to convert schools across the country to quarantine zones, with an eye to the virus spreading more rapidly north from the U.S. “The U.S. is our hot zone,” she says. “We have this well under control, but they don’t, and that’s where our cases are going to come from.”

Another priority for Tedds is to get money directly into peoples’ hands. One way to do that is with a “crisis top up” for the next GST tax credit payment due out next month. Likewise Canada’s Employment Insurance benefits for sick leave are “a mess” since the money typically doesn’t get to recipients until they’ve returned to work. “Let’s get everyone 14 days of paid sick leave,” she says. But Tedds cautions against pursuing the type of boutique tax credits rolled out by the previous Harper government in its 2009 stimulus plan. “Don’t encourage people to renovate their houses or do anything to tie the money to something specific,” she says. “.Just get the money into peoples’ hands and let them spend it.”

The oil price crash has adds immediate pressure, she says. “If this goes on more than a week, we’ll have bankruptcies happening in this town,” she says. “It’s going to be a bloodbath and I don’t need people in Ontario and Quebec rolling their eyeballs, this is serious.”

READ MORE: Coronavirus latest news: Updates from Canada and around the world

Ottawa should take a layered approach to its stimulus plan for Canada, says Milligan. The first and most immediate layer involves ensuring there are no short-run liquidity issues in the financial sector, which could lead credit markets to seize up. The responsibility for that lies with the Bank of Canada, but Morneau should be involved in that, he says.

Layer two should focus on loan guarantees and short-run financial assistance for industries directly affected by the virus, like airlines, transportation and logistics. “You want to make sure on the business side companies have access to borrowing and can make payroll to their employees,” he says. “I’d hope to see a package about that very soon.”

The third layer would be a more of a general fiscal stimulus program, though he says he’s “not completely sold on the case for that yet.” As Milligan sees it, the problem is that people aren’t spending, but what’s important is why. “If it’s someone in the service industry who’s seen their income go down temporarily, that’s something the government  can smooth over,” he says. “But if it’s people who don’t want to go outside and spend money, that’s hard to fix by putting more money in their pocket.”

If Ottawa decides to go ahead with a general stimulus plan, it should be designed to get money into people’s pockets in the short run. “You can’t do something that takes eight months to design,” he says. Like Tedds, he suggests “supersizing” existing refundable tax credits like the GST or Canada child benefit.

Another faster option, however, would be for the Canada Revenue Agency to adjust the schedule employers must follow in withholding income tax from peoples’ paycheques. By delaying the amount of taxes withheld in the short term “that would mean paycheques would grow in the short term, even though employees are getting paid the same.”

Whatever decision Ottawa takes, he expects it will be met with “partisan rhetoric about the horrors of large deficits.” Last week Pat Kelly, the Conservative Party’s associate finance critic, said Canada’s fiscal “cupboard is bare.” That’s “entirely false,” says Milligan. Even if there’s a case to be made that Canada should push towards zero deficits in the long term, there is nothing whatsoever limiting Canada’s borrowing capacity now. “We have interest rates super low which is the markets saying go ahead and borrow, we trust you to pay it back,” he says.

READ MORE: Taking things day-by-day during the end of days

The federal government has an important role to play in easing the regional impact of the oil crash and targeted measures to deal with a coronavirus-related slowdown, says Porter, but there are important limits to what Ottawa should try to do.  “I think there is an argument for the government to get ahead of this and be prepared to do more if need be,” he says. “But there is the possibility that they could overdo it.”

What he’d like to see is direct support measures for provinces hurt by oil’s decline. Another consideration is targeted support for sectors hit by the virus. As for consumers, “some kind of tax rebate or income support to support consumer sentiment and spending” will be necessary.

However because “sentiment could turn very quickly” in the months ahead, he cautions Morneau against locking the government into a stimulus program that could take months to unfold. “They have to fight against the desire to build in some big, long term spending program,” he says. “I do think this is a relatively short-lived event we’re dealing with.” That doesn’t mean there won’t be long-lasting effects on the economy, he adds, but within a year he expects the economy will have begun to move on from this upheaval. “We came into this with a structural deficit and you don’t want to build an even larger structural deficit into the finances,” he says.

Alberta needs Ottawa to unleash “a massive fiscal project” in order to help Alberta through the crisis it faces. “Maybe $5 billion or $10 billion, and that needs to start next week.”

Pelletier would like to see a large part of it directed at infrastructure, though he  says the money needn’t be focussed on Western Canada’s energy sector — rather, it could go to building out high speed internet and the technology sector.

Ottawa should also direct health care funding to Alberta. “Tie it to resolving the doctor dispute and making sure there are no nurses let go,” he says. Do it across the country, not just Alberta. Get ahead of this thing and don’t let it escalate.”

Having Ottawa take bold measures in an emergency stimulus budget that helps Alberta and Saskatchewan through the oil crisis would also have the added benefit of “building up national unity,” he says.