Econo-metrics: Wage growth may finally be improving, but the Bank of Canada will need to see a lot more of that before it raises rates again 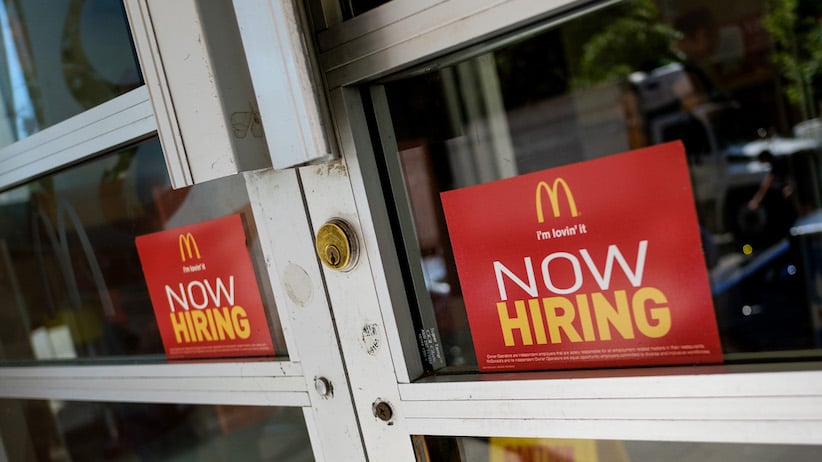 Nothing wrong with that. But the feature number in StatsCan’s monthly data dump on employment masks weakness below the surface.

Why the latest jobs numbers matter

Headline employment numbers in Canada have been strong for a while: StatsCan estimates that 22,000 Canadians found jobs in August, the ninth-consecutive monthly gain. Yet, the Bank of Canada is less than enthusiastic about the labour market. The central bank’s decision to raise interest rates on Sept. 6 was a nod to supercharged economic growth in the second quarter. But policy makers left a strong hint that they are inclined to leave their benchmark rate at its current (and still very low) setting of one percent for a while. They said in their statement that future policy will be contingent on a handful of factors, including the “evolution” of “labour market conditions.”

READ: That was probably it for interest rate hikes in Canada for a while

Bank of Canada Governor Stephen Poloz wouldn’t be the first central bank chief to ignore headline hiring data. In the U.S., Federal Reserve Chair Janet Yellen dismissed a plunging unemployment rate, arguing that a series of sub-indicators offered a truer picture of what was happening in the labour market. To press her point, she introduced to the public a “dashboard” of some of the more granular data she uses to study the economy.

Poloz hasn’t done that yet. But the central bank has offered clues in recent months about the indicators that it’s watching the closes. Poloz’s dashboard probably includes these three gauges: long-term unemployment, wages, and average hours worked.

The unemployment rate is low, but there still are too many Canadians who are struggling to find work. 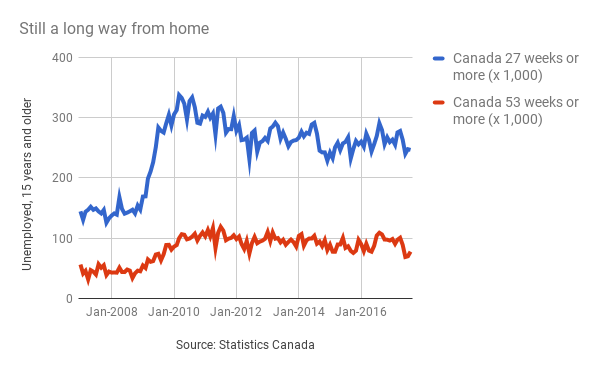 Stagnant wages represent one of the most important macroeconomic stories of the post-crisis era. Below is a picture of the situation in Canada, based on figures in StatCan’s survey of households. The graph traces the monthly percentage gain in average hourly earnings from the previous year, starting in January 2007 and moving through to the most recent figures. There is a chance we are seeing a turn, as wage growth has popped in recent months. But there is a lot of ground to make up. Canadian pay increases are about the same as inflation—in other words, weak—which helps explain why consumer spending has been so dependent on borrowing. 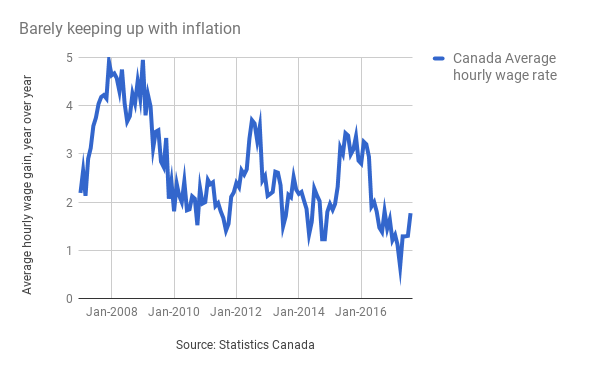 The Bank of Canada said explicitly in its last quarterly economic report that it was troubled by weakness in the average number of hours Canadians work each week. There is a hint of recent improvement, but recent history leaves reason to doubt whether that will last. The figures are volatile, but the trend since 2010 shows we’re working less. That means the economy is performing below its potential. 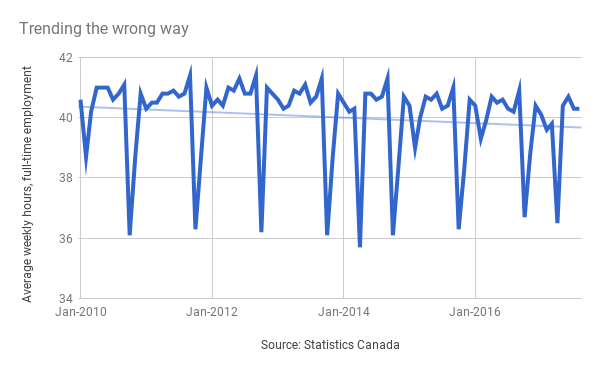 Navdeep Bains, the federal economy minister, liked the numbers. “Another month of growth in #jobs,” he tweeted. “Canada has added almost 400,000 jobs in the last twelve months. We’re investing in middle class.”

Bains exaggerated a little: the actual 12-month increase in hiring was 374,000, according to StatsCan. Still, it’s more evidence that the Canadian economy is on a hot streak. The unemployment rate is unusually low, according to StatsCan records that date to 1976. Canada’s jobless rate tends to settle in the 7-per-cent range; the only time it dropped below 6 percent was during a stretch between the end of 2007 and early 2008. (The record low was 5.8 percent in October 2007.) But the unemployment rate could be headed that way.

Poloz’s Dashboard will be showing some warning lights. Long-term unemployment remains elevated, a terrible indicator because research shows that the longer people remain on the sidelines, the harder it becomes to return. In other words, Canada’s growth spurt over the past year has left people behind. A long period of lacklustre wage growth suggests the only way households can satisfy their spending habits is to keep adding to Canada’s record pile of private debt. And even though more Canadians are working, companies aren’t finding as much for them to do as they have in the past, according to the actual number of hours worked.

Many on Bay Street are convinced the Bank of Canada is on track to carry on raising interest rates. (That’s the reason the dollar surged this week.) But don’t bet on that. The central bank noted in its interest-rate decision that it would be watching labour-market conditions for a reason. Poloz and his advisers are concerned by what’s happening below the surface, and they are prepared to let the economy run a little hot if they think faster growth will create more jobs and boost incomes. The latest employment data show the economy has room to run before inflation becomes a serious concern.