Another measure of the severity of the eurozone crisis: Olive oil prices

The price of olive oil has been crashing, as Spaniards, Italians and Greeks switch en masse to cheaper soya and sunflower oils.

When analysts talk about an oil crisis, it’s usually to complain about pain at the pump. But Europe is facing a different kind of oil panic. The price of olive oil has been crashing, as Spaniards, Italians and Greeks switch en masse to cheaper soya and sunflower oils.

Extra-virgin olive oil has fallen to below $3,000 a ton during the past year, half its 2005 price, and its lowest level in a decade, according to the International Monetary Fund.

In Italy, pasta’s heartland, prices dropped 38 per cent in the past year alone. Europe’s Mediterranean countries have been rocked by Europe’s fiscal crisis; in both Greece and Spain, the unemployment rate tops 20 per cent.

According to the IMF, olive oil prices have dipped almost as low as they did during the height of the financial crisis in 2008 and 2009, another sign of the severity of the current eurozone crisis: 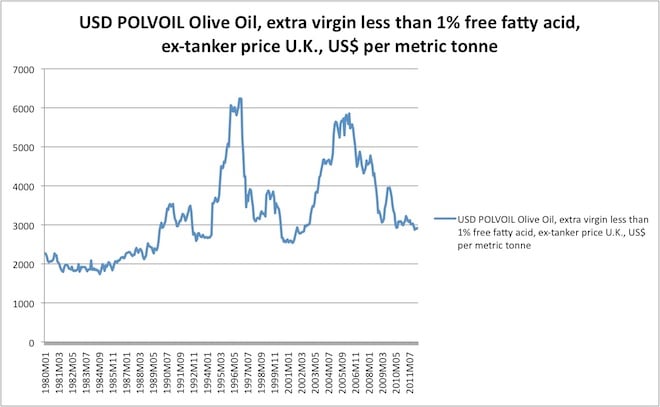 The European Union has been pushing companies to stockpile olive oil to keep prices from falling, to little success, and the crisis isn’t contained to Europe. Olive oil imports to Canada are down 20 per cent this year. There is one bright spot in the global run on olive oil: emerging markets are developing a taste for extra-virgin oil. In China, demand is up 25 per cent.