Econo-metrics: If the U.S. list of objectives for NAFTA talks represents what Trump wants to achieve, Canada’s negotiators have a fight on their hands

On Monday Donald Trump’s administration released its objectives for the coming renegotiation of the North American Free Trade Agreement, as required by U.S. law. Congress has 30 days to consider the agenda. Talks between the U.S., Canada and Mexico can now begin by the middle of August.

It is too early to separate tactics from aspirations. Still, the 17-page outline represents a new life for grievances that U.S. business interests have harboured against Canada and Mexico for decades. Earlier this year, Trump suggested that Canada-U.S. trade needed little more than a tweak. His starting point for the NAFTA negotiations suggest that he’s become more ambitious.

READ MORE: The next big federal election will be about Trump and trade

Back in the 1980s, the attraction of a free-trade agreement with the U.S. for Canada was the chance to obtain a shield from Washington’s capricious application of punitive duties. Canada failed to win full cover, but it did secure a degree of protection that was extended to NAFTA.

Chapter 19 of NAFTA allows the signatories to appeal protectionist or retaliatory measures at a quasi-judicial panel. NAFTA also guards against friendly fire: if one of the signatories launches a trade assault on a group of countries, the other two NAFTA countries will be spared. Trump wants to scrap both of these provisions in favour of a new approach to dispute resolution. Trade experts say Chapter 19 could be a red line for Canada.

Trump and his top trade negotiator, U.S. Trade Representative Robert Lighthizer, justify their revival of protectionism by pointing to the big gap between American imports and exports. Most economists call their argument specious. The Trump administration doesn’t care. The first line of the negotiating plan says the U.S. objective will be to “improve” the U.S. trade balance and “reduce” the trade deficit with Canada and Mexico. The preamble adds colour. “Since the deal came into force in 1994, trade deficits have exploded, thousands of factories have closed, and millions of Americans have found themselves stranded, no longer able to utilize the skills for which they had been trained,” the document says. And: “The new NAFTA will be modernized to reflect 21st century standards and will reflect a fairer deal, addressing America’s persistent trade imbalances in North America.”

So what? A successful negotiation for Trump will be convincing evidence that the U.S. trade deficit will narrow. 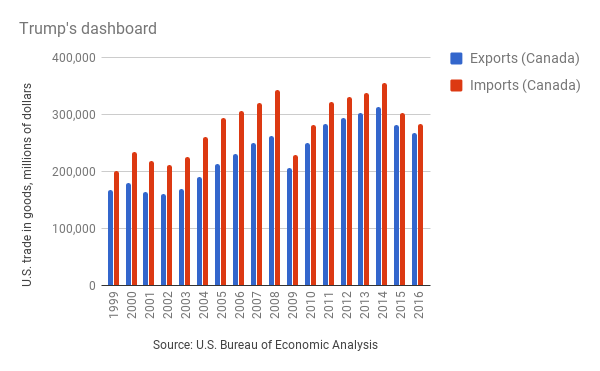 The closest observers of trade politics and policy were mostly unmoved by Trump’s negotiating list, however normal people might be surprised to learn that Canada’s bankers have as much reason to fret as loggers and dairy farmers. The document makes specific mention of winning increased access for American financial institutions, and calls for the elimination, or at least the reduction, of limits on international investment.

For decades, Canada’s biggest banks were allowed to fatten behind a thicket of rules that deterred international competition. Among those rules are strict ownership limits that prevent a single shareholder from gaining control of any of the banks. That was less an issue when Canada’s banks were mostly focused on fighting for turf at home. But the Canadian market is now saturated. Royal Bank, Toronto-Dominion, Bank of Montreal and Canadian Imperial Bank of Commerce all have been buying American banks in recent years in order to grow. Yet their U.S. rivals effectively are blocked from entering Canada in a meaningful way. Trump might have heard about this: three of his closest advisers used to work for Goldman Sachs, the global investment bank based in New York.

The outline is vague, suggesting it’s too soon to panic. The Financial Times reported that the White House still hasn’t settled on its actual negotiating stance. Other observers noted that some of the language, including around e-commerce, resembles sections of the Trans-Pacific Partnership, which Canada and Mexico still support.

Trump also proposes making side deals on labour rights and the environment part of the main agreement. This could be a ploy to squeeze Mexico, as tougher standards would hurt its competitiveness. But stronger labour provisions and making NAFTA greener fit with Prime Minister Justin Trudeau’s push for “progressive” trade agreements. Also, many Canadians will cheer Trump’s objectives—foreign ownership limits coddle big Canadian companies, reducing innovation and inflating prices in industries such as finance and telecommunications. The U.S. also wants to make it easier to buy stuff online from the U.S., suggesting North American shoppers be allowed to import goods worth $800 duty free.

If this document is a true representation of what Trump wants to achieve, Canada’s negotiators have a fight on their hands.

The U.S. says it wants rules that favour the use of North American goods and services, which could complicate the efforts of Canada and Mexico to work with other countries, especially China and Japan. (“Ensure the rules of origin incentivize the sourcing of goods and materials from the United States and North America.”)

There are hints that the White House is ready to resume old battles, such as United Parcel Service’s annoyance at having to compete with Canada Post’s courier service or Export Development Canada’s assistance to Bombardier and other exporters. (“Specialized sectoral disciplines, including rules to help level the playing field for U.S. delivery services suppliers in the NAFTA countries” and “Require that [state-owned enterprises] not cause harm to another Party through provision of subsidies.”)

And even though supply management wasn’t mentioned specifically, Trump clearly wants to break down the import tariffs that allow Canada’s producers of dairy, poultry and eggs to sell at higher prices. (“Expand competitive market opportunities for U.S. agricultural goods in NAFTA countries, substantially equivalent to the competitive opportunities afforded foreign exports into the U.S. market, by reducing or eliminating remaining tariffs.”)

These are only a few examples. With the possible exception of oil and gas, most of Canada’s core industries risk having their business models upended. There will be losers.

The formal negotiation is on and the U.S. is trying to intimidate its opponents with a long list of demands. Prime Minister Justin Trudeau’s government didn’t flinch. Foreign Affairs Minister Chrystia Freeland dismissed the publication of the U.S. objectives as “part of an internal process” and reminded everyone that Canada buys more goods and services from the U.S. than China, Japan and the United Kingdom combined. Under normal circumstances, that probably would be enough to keep NAFTA intact. But these aren’t normal circumstances. Unlike previous administrations, which were willing to look the other way when smaller economies failed to match U.S. policy, the Trump administration insists on reciprocity. That’s why Canadian dairy farmers, bankers and others from sheltered industries should worry. Nor is it safe to assume the businessman in Trump ultimately will keep economic disruption to a minimum. The Republicans failed to repeal former president Barack Obama’s health-care legislation, a feature promise of Trump’s campaign. The president’s agenda is in disarray. The politician in Trump needs a win. NAFTA could be where he next seeks one.