A paper on Keystone's climate impacts would fail Econ 101

An article published this week in Nature Climate Change (article via Nature paywall) is making the rounds of the headlines because it makes some pretty bold claims—namely that the US State Department under-estimated the emissions impact of the Keystone XL pipeline by up to a factor of four.

The paper’s authors apply a simple model of the world oil market to reach their conclusions, which are driven by the potential for the pipeline to increase global oil supply, thus lowering oil prices and increasing consumption.  If this is true, then the increased consumption induced by the pipeline should be treated as a consequence of the project, and accounted for in a broad analysis of its costs and benefits (of course, so too should the benefits of increased oil consumption at lower prices).

This paper attempts, basically, what those of us who teach or have taught undergraduate economics often try to do—the authors take a simple model of a market, in this case oil, and apply that model using a real world example, in this case, KXL.  What’s important, however, is to get the basics of the example correct. If you miss that, you’ll reach a conclusion or generate a set of numbers, but they won’t really mean much.  It’s also, of course, important to discuss what you miss in building your simple model.  There’s a lot left out of the basic model used in this paper, but I think they also get the basic model wrong.

So, what does this paper do? The basic elements of their analysis are shown below in their Figure 1. They assume that KXL adds 800,000 barrels of new oil to global supply, at any price, and examine the degree to which this additional supply will affect global consumption. 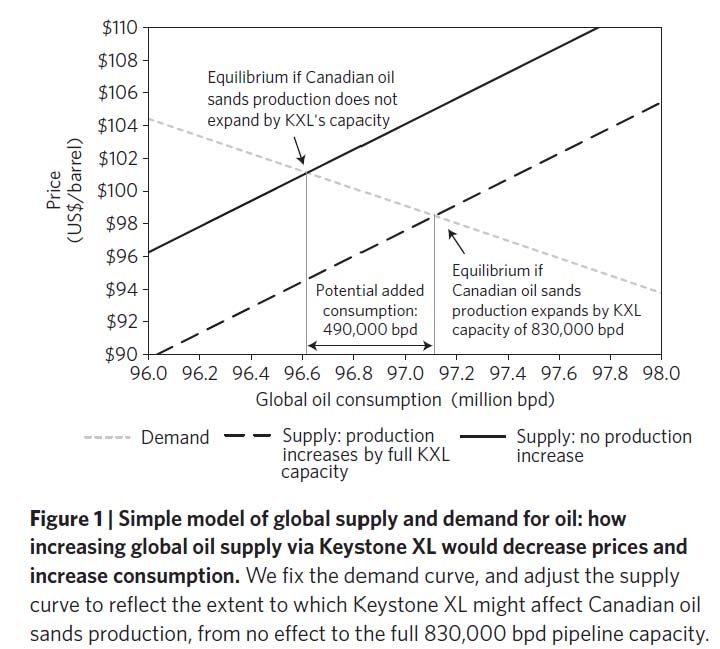 Depending on the slopes (or elasticities) of the demand and supply curves, the impact of adding this additional supply to the market will vary, and it’s through varying these slopes that the authors derive their key table, Table 1, shown below. 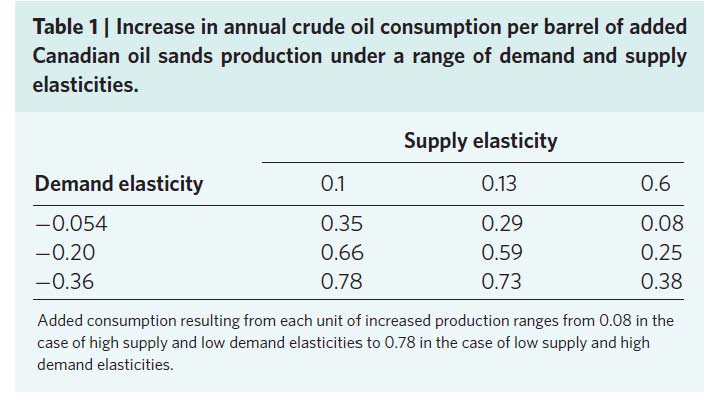 From there, they make two calculations to assess the impact of the new, KXL-carried oil sands production on global emissions.  First, there is the impact of the pipeline on total consumption, and second there is the substitution effect whereby some oil is not produced in other areas due to the KXL-induced increase in production here.  So, using their numbers above, for each barrel shipped on KXL, you’d have somewhere between 0.08 and 0.78 barrels of increase in total consumption, with between 0.22 and 0.92 barrels of oil which would have been produced elsewhere being substituted-for by oil sands production.  The authors argue that it’s the emissions associated with increased consumption of oil which lead to an estimate of the emissions impact of KXL of 100-110 Mt/yr, up to four times the upper limit derived by the State Department.

Here’s the problem with that analysis—KXL isn’t really a level shift in the supply curve, and thus the authors don’t actually make the case for there to be any global price effect associated with the pipeline.  Look back to their figure 1—somehow, by constructing an 800,000 barrel per day pipeline, the cost of at least 2 million barrels per day of oil production has been decreased by $6 per barrel.  That’s one hell of a bargain.

Let’s go back to Economics 101, and see why their analysis is incorrect and what would have been required to do it correctly.  A supply curve is an ordered list of all the oil production opportunities globally, sorted by the cost of extraction or, probably better for this example, the potential free-on-board price at a global trading hub—take every oil play in the world and ask what it would cost delivered to the US Gulf Coast as a starting point.  The construction or not of Keystone XL affects only a small share of this oil and affects it in a particular way—it makes some of this oil more expensive to get to the Gulf Coast.  The relevant question for the world oil market is whether it makes the marginal barrel more expensive to get to market – otherwise it’s just affecting profits inside the margin.

Let me give you a simple example—suppose the marginal barrel of oil globally is, in fact, an oil sands barrel, and so an increase in oil sands supply (i.e. more barrels available at a lower price) would increase world oil production and consumption.  The global supply and demand situation would look something like this, again in an Econ 101 example: 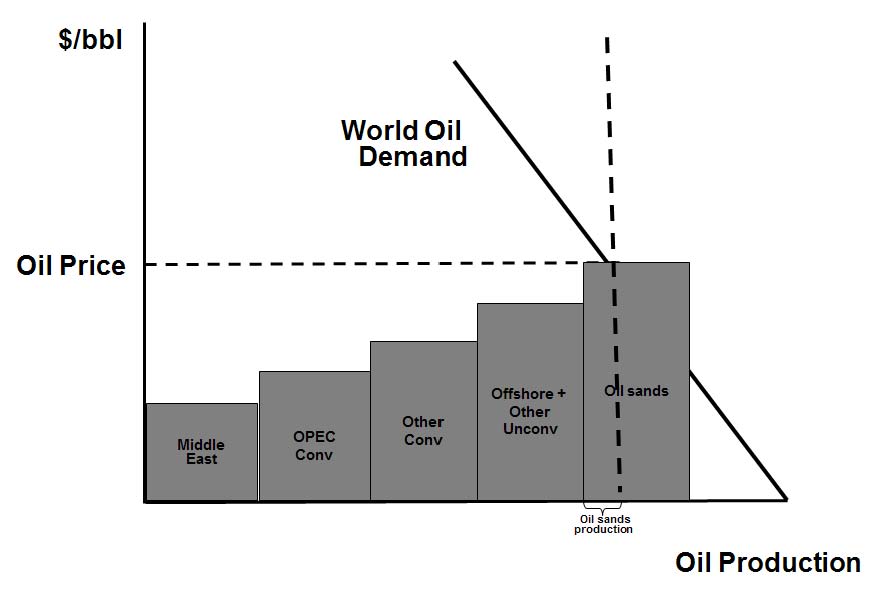 From there, you’ve still got to break down your oil sands supply curve, which means looking at all the potential production, and the costs of getting those barrels to market.  You’d have a separate supply curve for oil sands which would tell you how oil sands production would respond to changes in oil prices and, also, how oil prices might respond to changes in oil sands production.  The impact of Keystone XL vs a case with no pipeline would have the impact of increasing the cost of some of these potential oil sands barrels, but perhaps not of increasing the cost of the marginal oil sands barrel.  If we look at the alternatives proposed today for transporting oil sands, they are all, with the exception of Northern Gateway, more expensive options to get oil sands to market than Keystone XL—that’s why KXL is so attractive.  So, consider a simple example where I have two oil sands routes—pipeline to the Gulf or rail to the Gulf—at costs of $7.50 per barrel and $15 per barrel respectively, and also different types of oil sands production at increasing costs per barrel.  The oil sands supply curve might look something like this: 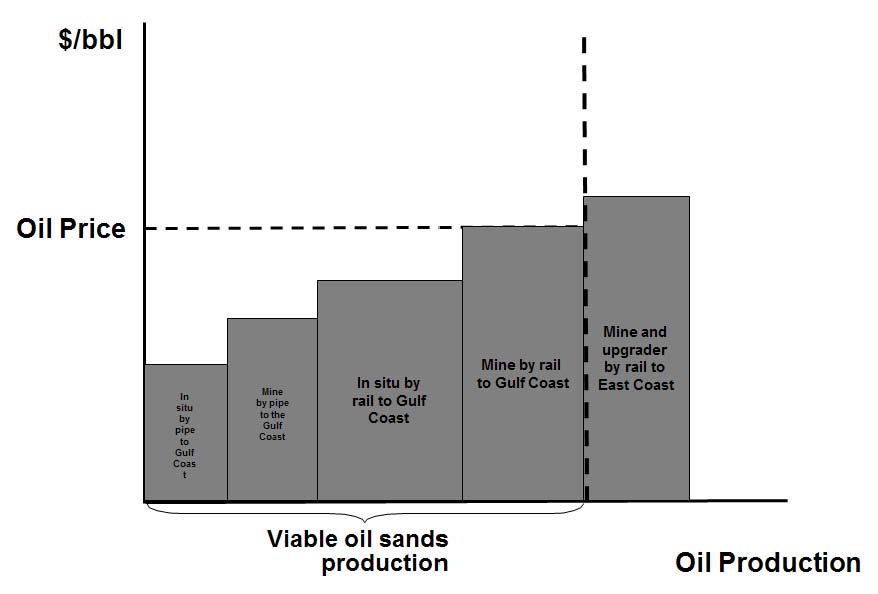 If I take Keystone XL out of the mix, in my toy model, I haven’t impacted the cost of the marginal barrel of oil sands because I haven’t changed the cost of a barrel shipped by rail, I’ve simply reduced the profit on the barrels which would be shipped via KXL by forcing them to be shipped to market in a more expensive way. I’ve shifted a portion of the supply curve, not the whole thing. I’ve increased the potential cost of some oil sands barrels by $7.50/bbl but I haven’t created a case where oil sands barrels which were previously available at any price are no longer available no matter what or a case where all oil sands barrels are necessarily more expensive.

So, is it possible that the State Department under-estimated the impact of oil sands production changes on world oil markets? Perhaps. However, it’s certainly incorrect to assume that the existence of single pipeline impacts all oil sands supply costs, or that not allowing it would render that oil supply unavailable at any price. For this analysis to hold water, you’d have to show that the barrels which would be transported by Keystone XL are, in fact, the marginal future barrels of oil sands production.  With projects like rail terminals, pipelines east and south, and other infrastructure underway to move oil sands, Keystone XL barrels would be far from marginal.

You could also make the argument that, at some point, there is a significant increase in the per barrel cost of transportation and that the cancellation of Keystone XL would shift more barrels onto that more expensive, marginal means.  It’s possible that the potential routes for pipelines, railways, and barge transport for oil are completely exhausted and that without Keystone XL, Alberta would be left to transport oil sands by Volkswagen brigade, but somehow, despite the photographic evidence below, I find that unlikely. I wish Nature Climate Change would have asked for a little higher burden of proof. 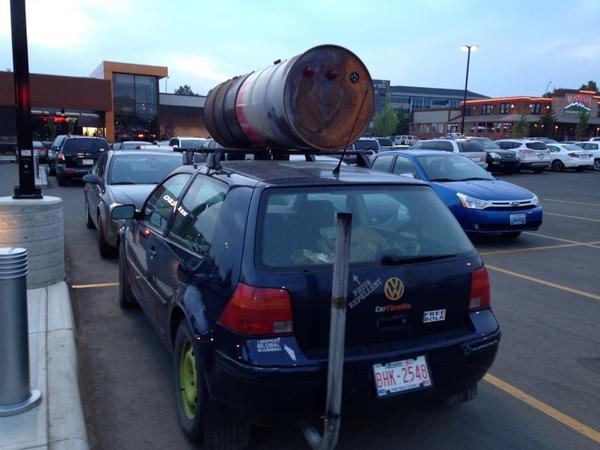