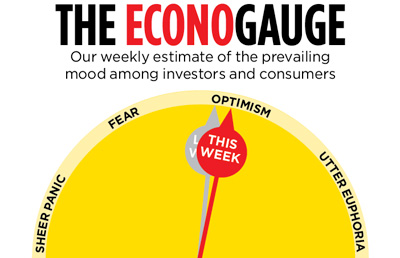 Remember “decoupling”? The idea that turmoil in the U.S. wouldn’t affect the rest of the world? In the history of overused recession-era catchphrases, it came just before “Worst since the Great Depression” and “green shoots,” but after “Don’t worry, everything’s fine, now go back to your shopping.” Yet after the latest data from Canada’s red-hot real estate sector, one might wonder if the idea is alive and well—as in “Have homebuyers decoupled from reality?”
Even as American policy-makers still grapple with who to blame for the massive housing bubble and crash in that country, the debate in Canada is back to how much higher house prices can go. As was widely reported this week, the Canadian Real Estate Association said home resales jumped nearly 42 per cent in October from the year before. Meanwhile, the average national house price climbed 20.7 per cent. That’s the biggest jump since 1989, and it caps one of the meekest housing corrections in Canadian history.

Not surprisingly, the news has left many people flummoxed and hollering “bubble.” Don’t homebuyers know there’s a recession going on outside their new cramped condos? Unemployment continues to rise, and far from improving, the Canadian economy shrank another 0.1 per cent in August. Doug Porter, the chief economist at BMO Capital Markets, perhaps captured the contradiction best when he noted the only other segment of the economy to thrive as well as housing over the last six months has been bankruptcy lawyers.

Yet homebuyers are only doing what should be expected. Mortgage rates are at record lows, thanks largely to the decision by the Bank of Canada to slash its key lending rate to 0.25 per cent and hold it there until the second half of next year. Some lenders are offering variable-rate mortgages for as low as 2.55 per cent, with the average five-year closed mortgage rate offered at 5.4 per cent.

The dangers are obvious. Once rates rise, even slightly, homeowners could see their monthly payments skyrocket when it comes time to refinance. Bank of Canada governor Mark Carney knows this. He’s already warned homebuyers not to take on more mortgage debt than they can afford. Yet by keeping rates so low, that’s exactly what the central bank is encouraging Canadians to do.

So don’t be surprised if the bank breaks its commitment to keep rates low well ahead of schedule. It may be the only way to recouple the housing market with reality.

Trading up
Despite fears about the soaring loonie, Canada posted a 3.5 per cent rise in exports in September, the third time in four months there has been an increase. Statistics Canada said gains in automotive, machinery and industrial goods were partially offset by weak energy exports.

Off the dole
The number of Americans filing for unemployment benefits fell by 12,000 during the first week of November, the lowest level since early January. The figures from the U.S. Labor Department have raised hopes that the tide of job losses may finally be turning.

Trucking along
Canadians aren’t shying away from big ticket purchases such as cars and trucks. Statistics Canada said sales of new vehicles rose 1.2 per cent in September. That’s still less than last year, but nevertheless continues a positive trend under way since early January.

New bonds
The wave of U.S. corporate bankruptcies may have finally peaked as companies are increasingly successful in refinancing debt. Some US$123 billion in new bonds have been issued this year by firms with junk status, more than double what was issued last year.

Growing trade gap
The U.S. trade deficit grew to its widest point since January. Exports rose by US$3.7 billion in September, but demand for imported goods such as oil and automobiles increased as well. That’s unlike Canada, where exports grew but import levels remained essentially flat, and threatens to slow down any U.S. economic recovery.

Output down
U.S. industrial production, including output from mines, factories and utilities, rose by just 0.1 per cent in October, which was less than had been forecast. The Federal Reserve said manufacturing production fell for the first time in four months. Meanwhile, the automotive sector, which had been bolstered earlier this year by the cash-for-clunkers program, posted a decline in October following its biggest three-month surge since the 1970s.

Savings slump
The number of Canadians who managed to sock away retirement savings last year dropped 1.8 per cent, according to Statistics Canada. In fact, only two provinces—Saskatchewan and Newfoundland and Labrador—recorded gains in the number of people who made contributions to registered retirement savings plans. While New Brunswick also posted a decline in the number of people who saved, there was some positive news. Those who did contribute put in nearly 11 per cent more than a year earlier.

Graph of the week

Easy come, easy go • In the lead-up to the economic meltdown, credit card companies papered the United States with mailings offering cards to just about anyone who’d sign up. Since the credit bubble burst,  those offers have become a rare sight in American mailboxes. 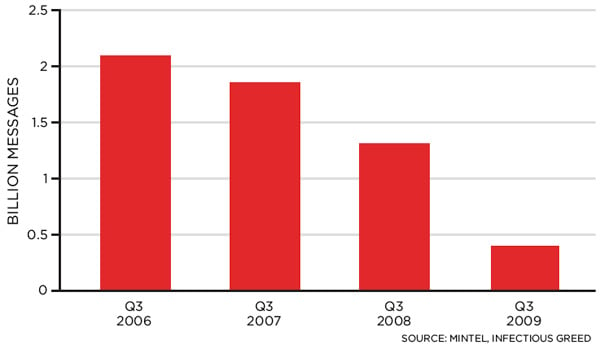 SIGNS OF THE TIMES

World leaders at the APEC summit in Singapore highlighted the importance of trade, particularly with China, in fuelling the global economic recovery. But greasing the wheels may be easier said than done as China called on the U.S. to abandon protectionist measures and Washington pressed Beijing to relax its currency policies.

“A lot of people are concerned about a wider [U.S.-China] trade war.”—Jiang Zhaokang, Beijing-based trade lawyer

“Our two countries need to oppose and reject protectionism in all its manifestations.”—Hu Jintao, president of China

“While Canada’s economy was built through trans-Atlantic trade, our future prosperity will increasingly depend on our ties to the Pacific.”—Prime Minister Stephen Harper

“The challenge Obama is facing is that the influence of the U.S. is rapidly waning and that he has little credibility.”
—Marc Faber, fund manager, Marc Faber Ltd.

“China’s got big issues of its own and certainly doesn’t want to move on the currency, and it’s concerned

about some protectionist rumblings from the United States.”—Stephen Roach, Asia chairman, Morgan Stanley

“Economies around the world are beginning to grow again. But we cannot return to the same cycles of boom and bust.”—U.S. President Barack Obama

THURSDAY, NOVEMBER 19: Statistics Canada will report wholesale trade figures for Septembe r. A rise of 1.2 per cent is expected.
MONDAY, NOVEMBER 23: U.S. existing home sales for October will be released, with annualized sales expected to hit 5.65 million.
TUESDAY, NOVEMBER 24: Will America’s GDP expand again in October? Economists forecast an increase of 3.3 per cent, a vast improvement from the 0.74 per cent drop last year.