Explaining Canada's hurry to build pipelines in the U.S.

Andrew Leach on why the status quo is hurting Canada

Washington’s decision to temporarily shelve the Keystone XL project has Canadian companies rushing to redraw the pipeline map. Enbridge announced plans to reverse the direction in which crude oil flows in the Seaway pipeline connecting Oklahoma to Texas in order to send more oil from Midwestern refineries to those on the U.S. Gulf Coast. Keystone godfather TransCanada, on the other hand, wants to start building the southern leg of the pipeline, also linking Oklahoma to Texas. Both projects aim to reduce the pressure on a bottleneck of crude in the U.S. Midwest that’s been building up for a year. Why are Canada’s majors so eager to build pipelines to the Gulf? Andrew Leach, a professor of natural resources, energy, and environment at the University of Alberta’s Alberta School of Business, explains.

Why is there a buildup of crude oil, including Canadian crude, at refineries in the U.S. Midwest?

It’s a simple case of supply and demand in a local market. We’re often told the market for oil is global, but in truth it’s more of an integrated web of regional markets and the U.S. Midwest is one of those regions (in the graphs, you’ll see it referred to as PADD 2). This regional market has pipelines running both in and out of it, and oil is used by refineries within the region to produce gasoline, diesel fuel and other products. There are essentially two ways in which crude oil gets out of the Midwest–either it’s refined or it’s transported to another region by pipeline, rail, barge, or truck. On the demand side, use of crude oil by Midwest refineries has been decreasing since the year 2000, as shown in the figure below:

Normally, it’s possible to take care of excess imports into one region by moving excess supply to another region, and that has been happening in this case too, but just not quickly enough. You can see in the graph below the jump up in movements of crude oil from the Midwest to the Gulf Coast, increasing over fourfold since 2005:

Even with the added shipments out of the Midwest, a glut of oil remains, and the excess supply has pushed down prices. In the last year, the spread between what a barrel of oil is worth in the Midwest (called WTI–which is usually the oil price you see on the nightly news) and what it’s worth either on the Gulf Coast (LLS) or when shipped to Europe (called Brent–which is generally used as a benchmark for world prices) has widened to historic levels. 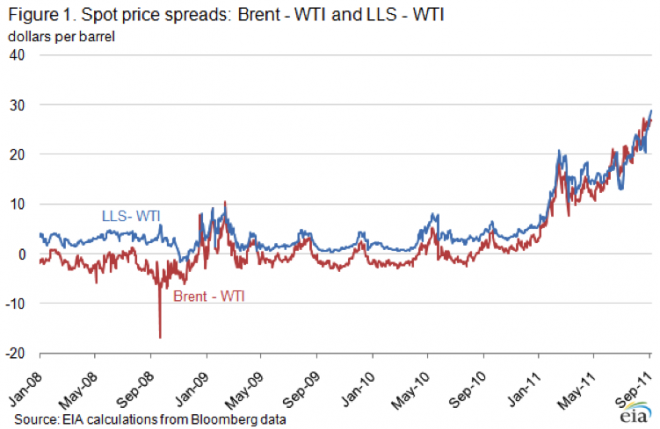 How would unclogging the bottleneck affect prices and profits for Canadian oil producers?

This price spread has been hurting Canada in two ways. On the production side, since most of the export capacity leaving Alberta goes to the Midwest, our producers have been receiving significantly less value for their oil than they would if that oil were shipped to the Gulf Coast, or to any other port where it would sell at world prices. With Canadian oil exports to the Midwest at over 1.6 million barrels per day, a discount of $25 per barrel translates into about $15 billion per year of lost value to producers. And because these lower revenues mean lower royalty payments and income taxes, these costs are felt by all Canadians and in particular Albertans.

In addition, since Eastern Canada continues to import oil, and since they are importing oil principally from overseas and not from the Midwest, they are paying premium price for oil. In fact, at times during the summer and fall this year, when the price spread was at its widest, Canada was effectively facing a financial trade deficit for oil—the value of the oil we exported was lower than the value of oil we imported—even though we were a net exporter of oil in terms of barrels. So, Canadians are both paying higher gas prices as a result of higher world oil prices and getting less for their oil production as a result of the depressed regional oil prices in the Midwest.

Either increased shipping capacity out of the Midwest or alternative markets for Canadian production would increase oil production profits for producers and the royalty and tax inflow for federal and provincial governments. However, since Canada’s population is concentrated in markets that already fetch their oil at higher world prices, even if western Canadian producers were to access better prices for their products, that would be unlikely to have a meaningful effect on gasoline prices or other segments of our economy.

Are Enbridge and TransCanada really in a race to get the oil from the Midwest to the Gulf, or is there a need for both pipeline routes?

Pipeline companies are generally in the business of moving products from where there is an over-supply to where there is an under-supply. Right now, the price spread makes it clear there is a need for more capacity from the Midwest to the Gulf. If you look at production forecasts for oilseeds—where exports could exceed 3.5 million barrels per day by 2020—as well as U.S. production in the Bakken—watch this animation to get a feel for how fast that’s growing—then there’s definitely a market for significant new pipeline capacity.

Enbridge has two projects in play now. First, it announced last week the purchase, reversal and proposed expansion of the Seaway pipeline, which will eventually move 400,000 barrels per day of oil from the Midwest to the Gulf Coast. Second, it has proposed the Flannagan South pipeline project, which will take another 400,000-500,000 barrels per day from the Chicago area south to the Gulf, with part of this project likely to involve a twinned pipeline on the Seaway route. These two projects alone are unlikely to be sufficient to completely eliminate the glut of oil in the Midwest, so there is likely still room for TransCanada’s Keystone Phase 3 (the southern part of the XL pipeline) from Cushing, Oklahoma to Houston and Port Arthur, Texas.

Was the Keystone XL expected to eliminate this Midwestern buildup?

Yes, the commercial case for the Keystone XL project was entirely based on this Midwestern buildup and future production growth in the Bakken and Canadian oilsands. If you look at the Keystone project map, you will see that the pipeline will pick up production from those two regions, largely bypass the Midwestern region, and deliver oil to the Gulf Coast. Currently, the Gulf region imports over 5.5 million barrels per day of crude oil and related products at world prices. In other words, without the Keystone XL system, shippers are selling into depressed Midwestern markets or paying extra costs for transport by rail. Thus, the Keystone XL pipeline offered a win-win for producers and refiners, notwithstanding the environmental issues along its route.

As shown in the figure above, over three million barrels per day of imports to the Gulf Coast come from OPEC countries, many of which have frosty relations with the U.S. The commercial case for the Keystone XL project, which would allow Gulf Coast refiners to access oil from lower-priced, landlocked markets such as Alberta, therefore, would potentially allow the U.S. to reduce their dependence on foreign oil–albeit by a small amount.

Andrew Leach is an associate professor at the University of Alberta’s Alberta School of Business. He blogs regularly at: http://andrewleach.ca/. You can follow him on Twitter at: @andrew_leach