How to get ahead in think-tanking

Do labour shortages exist in Canada? The question came up in a high-profile report from the Fraser Institute. Despite the attention, the paper brings us no closer to an answer, largely because it fails to understand the question. But its author, Philip Cross, seems quite certain a shortage exists and that the kids are to blame.

In order to determine if labour shortages exist in Canada, we must first decide what constitutes a labour shortage. Unfortunately, Cross does not define the term. In precise economic terms, “shortage” applies specifically to “[a] condition in the market in which the quantity demanded is greater than the quantity supplied at the existing price.” For the sake of clarity, check out my sketch of what a shortage would look like in the traditional Economics 101 framework: 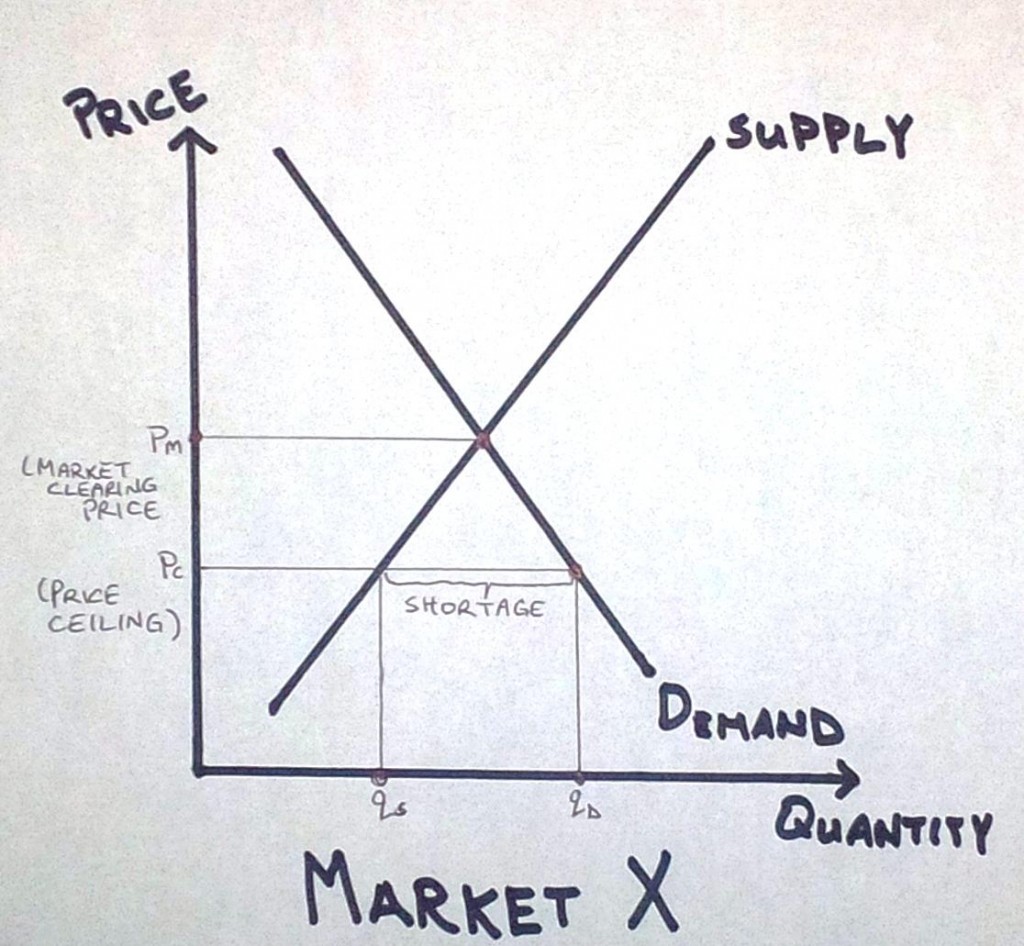 In such a framework, the economist would need to be rather explicit about how she defines “market” (fast-food workers in Lake Wobegon, for example), “quantity” (that is, number of workers, total hours worked, and so on) and “price” (hourly wage, yearly salary, yearly salary plus benefits, etc.).

In this framework, a shortage exists when the existing price is below the price needed to match the quantity demanded with the quantity supplied. There must be some mechanism preventing prices from adjusting to eliminate the shortage, with the two most common ones being government regulation (rent controls are a classic example) or some form of market failure.

It’s difficult to tell what Cross means by “shortage.” On page 3 of the paper, he does examine the role wages (prices) play in labour shortages:

The final puzzle is why wage increases have not accelerated as incipient shortages threaten. Part of the answer is the weight of central Canada’s weak labour markets in the national statistics, which hide a clear acceleration of wages in some provinces and industries. As well, employers face a dilemma: If they boost wages to attract new workers, they will have to raise wages for their incumbent labour force.

The first part of the answer roughly states that markets are working, shortages are being reduced, if not eliminated, but this is masked somewhat by national data. If true, why worry about labour shortages?

The second part is more interesting. Cross believes firms are unable to offer potential hires enough money, as this would force employers to raise wages for existing workers, thus preventing the labour shortage from closing. Unfortunately, the paper does not provide any evidence that this is responsible for labour shortages. It does suggest these shortages may linger, as “these employment outcomes have not persisted long enough to change earnings.”

I was surprised to see references to slowly adjusting labour markets in a Fraser Institute paper. The concept Cross discusses of  “sticky wages” underlies most of New Keynesian economics. Naturally, the paper does not go on to suggest standard New Keynesian policy responses to the problem, but at least acknowledging the issue is a level of ideological diversity that is unexpected from the institute.

Not only does the paper not provide any New Keynesian remedies, it does not provide any suggestions at all that could be used to rectify this market failure. However, I am basing my interpretation of the problem on my best guess as to what Cross means by “labour shortage,” a concept he never explicitly defines. Of course, Cross is welcome to define the term however he likes in his paper, but if he is defining “shortage” some other way, he should inform the reader.

Cross describes how wages are going up in parts of the country, with nominal average hourly earnings rising nearly twice as fast in Newfoundland, Saskatchewan and Alberta as in Canada. The report believes this is indicative of something, though I’m not sure what:

The growing gap between wages in Newfoundland, Saskatchewan, and Alberta and the rest of the country reflects how efforts to increase the supply of labour in these provinces have not been sufficient to stem the rising pressure on wages, a classic symptom of how the labour market signals shortages.

A simple explanation for the wage increases is that the demand for labour in some regions has increased, pushing up rates (as well as the quantity supplied of labour), which is the sign of a well-functioning market, not of shortages. Unless we have a pool of idle workers at home, the price of labour—like the price of anything—should rise when demand increases. If the definition of “shortage” is simply rising prices, then our economy is rife with shortages. I’m not ready to declare a fruit shortage every time the price of oranges goes up a penny, though.

Cross provides data that shows some Alberta companies are dealing with the increased demand for labour by having existing employees work more hours, though no context is given that would suggest this is materially different than previous economic booms. But there are problems with this approach:

Squeezing more hours out of workers is a short-term fix to labour shortages for some employers. However, they are likely to view it as an unsustainable solution, especially the very long hours worked by people over 55 years old and multiple job holders working more than 50 hours a week.

If this approach is unsustainable, then might it not sort itself out? Won’t employers have to hire younger workers to replace them? Not necessarily, argues the report, because too many young people are going to university rather than community college:

The reason why youths are reluctant to pursue their studies at community colleges instead of universities is unclear. It could reflect that they are receiving poor information about labour market outcomes. They could also be making poor decisions, because they are influenced by the mantra in our society that a university education is the ticket to better jobs and incomes.

Cross provides thin evidence to support his thesis that students are enrolling in the wrong programs. First, there is data on employment rates (the percentage of people with a job):

The employment rate for youths who graduate from high school and then acquire a certificate or diploma is 77.2 per cent, versus 71.8 per cent for university graduates.

This may be meaningful, but, without any controls, it is impossible to tell. Men have significantly higher employment rates than do women for a variety of reasons. If women make up a higher percentage of university graduates, then this fails to be an apples-to-apples comparison. What ultimately matters is how the decision to go to college versus university affects the employment opportunities. Choosing to go to university over college will change many things for a 19-year-old male, but gender is not likely to be one of them!

Unemployment-rate data is also cited, with the youth unemployment rate for 15- to 24-year-olds cited for various groups: post-secondary certificate or diploma and high school (7.8 per cent), bachelor’s degree (nine per cent) and above a bachelor’s degree (9.4 per cent). But this is not an apples-to-apples comparison, since a bachelor’s degree often takes longer to obtain, making the graduates skew older. A 23-year-old with a certificate may have had two or three years to either find a job or drop out of the labour market (and, thus, not be counted as unemployed), whereas someone with a bachelor’s degree has likely just graduated and is looking for his first job. If we instead consider those 24 or older, we find those with B.A.s have the lowest levels of unemployment.

If demand for post-secondary certificate/diploma holders was rising significantly, we should expect to see their wages rise while wages in the over-saturated bachelor’s market fall. But, as Cross notes, “the relatively higher earnings for university graduates has not eroded significantly.”

In his conclusion, Cross declares that “Canada does not suffer from the need ‘to collect more and better data’ to answer some of the questions related to whether shortages exist.” It’s true, if we’re content to answer vague and ill-defined questions by making apples-to-oranges comparisons using raw data with no controls. Then, what we have is more than sufficient.