First, the details of the policy proposal. According to the 2011 Conservative Party of Canada election platform, the Conservatives propose to allow up to $50,000 to be transferred from one spouse to another for families with children under age 18. The reason this is potentially beneficial is that income in different tax brackets faces different tax rates. For couples that have the same income, swapping income back and forth brings no benefits since that income faces the same rates either way. On the other hand, when one spouse is in a high tax bracket and the other is in a low tax bracket, the tax savings can be substantial.

Is it unfair for couples with the same total income to face different tax burdens? Alexandre Laurin and Jonathan Rhys Kesselman address the fairness issue here, in work put out by the C.D. Howe Institute in 2011. One of their main concerns is that a couple with a stay-at-home spouse benefits tremendously from the untaxed ‘home production’ of that spouse, and this should be taken into consideration when comparing across two-income and one-income couples.

This is easier to understand if you imagine a couple with two earners both making $50,000 compared to a couple with one earner taking home $100,000. In my experience, the two-earner couple has a much more stressed and difficult lifestyle because of the need to co-ordinate childcare, shopping, meal-preparation, laundry, and other daily household tasks. The single-earner couple, on the other hand, has a full-time household manager taking on those necessary and demanding daily tasks. That makes life easier for the single-earner couple, and the basic comparison across the two couples with the same total income less straightforward.

On the other hand, Jack Mintz makes the case for the unfairness of differing tax treatment for couples with the same total income here. Mintz expands on his thoughts with a few new twists here, in work with Matt Krzepkowski. They propose to change the way couples can share tax credits in order to partially compensate for the extra economic value received by households with stay at home spouses. (Krzepkowski has more details and simulations in the Canadian Tax Journal here.) As I understand it, their proposal wouldn’t fully account for the differences in home production, but would take steps in that direction.

The other large concern about income splitting is the distribution of the benefits–who gets what. The recent report from the Canadian Centre for Policy Alternatives looks closely at this concern. (Also, a somewhat cheeky presentation of the same point by the Broadbent Institute on ‘Mad Men Giveaway.’)

Below is a chart of my own analysis of this question. Along the front axis of the chart is the income of the primary earner, and the back-and-front axis shows the income of the secondary earner. The height of the bars shows the estimated federal tax savings. These savings are very high for some couples. For example, a couple with a $200,000 earning spouse and a $0 earning other spouse would save $6,489 under the 2012 tax rates. In contract, a couple with a $50,000 earning main spouse and a $25,000 earning spouse would save only $511. It seems clear that the distributional concerns raised by the CCPA and others about the 2011 Conservative proposal are based in fact. 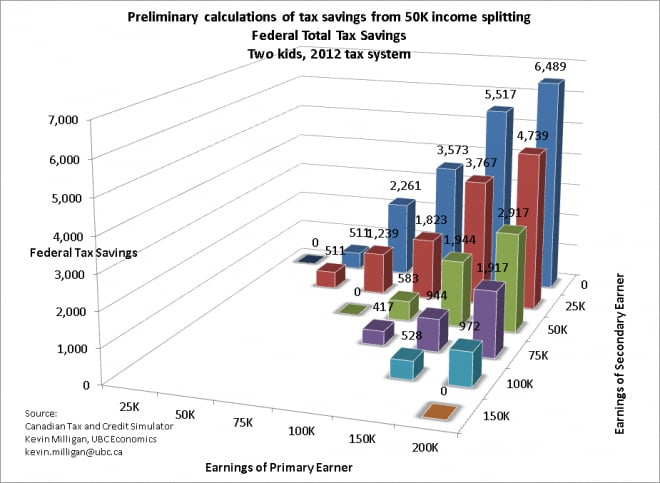 There are many other concerns raised about income splitting which I can’t address in one blog post. These range from the impact on the work incentives of second earners, to changes in the balance of negotiating power within households (see Elisabeth Gugl), to problems generated by taxing people for income earned by others (see Lisa Phillips or Frances Woolley). For more background, Frances Woolley has a blog post on the history of income splitting proposals.

At this point in the debate, here’s how I take stock of the arguments. There are serious points on each side of the ‘fairness’ case for different treatment of one-earner and two-earner couples with the same total income. Proposals like the Krzepkowski-Mintz “tax credit sharing” idea deserve some consideration and further analysis to see how well such adjustments could close the gap between the two sides of the debate. However, even if the case for ‘unfairness’ can be made, a larger issue is one of priorities. In 2015 if there is $2.5 billion available in some kind of “unfairness-fighting envelope,” how should this particular tax-splitting proposal rank relative to the other injustices in our society that could be remedied through the tax system? Moreover, if your actual goal is to help families with young children, existing tools like the Canada Child Tax Benefit might give a more equitable distribution of the benefits. The Finance Minister’s wish for more analysis sounds like a good call to me.