Joseph Stiglitz on why this stock market upheaval is so dangerous 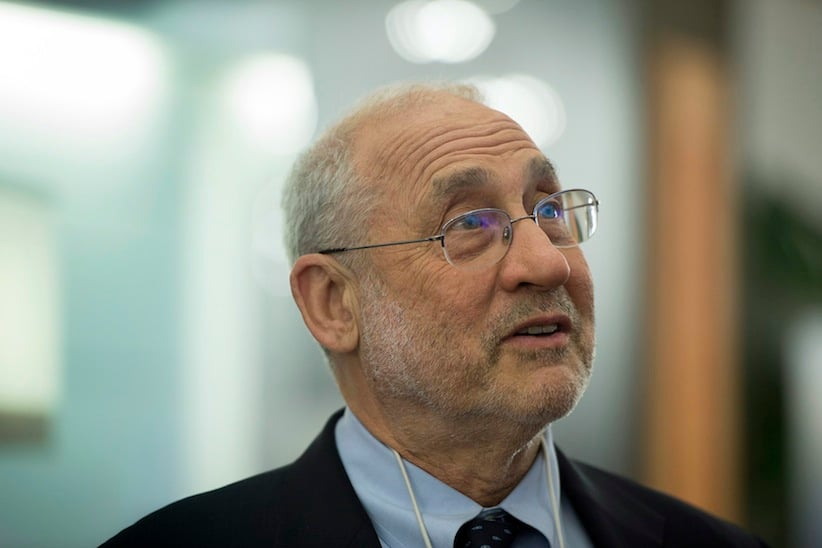 The wild swings in stock markets over the last week have raised concerns about another global downturn. Is the U.S. economy resilient enough to withstand the market uncertainty? Does America’s central bank have any tools left to deal with a downturn should things worsen? In the eyes of Joseph Stiglitz, the Nobel Prize-winning economist at Columbia University, the difficulties facing the U.S. now have their roots in the bad decisions officials made in the wake of the 2008 financial crisis. In a preview of an interview with Stiglitz set to be published in the next issue of Maclean’s, the economist discusses why he’s concerned by the spreading panic.

Q: We’d started to see some signs of recovery in the U.S. economy. Does this stock market turmoil pose a threat to that?

A: First I’d say it’s not a strong recovery. The crisis was 2008, we’re now in 2015—eight years later after the recession and the gap between where we would have been and where we are is huge and not closing. That in some ways was expected, in that the defective response to the crisis lowered potential U.S. economic growth by leaving all these people unemployed. The implied unemployment rate is still very high. Labour force participation is very low, at something like a quarter century low. Not so much because of the aging population, but because of discouraged workers. And the increase in the wages in the second quarter was the lowest performance in 25 years. So overall, before this last turmoil, the U.S. economy was in better shape that Europe or Canada, but not strong. This turmoil will almost surely make things worse.

A: The median family income in the U.S. is lower than it was a quarter century ago, and if people don’t have income, they can’t [consume], and you can’t have a strong economy. We had assumed it was the emerging markets that would keep the global economy going. With Europe weak, with our household income weak, it would be China and emerging markets. And what’s clear is that’s not true. There’s significant risk—actually it’s, no longer risk—a significant likelihood of a marked slowdown not only China, but also in a lot of other countries—Brazil, which is in recession, all of the other countries that depend on commodities, including Canada, are facing difficulties. So it’s hard to see a story of a strong U.S. economy.

Q: You’ve said the booming stock market of the last few years was a symptom of America’s weak economy, not a sign that the economy was recovering. What did you mean by that?

A: The stock market had done well for basically two to three key reasons—low wages, so when wages are low profits are high; low interest rates, but the low rates are because the economy is sick; and the third was through much of this period the dollar was weak, and when the dollar is weak and our multinationals make profits abroad, when that money gets converted back into dollars it looks very strong. Now that the dollar is strong, it’s having just the opposite effect.

A lot of the skittishness now is people realizing the fundamentals weren’t that strong; interest rates may be going up faster than the fundamentals might justify because of the deserved concern that quantitative easing and low interest rates lead to asset price bubbles including the stock market. And that’s the agony the Fed [the U.S. Federal Reserve] is going through. The economy is not in a robust state, with no signs of inflation, so for all of the talk about the increase in the interest rate, it might not happen.

Q: How does America get out of this mess—keeping rates low to support the real economy may spark asset bubbles and speculation in stocks, which then brings the need to increase rates even if the real economy hasn’t improved?

A: My view goes back to what we should have done, which was we needed more fiscal stimulus. We shouldn’t have relied as much as we did on monetary policy. But given the politics in America, that wasn’t going to happen, and the Fed took what you might call the second-best approach. It still had a responsibility to stimulate the economy, and was trying to balance those various risks.

Because we put all the burden on monetary policy, it doesn’t have much room to maneuver now. It can decide not to tighten, but it can’t loosen. So its ability to respond is very asymmetric. The most that it can do is to postpone the actions it was going to take.

So as an economist I can answer your question very easily—there’s what we should do—but politics in the United States doesn’t make it very likely.

Q: And what it should do, you’ve argued, is use fiscal policy to stimulate the economy.

A: Some of that is happening at the state and local level, because they have balanced budget frameworks and with the recovery their revenues are increasing and therefore they are spending. So that side is supported. But the Republicans in Congress are still very strong about holding back government spending, and that’s going to be a dampener.

Read our full long Q&A with Stiglitz in the next issue of Maclean’s.