Making sense of the legal fight over Alberta's power agreements

What's at stake as the Alberta government goes to court over buying agreements tied to coal-fired power plants? 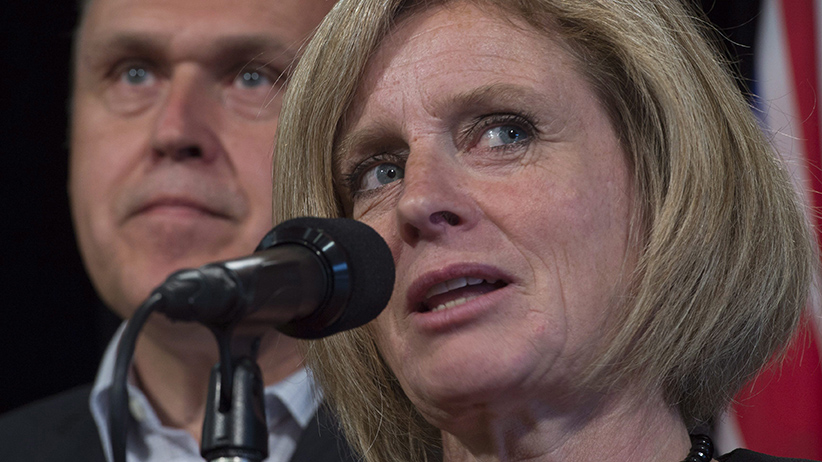 The Government of Alberta recently launched a legal case that may “be one of the more complex and high profile judicial review proceedings ever heard in the province.” The government is challenging the legality of a clause which allowed the owners of Power Purchase Arrangements (PPAs) to return them without penalty—which the government has styled the “Enron Clause”. They suggest the return of these PPAs could add up to $2 billion to Albertans’ electricity bills over the coming four years. The companies involved, meanwhile, contend that changes in government policy allow them to take these actions, that the government estimate of the potential costs are exaggerated, and that more consultation and better policy design could have prevented this outcome. (For recent coverage of the case, see this, this, or this.)

In new analysis published today by the University of Calgary’s School of Public Policy, we discuss in detail the circumstances which led us to where we are today. Here, we’ll provide a brief summary of the key takeaways.

But first, some background. Alberta’s electricity system is unique in Canada. Unlike other provinces, there is no provincially-owned power company and, since 1996, power generation has been a competitive market. As the system evolved toward a competitive market, the government looked to mitigate market power and honour promises of certain rates of return made to plants built under the previous system. To accomplish this, the government created and auctioned off PPAs. The holders of these PPAs were granted the right to sell power from certain power plants, earning what they can from the sale of this power, and in turn had an obligation to pay the power plant owner contractual amounts which would ensure that the plant owners continued to receive their pre-deregulation rate of return.

So what happened that lead to the terminations? In our analysis, we find that the combined impacts of falling prices and rising costs have made the PPAs tied to coal-fired power plants in Alberta unprofitable. The increased costs are due to more emissions-intensive coal power plants facing higher costs under carbon pricing policies initiated under the former PC government in 2007 and strengthened under the new NDP government.

The policy changes occurred in two parts. First, in June, 2015, the Government announced amendments to the existing Specified Gas Emitters Regulation which would roughly triple the costs of greenhouse gas emissions from coal-fired power plants by 2017—from about $2 per MWh to $6.50. Second, the recommendations of the Climate Leadership Panel, tabled in November 2015 and expected to be adopted by the government in legislation this year, would bring these costs to more than $20 per MWh. Importantly, the Carbon Competitiveness Regulation—as the new, NDP policy is called—didn’t increase the price charged on carbon emissions but instead significantly reduces the number of free emissions credits received by coal fired power plants by providing all power producers with the same allocation per unit of electricity produced. As coal plants are much more emissions intensive than, say, natural gas, their costs disproportionately increase. (Importantly, this is a feature of the Carbon Competitiveness Regulation, not a bug.)

To illustrate the magnitude of these cost increases, we plot below our estimates of power production costs under the two policy changes. (We use costs as estimated by the Balancing Pool in a document obtained through a freedom of information request by the opposition Wildrose Party, then adjust those using changes in policy-related carbon costs.) 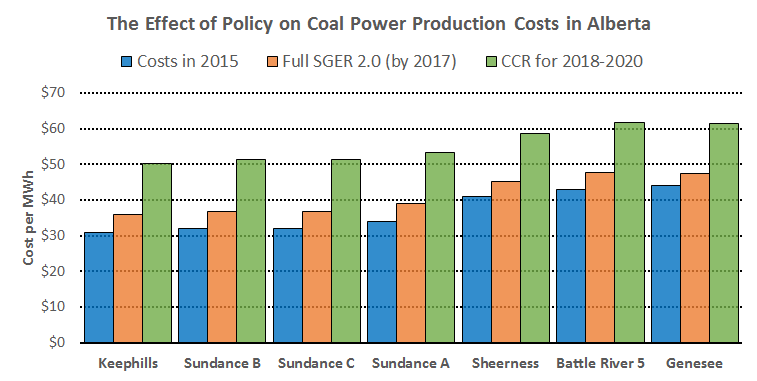 With costs of coal power rising to $50-60 per MWh, prices need to be correspondingly higher to keep the PPAs above water. But they aren’t. Power prices are lower than they have been historically and, contrary to what you’ve likely read in many fire-alarm-pulling op-eds, the market is not expecting a significant increase in power prices in response to the changes in emissions policy. This is, at least in part, because the CCR rules, while disadvantaging coal power, provide an advantage to cleaner power generation from gas which will see costs decrease.

The figure below shows that, since September 2015, the expectation of future power prices over the remaining term of these arrangements has fallen—substantially. (The September price forecast in the Balancing Pool document referenced earlier. We update their forecast using current market prices from here.) 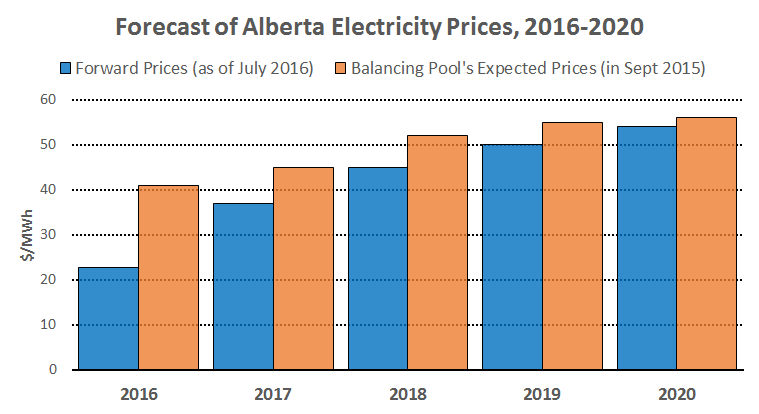 Further, as shown below, coal power produced by PPA units was worth, on average, nearly $49 per MWh based on spot market pricing in 2014, thus far in 2016 the average value has been less than one third of 2014 values, at less than $16 per MWh. (For this, we use data from NRGStream and the Alberta Electricity System Operator.) 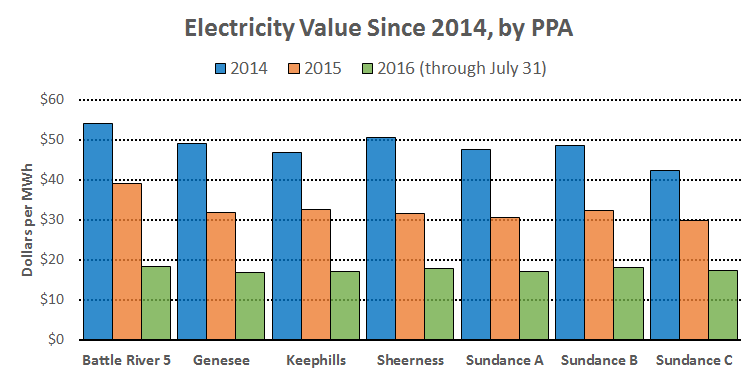 Combined, as shown in the Figure below, the effects of the electricity price drop and the increased costs of GHG emissions policies have, according to our analysis, rendered the PPAs unprofitable while neither the price changes nor the climate policy changes would have done so independently. 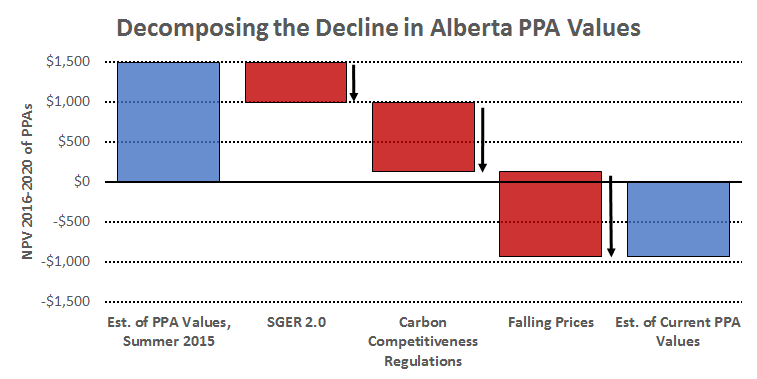 Instead of bearing those losses, the PPA holders have exercised an option to terminate their arrangements without penalty, which leaves an entity known as the “Balancing Pool” potentially on the hook. The Balancing Pool, in turn, will pass these losses on to Albertans through charges on power bills.

The government and many others take the view that this return of the PPAs is intrinsically unfair—they see those who have earned significant returns shifting expected future losses onto the electricity bills of Albertans. We find that the truth is perhaps not so straightforward. First, the termination provision in the PPAs provided a valuable option and, since the PPAs were originally auctioned off, the government should have captured the value created by the termination option. Indeed, the government collected roughly $3 billion from the PPA auctions, and would almost certainly have collected less if there was no termination provision.

Second, as the University of Calgary’s Nigel Bankes describes it, “the overall intent of (the termination provision in Section 4.3 of the PPAs) is to hold the owner harmless from the consequences of any change of law,” and to some degree, it does so quite well. Though perhaps too well. A ruling by the Alberta Energy and Utilities Board, interprets the clause broadly to provide for the costless return of the PPAs to the Balancing Pool if, “a Change of Law rendered a PPA unprofitable or more unprofitable.” This change in law clause effectively provides near-complete protection for the owners not only from losses resulting from a change in law but from any economic losses as long as there has been a change in law affecting their costs at some point. Importantly, this would include the initial introduction of SGER by the former PC government in 2007.

How big are the losses that, depending on the outcome of the court case, Alberta rate-payers will be on the hook for? The government suggests they could be as high as $2 billion. Our analysis points to a smaller number, with the total value of PPAs now at roughly negative $900 million. But, the Balancing Pool already owned one of the PPAs (Genesee), so the new losses for Albertans are more like $600 million.

Importantly for Albertans, these losses only occur if prices stay low. For perspective, the aggregate losses we forecast are such that the typical residential household will see their electricity bill rise by roughly $2.25 per month. However, households will benefit far more from lower prices than they will lose from the return of the PPAs. So far in 2016, for example, the energy charge for a typical household has been $10 per month lower for the typical residential household than in 2015, and $24.50 per month below 2014 levels.

In other words, this is not a case of power prices going up both because of the change in carbon policy and as a result of the turnback of the PPAs. Quite the opposite. It’s consumers bearing costs related to the turnback of PPAs because prices are not going up as a result of the carbon charge. The return of the PPAs reflects the fact that Enmax, Capital Power, TransCanada and others looked at the future of the electricity market and concluded that prices were unlikely to rise enough to make these contracts profitable once coal power plants were treated in the same way by carbon policy as other electricity producers. If the losses are such that a charge does appear on Albertans’ bills where there used to be a Balancing Pool credit, it will be because Albertans continue to pay electricity rates lower than they’ve seen in decades.

With tensions high on all sides of this high-stakes debate, a little data and evidence can go a long way. We hope our analysis can provide just that.