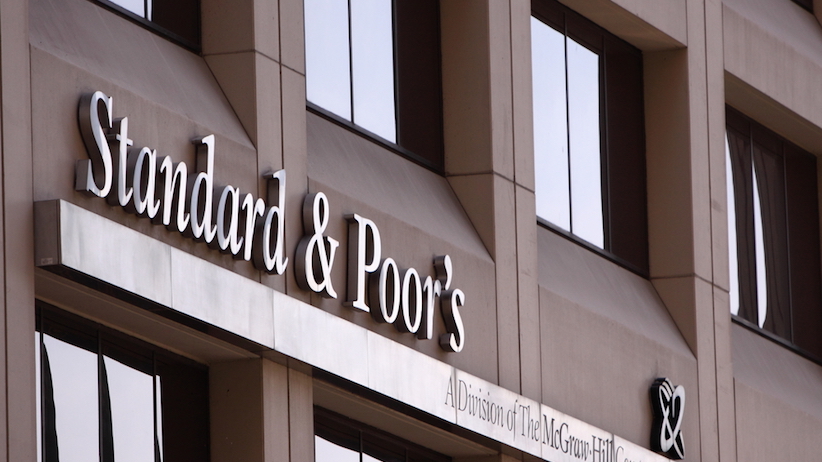 Canada’s provincial budgets aren’t in good shape. Eight out of ten provinces will run deficits this year, with BC and Quebec as the only two exceptions. (For data, see here.) This borrowing adds up. While the federal government has been steadily reducing its debt burden, the provinces have, in recent years, done the opposite. In fact, 2015 was the first year in Canadian history where the total debt (net of financial assets) held by the provincial governments exceeded that of the federal government. In a recent Maclean’s piece, Laval University economist Stephen Gordon notes this, and provides a startling chart:

In the same Maclean’s piece, University of Victoria economist Rob Gillezeau focuses on projections from the Parliamentary Budget Office that suggest this trend will continue. If nothing else changes, federal debt is expected to decline while subnational debt soars. Understanding provincial debt is therefore increasingly important, especially as many provinces are strained by low oil prices.

As a case in point, Alberta recently saw its credit rating downgraded by Standard and Poor’s — a major ratings agency. What are the implications of this decision? More generally: How do credit ratings differ across provinces? Do ratings matter for borrowing rates and government budgets? How are provincial debt markets interconnected? These are important questions; let’s try to shed light on their answers.

First, some basics. Governments do not borrow from banks in the way households do. Instead, their debt takes the form of a bond — which is nothing more than an IOU. Investors purchase these bonds, providing the government with money today in exchange for the government’s promise to repay the investor at a set time in the future along with pre-specified interest payments. The willingness of investors to buy these bonds is what determines the borrowing rate for government borrowing.

The market for government bonds is huge. There is an almost unimaginable quantity of bonds out there for investors to buy. At last count, there is nearly $1.2 trillion dollars worth of direct federal and provincial government bonds outstanding. And more are issued on a regular basis. 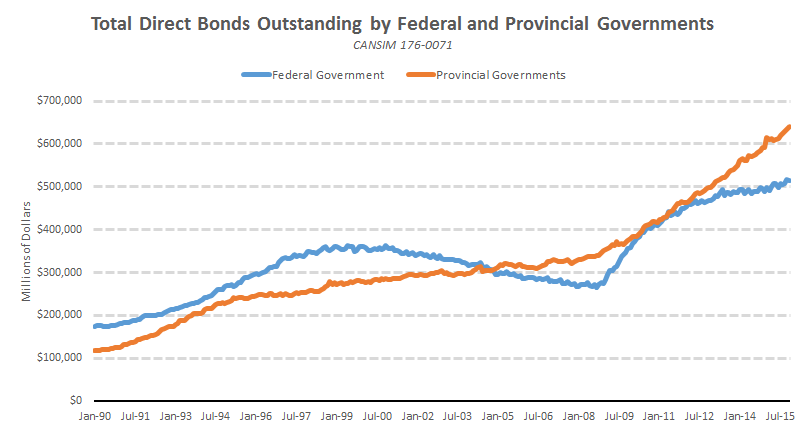 With so many bonds outstanding, small changes in borrowing rates can (with time) have large effects on government budgets. How investors perceive the quality of these bonds therefore matters.

There are countless metrics investors use to make these evaluations. One summary measure is a government’s so-called credit rating, provided by specialized firms that analyze the data and make judgements about risk. There are three main ratings agencies that score provincial debt in Canada: Standard and Poor’s (S&P), the Dominion Bond Ratings Service (DBRS), and Moody’s Investors Service. They assign to governments different ratings, and each agency has a unique scale. For S&P, AAA is the highest, followed by AA+, then AA, and so on. These ratings are subjective, and reasonable people can disagree about the meaning of the same underlying data. And, as you can see below (in a table available from the Alberta government here), the agencies do disagree. 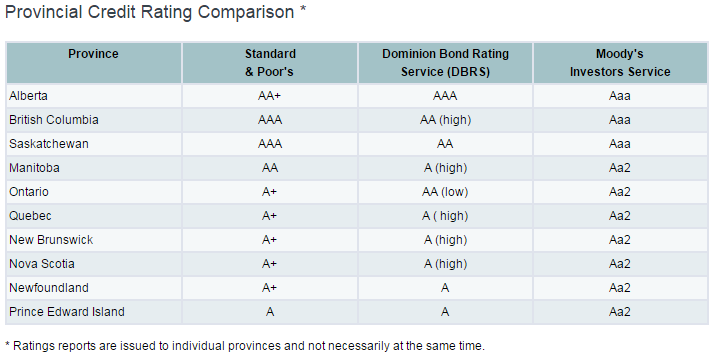 Do these credit ratings matter? On the day of the Alberta downgrade, Finance Minister Joe Ceci claimed the S&P decision would have little to no effect on borrowing costs at all. Opposition parties disagreed (here, here, here). So who is right?

Normally, ratings affect a bond’s yield. This shouldn’t be surprising. Triple-A beef is worth more than double-A beef, and the same is true of bonds. Higher quality bonds are worth more, so the borrower can raise more money today for the same promise to repay in the future – put another way, it’s cheaper to borrow when one’s credit rating is strong. Of course, this is only normally true and it’s also important to know how large this effect is.

Let’s look at the data. First, borrowing rates differ very little across provinces, despite the wide variation in credit ratings. 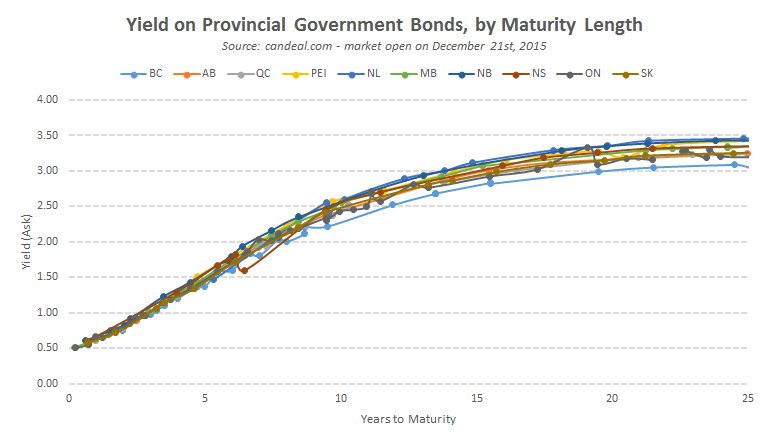 Let’s take a closer look and plot the 25-year yields facing each provincial government, along with their S&P credit rating and the yield on the federal government’s bonds for comparison. 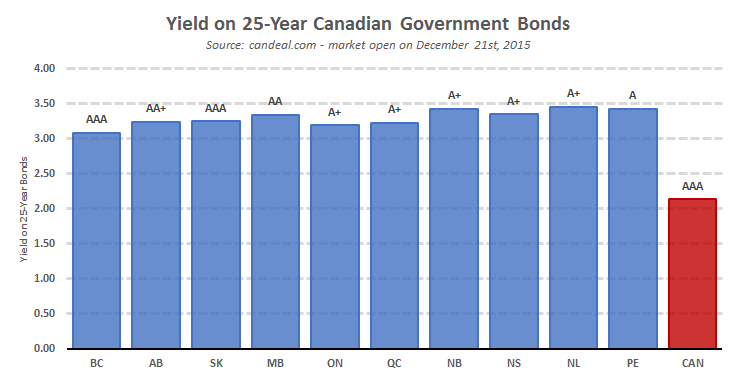 It costs Atlantic Provinces more to borrow than most others, with yields on a 25 year bond from those governments approaching 3.5 per cent. Manitoba also faces higher borrowing rates, at 3.35 per cent. Ontario borrows at 3.2 per cent with a credit rating of A+ while Saskatchewan and Alberta borrow at 3.25 per cent, despite both provinces have higher ratings. BC leads the pack with the cheapest rates, at only 3.1 per cent.

The biggest factor behind these differing borrowing rates seems to be size. Smaller provinces have higher borrowing costs than larger provinces. This makes sense. Large provinces have far more dollars of debt outstanding than small provinces do. Ontario has nearly $300 billion in direct debt bonds outstanding while PEI has less than $2 billion. (For the data, see here.) The more bonds there are floating around out there, the easier it is for investors to buy and sell them. The willingness to pay for this ease of transacting is called a “liquidity premium”. 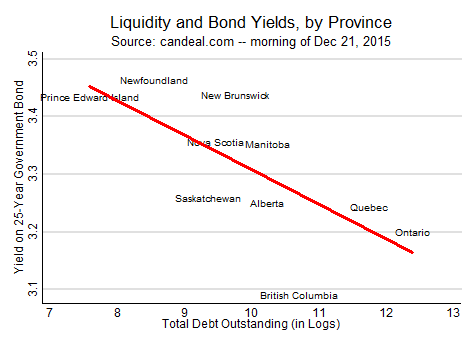 The more bonds there are floating around out there, the lower the borrowing costs for the government. On average, 10 per cent more outstanding debt lower the yield by 0.05 per cent.

Next, we can check to see whether credit ratings matter after accounting for liquidity. Specifically, take what’s left unexplained by liquidity effects and plot that against credit ratings. (More precisely: regress yields on log debt outstanding for 25-year bonds, then take the residual and plot this again credit ratings.) 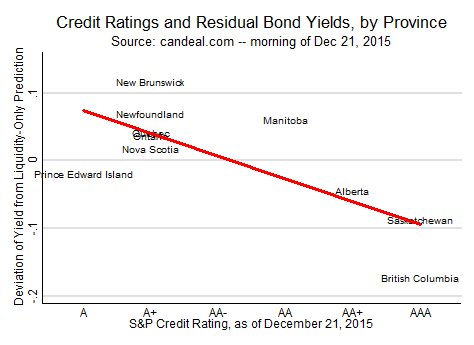 So, credit ratings matter, though not that much. On average, each notch on the S&P ratings scale is associated with 0.04 per cent higher yield on a 25-year bond. (Note: if we do not adjust for liquidity effects, then the average notch on the S&P scale is associated is still around 0.04 per cent.) It is also clear in the plot, though, that there are still large differences in yields between provinces that share the same credit rating. Saskatchewan is far above BC, for example, and New Brunswick is far above Nova Scotia.

Next, see how yields change over time and ask: Did Alberta see rates change before or after the S&P downgrade? Not really. Yields moved a bit, as they normally do from one moment to the next, but BC and AB changed by similar amounts between Friday and Monday. Even on Thursday, the day before the downgrade, Alberta yields on a 30-year bond were 0.18 per cent higher than a similar term BC bond — the same premium as prevailed the following Monday.

Of course, it may take time for the effects of the downgrade to be fully incorporated into yields. More likely, though, yields reflect underlying fiscal challenges facing Alberta that were already priced into the borrowing costs of the government. Let’s take a look at yields over the past year for long-term government bonds in BC, Alberta, and Saskatchewan. (The specific bond coupon rates and maturity dates stated in the chart’s legend identify the particular bond issues.) 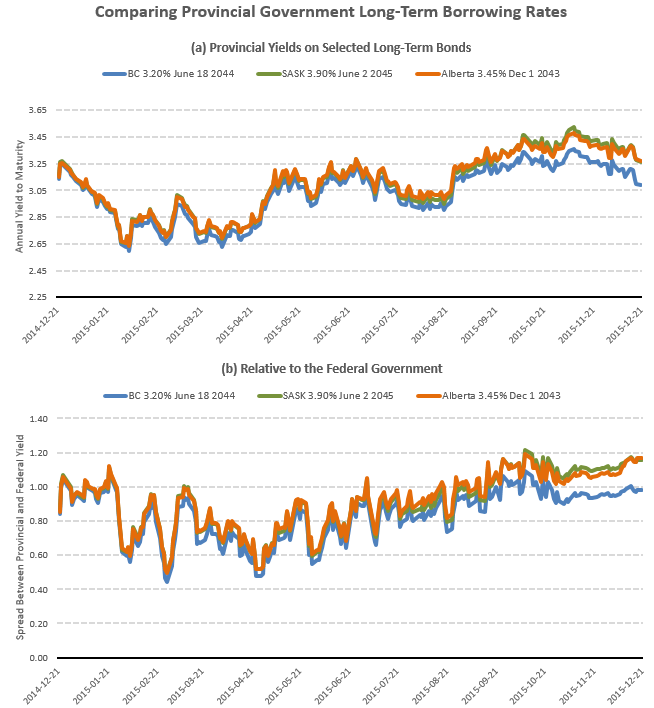 The yield on Saskatchewan and Alberta bonds gradually and steadily increased over the past year relative to BC. Despite Alberta’s downgrade, its borrowing rate is the same as Saskatchewan, and both are now about 0.18 per cent higher than BC. The downgrade itself may have no effect because it merely recognizes what market participants already knew: Alberta is in a tough fiscal spot. (For more on Alberta’s budget challenges, see this.) This point deserves repeating: a rating reflects the government’s fiscal situation, and it’s the fiscal situation that matters more for borrowing rates.

So, after all this, how much do changes in borrowing costs matter for government budgets? Consider first the recent Alberta budget. It projects deficits in each of the next four years, totaling approximately $18 billion. These deficits will be financed through borrowing — that is, by issuing debt in the form of government bonds. But it’s not just deficits that must be financed at higher borrowing rates. There are existing debts that will mature, requiring the government repay investors or roll-over these bonds into new issues at the now higher rate. Over the next 30 years, Alberta will have approximately $30 billion in bonds mature. (For the schedule, see this.) Higher rates will gradually increase the overall borrowing cost of the government. There are also borrowings for government expenditures that do not count towards the budget. Capital investments are not expensed immediately, as they are only gradually amortized over many years. The government is borrowing for this purpose as well.

As a quick back of the envelope calculation, take the projected borrowing from now to 2019/20 and add to that all maturities scheduled for existing government bonds. From page 4 of the Alberta budget, there will be nearly $35 billion in what’s called fiscal plan borrowing between now and 2019/20. There will also be about $9 billion in existing debt maturing. From these numbers, we can see by how much 0.18 per cent in higher borrowing rates (the gap between Alberta and BC) would cost the government budget if sustained at that level for the next few years. 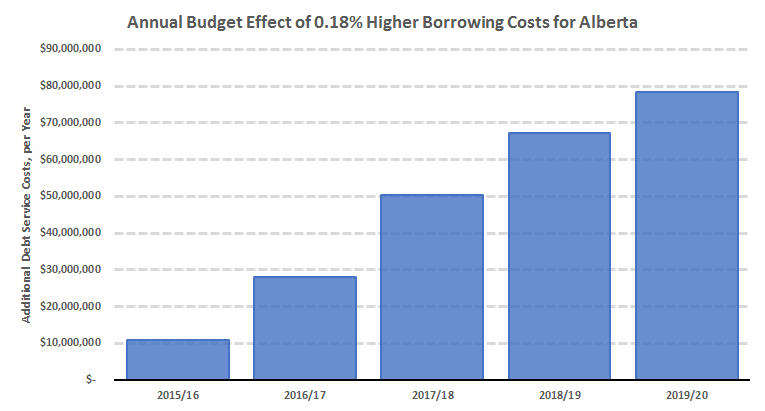 By 2019/20, the increase of 0.18 per cent for Alberta borrowing costs results in nearly $80 million in additional costs per year for the government — relative to the hypothetical situation where borrowing rates remained at BC’s level. Not large relative to the entire budget, but it certainly isn’t chump change.

But it’s not just the province with a worsening fiscal situation that pays; all other governments — provincial and federal — share in the burden to some degree. A critical reason why provincial borrowing rates do not differ much from one another is an implicit guarantee from the federal government to step in during times of crisis. This has happened in the past, notably during the Great Depression when the federal government assisted many provinces having difficulty servicing debt. (For a great review, see Appendix B of this recent report.) Investors will therefore incorporate the budget problems of any one province into decisions about buying federal government debt, which will therefore affect borrowing rates of other provincial governments as well. This implicit federal guarantee presents what’s called a moral hazard problem for the provinces — excessive debt is less of a problem when its ramifications are shared with the federal government. Canadians in all regions should therefore watch the mounting provincial debts with concern.

So what can be done? Deficits are normal in tough times, but permanent deficits are a risky (and unnecessary) policy choice. To eliminate them, either taxes must rise or spending must fall (or both). Neither is pleasant, and the costs and benefits of each choice are felt differently by different people. But, if difficult budget decisions are not made, government debts will mount, borrowing costs will rise (and credit downgrades will reflect this), and Canadians down the line will have even more difficult fiscal decisions to make and be less prepared to make them.