The claim that the TPP will lead to massive job losses in the auto sector is built on dubious assumptions, and overlooks the deal's benefits to consumers 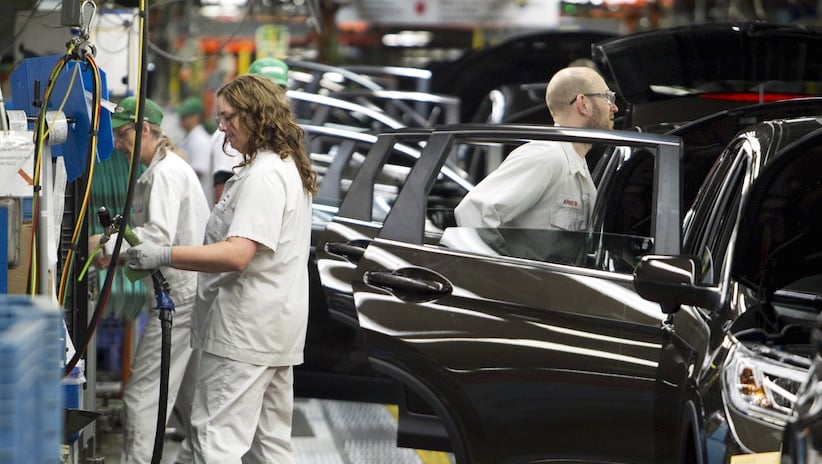 The latest meme to circulate in Canadian economic policy circles is that the Trans-Pacific Partnership could cost 20,000 automotive manufacturing jobs in Canada. Unlike the oil bailout meme, the TPP automotive meme has an obviously identifiable source: my good friend Jim Stanford, the now-ex chief economist of Unifor. The estimate is a rounding from the Sept. 22, 2015, blog post “TPP: Renegotiating NAFTA, By the Back Door” where Stanford writes:

[T]he industry could outsource approximately one-quarter of the value of its existing value-added activity to jurisdictions outside of the TPP, yet still preserve its made-in-the-TPP trade preferences.  Applying the lower of these two weighted-average calculations (24 percentage points) to Canada’s existing automotive manufacturing footprint (and assuming that the dislocation for Canada’s industry is only proportional to the overall North American shrinkage, an assumption which is probably optimistic), allows us to generate an estimate of the potential scale of economic loss if the U.S.-Japan rules were implemented. Canada could lose 24,600 jobs (ie. 24% of existing automotive manufacturing employment), $6 billion in parts shipments, and a large chunk of its assembly footprint as well.

The blog post, along with Jim’s 2014 reports CETA and Canada’s Auto Industry and Canada’s Auto Industry and the New Free Trade Agreements are invaluable resources for anyone wanting to learn more about Canada’s automotive industry and recent trade agreements. That said, the claim that TPP could cost 20,000 jobs simply does not hold up to scrutiny, for three reasons. To understand why, a short primer on the industry is useful.

In 2015, Canadians purchased roughly 1.9 million cars and light trucks and assembled roughly 2.4 million, causing a trade surplus in vehicles of around 500,000 units. Toyota and General Motors assemble the most vehicles in Canada, each representing 26 per cent of the market, with Chrysler at 23 per cent, Honda at 17 per cent and Ford making up the rest at nine per cent. Because Canada makes a limited set of models, around 80 per cent of cars driven by Canadians were imported from other countries, and 85 per cent of the cars assembled in Canada are exported to other markets, with the overwhelming majority destined for the United States. In 2014 (the most recent year with data), 68,000 Canadians were employed in “motor vehicle parts manufacturing”, 40,000 more were employed in “motor vehicle manufacturing” (assembly) and an additional 13,000 had jobs in “motor vehicle body and trailer manufacturing” (Statistics Canada provides a useful historical comparison for these figures).

Assuming TPP does not affect the total number of cars and trucks sold in North America (in reality, the number of vehicles should increase somewhat due to the downward impact tariff removal will have on prices), TPP could affect employment levels in Canada through several mechanisms:

With that context in mind, here are the three reasons why the 20,000 job loss estimate does not hold up to scrutiny.

1. It gets the counterfactual wrong

The Stanford estimate is based on comparing a world with TPP to one without TPP. But from Canada’s perspective, that is not the most relevant question, as Canada cannot unilaterally scuttle TPP. The more relevant question in the automotive employment context is “how many jobs will Canada gain or lose being inside TPP versus outside of it?” Examined this way, much of the possible routes of job loss are eliminated. Suppose, for the sake of argument, that Canadian automotive assemblers will lose market share in the United States because American tariffs on cars assembled in Japan are lowered (and, again, this is only a hypothetical).

Those tariff reductions (and subsequent Canadian employment declines) happen regardless of whether or not Canada is a signatory to TPP, which is significant given that only a small percentage of Canadian assembled vehicles are for domestic consumption. Furthermore, Canadian assembly plants and parts manufacturers would be placed at a significant disadvantage if Canada is outside of TPP, as American and Mexican factories would receive beneficial rules of origin treatment under both NAFTA and TPP, while Canadian plants would only fall under NAFTA. A TPP-less Canada would be fighting with one hand tied behind its back when trying to attract automotive assembly or part-manufacturing mandates.

Even if the relevant counterfactual were a world with TPP versus one without, the 20,000 estimate would be highly problematic, but much of the potential for job loss falls away completely when the more pertinent counterfactual is used.

2. It is contradicted by economic studies on the issue

Jim and I are kindred spirits when it comes to the value of back-of-the envelope modelling of economic effects. In the absence of a detailed study, very simple models are incredibly useful in sketching out the possible effect of a policy, so I use them quite often. However, we are not limited to back-of-the envelope calculations as there exist two detailed studies of the possible automotive employment effect of TPP.

In “The Trans-Pacific Partnership is a trade agreement, and then some,” Head and Mayer find a net gain of automotive assembly jobs in Canada, largely at the expense of Mexico:

The orange bars add the MP gains to the TPP (a rise of operating efficiency in another member state that we estimate to be around 6 per cent). From the point of view of Japanese workers, deeper integration is unappealing, as it reduces the gains in production by about 500,000 cars (1.1 versus 1.6 million). This occurs because TPP raises efficiency in Japanese plants in the U.S., Australia, Canada, Mexico, Malaysia, and Vietnam. The response to this ‘γ effect’ is big enough for Canada to convert a net production loss of 163,000 into a production gain of 229,000. The main changes are due to Canadian Toyota and Honda factories, which are predicted to ship nearly 100,000 fewer cars to the U.S. under shallow integration, while they increase their sales to the southern neighbour by more than 80,000 if the ‘γ friction’ also falls. In contrast, the plants located in Mexico face greater erosion of preferences when serving the US and Canada as the TPP experiment applies deeper integration. This is due to the fact that Mexico already has a regional trade agreement in place with Japan since 2005. Therefore, the ‘γ gains’ by Japanese brands operating in Canada or the US are very harmful to Mexican plants of the same brands, which do not experience any gains, and instead suffer from a strengthening of competition in their main markets.

The highest effect we ever find for Canadian trade policy is in the case of full unilateral elimination of tariffs for vehicles from all three trading partners—Korea, Japan, and the E.U.—and assuming a restrictive demand system. Even in this scenario, total loss of local production is estimated to be at most 14,407 vehicles, or 0.70 per cent of total domestic production. Using the average jobs-per-vehicle ratio for the entire Canadian automotive market, this translates into 660 jobs.

Neither model produces results even within an order of magnitude of a 20,000 job loss. Of course, these two models do not model every possible dynamic, so it is certainly possible that they are wrong and Stanford’s estimates are closer to the truth. However, given that these models are more sophisticated, consider more factors, and get to similar (though non-identical) results through very different means, my money is on the models.

3. The 20,000 estimate is highly sensitive to two rather dubious assumptions

It is helpful to return to Jim’s blog post to see where the 20,000+ job estimate comes from. Here are the details, direct from the post:

Another way of calculating the proportional reduction in the content rule, is to consider the combined effect of the two thresholds. An auto part can qualify as TPP-made with just 30 per cent TPP content. A vehicle can qualify as TPP-made if 45 per cent of its content originate within the TPP — including auto parts which only had minority TPP content in the first place.  This “double jeopardy” effect means that the theoretical minimum regional content for a finished vehicle to qualify for TPP trade preferences would be only 13.5 per cent(equal to 30 per cent of 45 per cent).  That is a theoretical minimum; in practice, true content will be higher than that (in part because the deal would require final assembly within the TPP to qualify for tariff-free status).  The equivalent value for NAFTA is 37.5 per cent (60 per cent of 62.5 per cent), hence the weighted average reduction in the regional content threshold is 24 percentage points.

By either method, the industry could outsource approximately one-quarter of the value of its existing value-added activity to jurisdictions outside of the TPP, yet still preserve its made-in-the-TPP trade preferences. Applying the lower of these two weighted-average calculations (24 percentage points) to Canada’s existing automotive manufacturing footprint (and assuming that the dislocation for Canada’s industry is only proportional to the overall North American shrinkage, an assumption which is probably optimistic), allows us to generate an estimate of the potential scale of economic loss if the U.S.-Japan rules were implemented. Canada could lose 24,600 jobs…

Emphasis added by me. There are at least three rather large problems with these assumptions:

The Stanford model is based solely on the dual assumptions of “companies source at the minimum” and “Canada retains NAFTA proportionality,” neither of which are at all realistic. The results of Stanford’s model should be seen as a mathematically possible but highly unlikely outcome.

Finally, there’s one big group that’s missing in all of this: the consumer. Head and Mayer find that:

Canadian consumers gain 6.8 per cent under deepest integration. This is because the reduced cost of distributing Japanese models in Canada leads to greater variety of Japanese models available at lower prices.

Greater variety and lower prices? That is a fantastic win for Canadians, even without considering the secondary effects of Canadians spending or investing those extra dollars.

Disclosure: Mike Moffatt is the co-owner of Nexreg Compliance, which provides regulatory consulting services to manufacturers, including several in the automotive industry. Mike has also had a number of helpful background conversations with the Japan Automobile Manufacturers Association of Canada (who are not a Nexreg client) on trade issues. The opinions expressed in this piece do not necessarily represent those of Nexreg Compliance, its clients, or the Japan Automobile Manufacturers Association of Canada.