On Toronto's stock exchange, it's not always great being in first

The biotech giant Valeant is now at the top of the heap in Canada. Will it succumb to the curse of being the biggest company in the land? 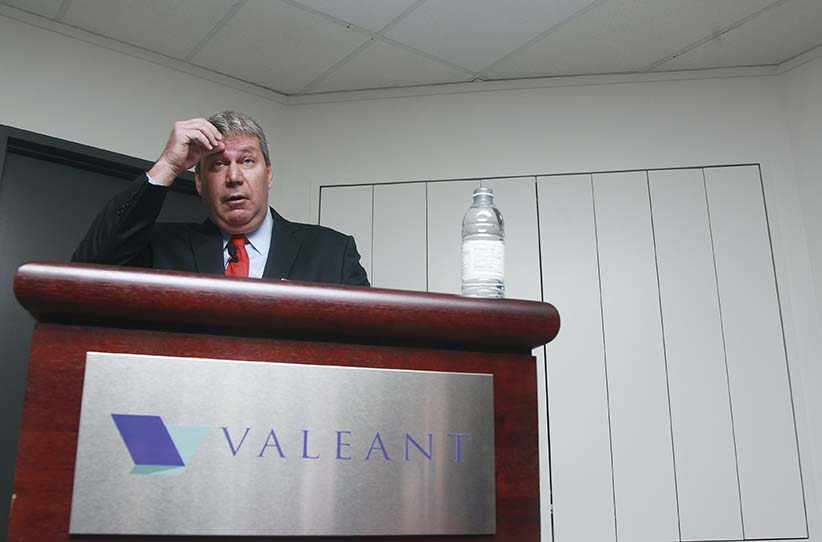 It’s a generally accepted axiom in business that bigger is better. Bigger sales, bigger profits, bigger market share. And in Canada right now, the title of biggest company just got snatched away from the biggest of the Big Five banks, Royal Bank of Canada (RBC). The new big kahuna on the Toronto Stock Exchange, when measured by market capitalization—meaning the total value of its outstanding shares—is a drug company from Laval, Que., named Valeant Pharmaceuticals, worth roughly $115 billion.

But is bigger really always better? That’s a valid question when it comes to Valeant, not only because of the grim fate that befell other companies that have preceded it in that top spot, but also because of the persistent questions swirling around how it got there.

It certainly would seem as if congratulations are in order for Valeant’s chairman and CEO, Michael Pearson, the former pharmaceutical consultant who has spearheaded the company’s rapid ascent and wants to transform Valeant into one of the five most valuable drug companies in the world by 2017. In the time since he took the helm at Valeant (then based in California) in 2008, the company has snapped up some 80 other drug companies, including the blockbuster reverse takeover of Biovail in 2010 that made it a Canadian company. Revenue has more than tripled, to $8.3 billion since 2011, while, in the last year, the company’s stock price has soared 150 per cent.

That, folks, is how you get to be the biggest company in the land. It’s also the type of hyper-growth that catapulted several other high-flyers into that spot in the past—and established what can only be described as the curse of being number 1. Here are superstar companies that have climbed the ranks: Nortel, BlackBerry, Potash Corp., Barrick Gold, and Encana. Spot the trend? They’re all now shadows of their former selves. Nortel is gone, BlackBerry is struggling to survive, and Potash shares are 65 per cent off their peak. Meanwhile, Barrick has erased a decade of gains and Encana shares are wallowing at the lowest level they’ve been in 15 years.

There’s a very good reason RBC is so hard to permanently unseat from the throne: Canadian banks, thanks to government protections that shield them from competition—not to mention government and central bank policies aimed at inflating house prices—are licences to print money. The flame-outs that have periodically usurped the banks, on the other hand, can best be described as “new paradigm” stocks. They’re companies that have ridden a wave of investor excitement for big, world-changing ideas—from “the Internet will change everything” mantra that lifted Nortel, to the idea that the world was running out of oil, in the case of Encana. With Valeant, investors can’t get enough of biotechs and the advances in health research they are pioneering. As an rabid acquirer of biotechs, Valeant has become a favourite of hedge funds and analysts.

Now that Valeant is No. 1 in Canada, there’s nothing to say it can’t be the first to dodge the curse. Big investors such as U.S. hedge fund billionaire John Paulson continue to lay big bets on its future; he increased his stake fourfold earlier this year. But it’s also true that Valeant’s rise has been accompanied by serious questions about its growth strategy and results. Consider the latest surge in the company’s stock, which launched it into the No. 1 spot. The gains came after Valeant posted a $897-million profit in the second quarter.

Or was that a $53-million loss? Take your pick. You see, with Valeant, it all depends on how you want to read the company’s financial statements. It’s either an incredibly successful company churning out profits quarter after profit-gushing quarter, or a regular money-loser. One set of results, the less pleasant ones, reflect generally accepted accounting principals (GAAP). But Valeant would prefer investors pay attention to its “cash earnings,” a non-GAAP measure that accounts for one-offs such as merger and restructuring charges, write-downs and other impairments. Over the past five years, Valeant would have reported three annual losses, were it not for such adjustments. But, aside from a few spoilsports like short-seller Jim Chanos, who’s accused it of engaging in “very aggressive accounting games,” most investors have been happy to play along.

It’s important to remember that, whether they know it or not, Canadians are along for the ride. If you’re an investor in a Canadian equity index fund, Valeant is now at, or near, the top of your fund’s holdings. Even many actively managed funds have piled into Valeant shares; money managers might know the obvious risks of chasing such a red-hot stock, but missing out on its stellar gains means their funds will look like duds by comparison. Even if you aren’t an investor, Valeant was the third-largest equity holding of the Canada Pension Plan Investment Board as of March, and the fund has been rapidly adding to its position.

For now, Valeant is number 1. To stay on top, though, it has a lot of history to defy.