Policy, not pipelines, will determine if we meet our goals

Do pipelines prevent Canada from meeting its targets? Does approving new pipelines mean we’re betting the world won't act? The answer to both is 'no'. 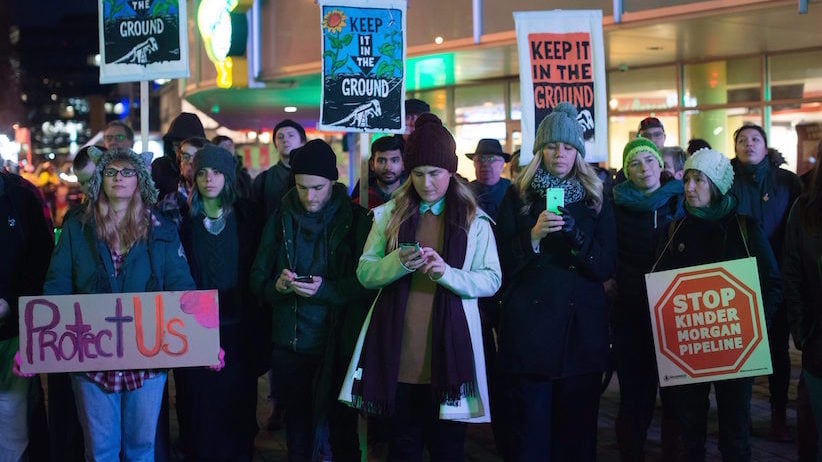 People listen during a protest against the Kinder Morgan Trans Mountain Pipeline expansion project, in Vancouver, B.C., on Tuesday November 29, 2016. Prime Minister Justin Trudeau approved the $6.8-billion project that will nearly triple the capacity of the pipeline that carries crude oil from near Edmonton to the Vancouver area to be loaded on tankers and shipped overseas. THE CANADIAN PRESS/Darryl Dyck

Kinder Morgan’s TransMountain pipeline and Enbridge’s Line 3 are now approved; but whether they are built is another question entirely. The decision sparked optimism among some and outrage among others. Two concerns stand out.

First, some claim new pipelines are contrary to Canada’s commitments under the Paris Agreement. Green Party leader Elizabeth May said on CBC’s The House on Wednesday, “you can’t say you’re going to fight greenhouse gases, and approve a lot of projects that increase greenhouse gases.” And Dale Marshall (the national director of Environmental Defence) declared “the math does not add up.” Are they right?

Second, some question whether more pipelines are even necessary. UBC political scientist Kathryn Harrison, for example, penned a recent opinion piece for the Globe and Mail, writing that “in approving infrastructure that promises to increase Canada’s bitumen exports for decades to come, the federal government is … placing a bet against the success of the Paris climate agreement.” In other words: if the world acts on climate, more pipelines are unnecessary.

This debate will only grow fiercer, so it’s important to think carefully about these concerns. Do pipelines prevent Canada from meeting its goals? Does approving new pipelines mean we’re betting on the world not acting? Below, I’ll argue “no” to both question.

If Canada misses its climate target, it won’t be because of pipelines but because of policy. Let me explain.

The Dofasco steel plant in Hamilton, Ontario emits roughly five million tonnes of greenhouse gases every year. Would closing this facility lower Ontario’s emissions? It might seem obvious that the answer is yes… but it’s not.

Closing the facility will not affect Ontario’s emissions because the province will soon enact a cap-and-trade system. Such a system sets the total level of emissions and then auctions them off. If one large emitter shuts down and no longer bids, then the price of carbon will fall and other emitters will take its place. The same holds in reverse. Opening a new emissions-intensive facility will not increase Ontario’s emissions. The carbon price will simply rise, with the total emissions determined (as before) by the cap. (This is a stylized example, of course. Ontario’s actual system may feature a few devils in its details.)

Here’s the key: it’s policy not projects that bear responsibility for our emissions target. The same is true of pipelines.

The Core of The Debate, and the Politics

With respect to climate concerns, the debate is a simple one. Do we want to lower emissions? If yes, do we want to do so at the least possible cost? If yes, then carbon pricing is clear the way forward.

A supplementary question is, by how much should we reduce emissions? There’s an argument that meeting a particular quantity of emissions in Canada is not the optimal goal. We can price our emissions at a reasonable level in line with (the admittedly uncertain) social cost of carbon and let the chips fall where they may. I make this argument elsewhere, so for now let’s take Canada’s 2030 GHG target as given.

Those opposing pipelines clearly want to lower emissions, but often fail to examine the cost effectiveness of that choice. Those that do, and accept the evidence that carbon pricing is the most efficient option, then claim it’s nonetheless politically infeasible to price carbon. Thus, the argument goes, we are left with few other options than to block pipelines.

The past year in Canadian politics is strong evidence against this view. With a carbon tax in Alberta, one long standing in British Columbia, a pro carbon tax government recently elected in the Yukon, a cap-and-trade program in Nova Scotia, Ontario, and Quebec, and a nationwide minimum price coming soon, efficient policy is now firmly on the table. This is strong evidence that political leadership is indeed sufficient to implement efficient policy. Conservative Party leadership candidate Michael Chong is further evidence of this. Those wishing to lower emissions responsibly should support such efforts.

Calls to block pipelines also risk severe blowback by undermining the political case for pricing. If pipelines are successfully blocked, the political case for hard won carbon pricing gains may collapse. Premier Notley and Prime Minister Trudeau both went to great lengths to connect Alberta’s carbon policies with pipeline approval. If the pipelines fail, many will judge the carbon tax a failure too. A Canada with no pipelines and no carbon price is worse for the climate than one with pipelines and proper pricing.

Does the Math Add Up?

It can’t be denied that new pipelines will increase upstream emissions. Elsewhere I’ve noted National Energy Board estimates suggest roughly 10-11 million tonnes of upstream GHG emissions might be avoided if no new pipelines are built. But approving pipelines need not cause such an increase in the total if reductions elsewhere compensate. As with our earlier thought experiment, it comes down to policy.

New pipelines may mean the price on carbon must rise to meet the target. Without pipelines, it may be that a $120 per tonne price by 2030 achieves the target (to pick a random number). But with pipelines we would instead need $130. If the carbon price responds, then a Canada with new pipelines has the same total emissions as a Canada without.

And this is entirely optimal. There are many ways to lower emissions, some more costly than others. A famous illustration of the range of possible choices is from McKinsey & Company’s latest estimates of the cost of various options to lower emissions. I reproduce their key figure below. 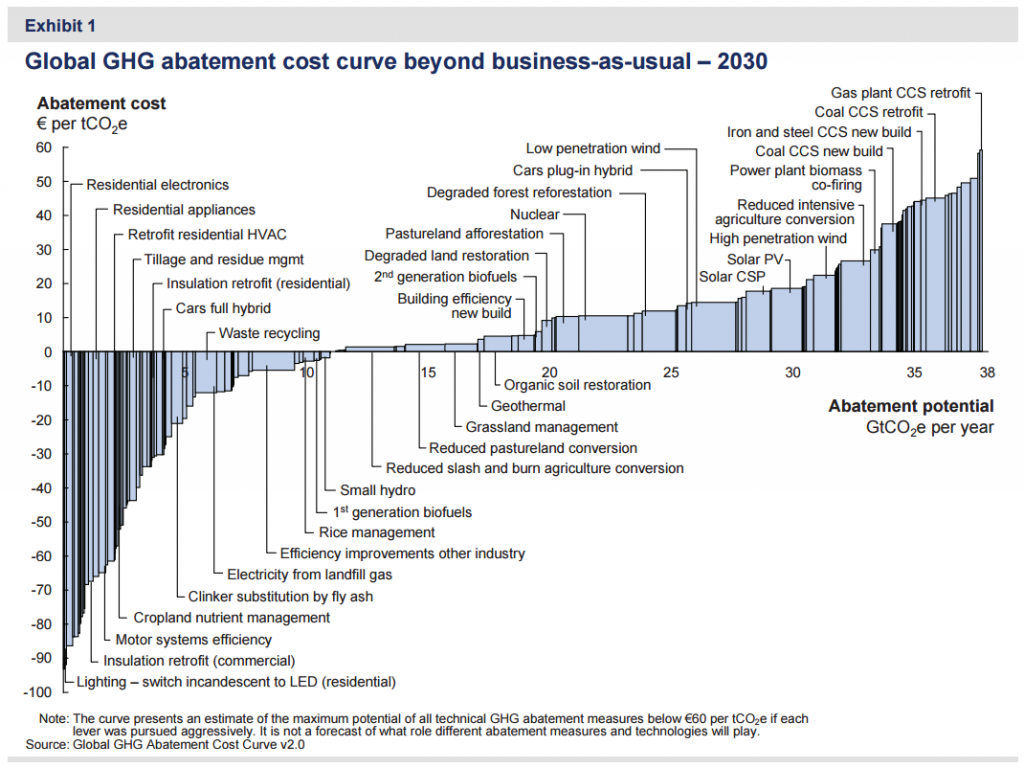 The beauty of carbon pricing is that governments do not need to decide what to do. It provides an incentive to households and businesses to find their own way. Millions of small decisions, all likely cheaper than the carbon price itself, add up to substantial action.

One of the most expensive options is to block pipelines. I’ve analysed the costs in detail in an earlier piece (here), but can summarize the key message in one graph. 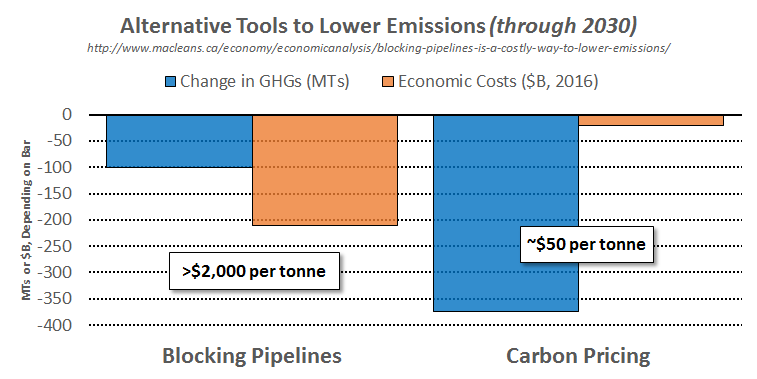 Will Pipelines be Used?

Whether pipeline capacity is “needed” or not is, in many important ways, a business decision. Putting billions of dollars down is a strong bet, by the company, that the money won’t be wasted. To the extent that this is due to an expectation that the world won’t act to lower demand for fossil fuel, the solution is not to block pipelines but to advocate for more international action.

Concerns of policy makers should be limited to safety, spill risks, aboriginal land claims, engineering regulations, ensuring the new pipelines doesn’t disadvantage others (through network effects), and so on. But to a first approximation, if public dollars are not subsidizing the project, then a willing company proposing to build a pipeline is a strong signal that it will be used. And if they turn out to be wrong, the company’s shareholders bear the cost.

It’s nonetheless informative to have a sense of what capacity is needed. So let’s take a look.

Forecasts vary, and change over time, but all point to substantial increases in Western Canadian production. Roughly speaking, both the Canadian Association of Petroleum Producers and the National Energy Board forecasts expect growth equivalent to TransMountain’s capacity every five years between now and 2030. That’s 1.5 million barrels per day in additional production by 2030.

I plot a useful graph below. Clearly, much depends on the price of oil—as seen by the dramatic drop in CAPP forecasted growth in 2016 after the oil price collapse. But oil prices can rapidly change. Last Wednesday, OPEC decided to cut production by 1.2 million barrels per day. Within two days, oil prices jumped over 13 per cent on the news. 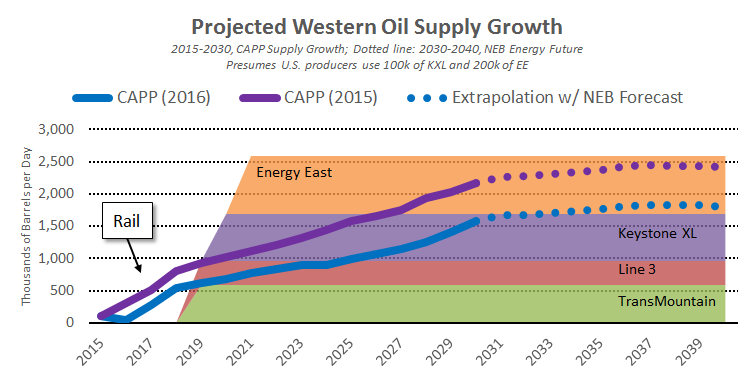 There’s also growth south of the border to consider. Oil from the U.S., primarily the Dakotas and Rocky Mountain states, is set to grow substantially. The Energy Information Administration expects oil production in those regions to rise by over 1 million barrels per day by 2030.

Keystone and Energy East can help those producers. Thus, in the earlier pipeline capacity graph, I presumed a modest 100,000 barrels per day of Keystone, and 200,000 barrels of Energy East, capacity would be used by U.S. producers. Though this could be even higher. TransCanada is already proposing to build a 300,000 barrel per day pipeline from North Dakota into Canada to link with Energy East. (The Upland Pipeline.)

There are also additional considerations. First, pipelines are like insurance for oil and gas producers. Energy markets are uncertain, and high prices may lead to costly bottlenecks if insufficient pipelines exist. In 2013, the price discount Alberta producers received approached $40 per barrel less than West Texas Intermediate on some occasions. This hurts everyone from companies and workers to governments and more. There are also concerns Canada’s export market diversification. In 2015, 99 per cent of Canada’s crude oil exports went to the United States, with half going to only two states: Illinois and Minnesota. TransMountain and Energy Easy help diversify our markets and expose us to fewer political and regulatory risks abroad.

There is surely much left to discuss, on both sides of the issue. But Canadians deserve calm and reasoned debate. It’s a problem when Members of Parliament publicly state their willingness to go to jail to stop a particular project from being built. Whether you support additional pipelines or not, we can do better.

Passionate advocacy to take action and lower global emissions is laudable. Climate change is a problem, but blocking pipelines is not the solution. Such efforts may distract from good policy at best, and jeopardize it at worst. While spill risks and aboriginal consultation and land claim issues are critically important, climate concerns around pipeline approvals should be off the table. Efficient policy, and cooler heads, must win the day.

Trevor Tombe, Assistant Professor of Economics at the University of Calgary and Research Fellow at the School of Public Policy