The Bank has taken to YouTube to warn Canadians about the dangers of too much debt and unrealistic house price expectations. Will anyone listen? 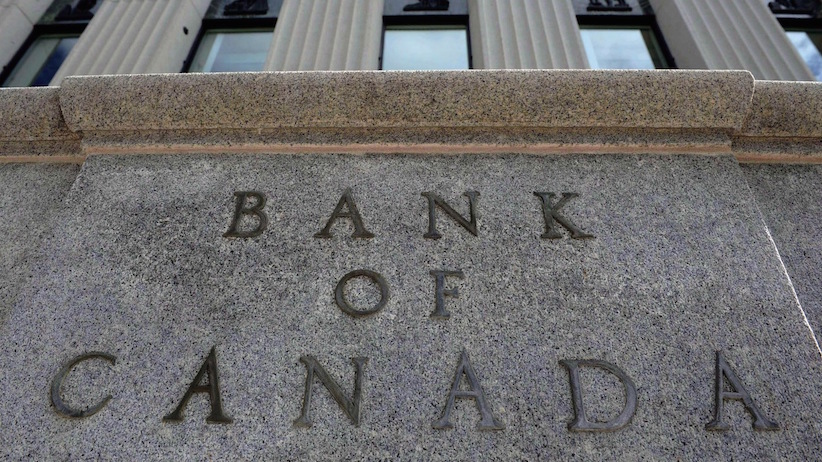 The Bank of Canada marker is pictured in Ottawa on September 6, 2011. The Bank of Canada will release its latest monetary policy report this morning — a document expected to explore the economic damage inflicted by falling oil prices. THE CANADIAN PRESS/Sean Kilpatrick

In recent months the Bank of Canada has ramped up its warnings about heavily indebted households and the unreasonable expectations driving the housing market, yet all indications are that Canadians have stuffed cotton in their ears.

In Toronto, for instance, house prices are up nearly 15 per cent since the summer when Bank of Canada governor Stephen Poloz warned that price gains in the city were “difficult to match up with any definition of fundamentals that you could point to.” In the more than 15 years that the Teranet-National Bank House Price Index has tracked property prices in the city, there’s never been a six-month period when prices rose that fast. Meanwhile, the latest figures released by Statistics Canada showed the household debt-to-income ratio broke yet another record in the third quarter.

Now Canada’s central bank is trying a different platform to get its message across: YouTube.

In a video posted Monday on YouTube, in conjunction with the release of the Bank’s semi-annual financial system review last Thursday*, Bank of Canada senior policy adviser Joshua Slive sketches out how Canada’s dangerous brew of debt and inflated house prices could combine to devastate the economy.

Here’s the scenario that worries the Bank.

1. As the Bank has pointed out already, households are highly indebted and house prices are rising at an unsustainable rate, though as Slive observes, people can often cope with these vulnerabilities for an extended period. 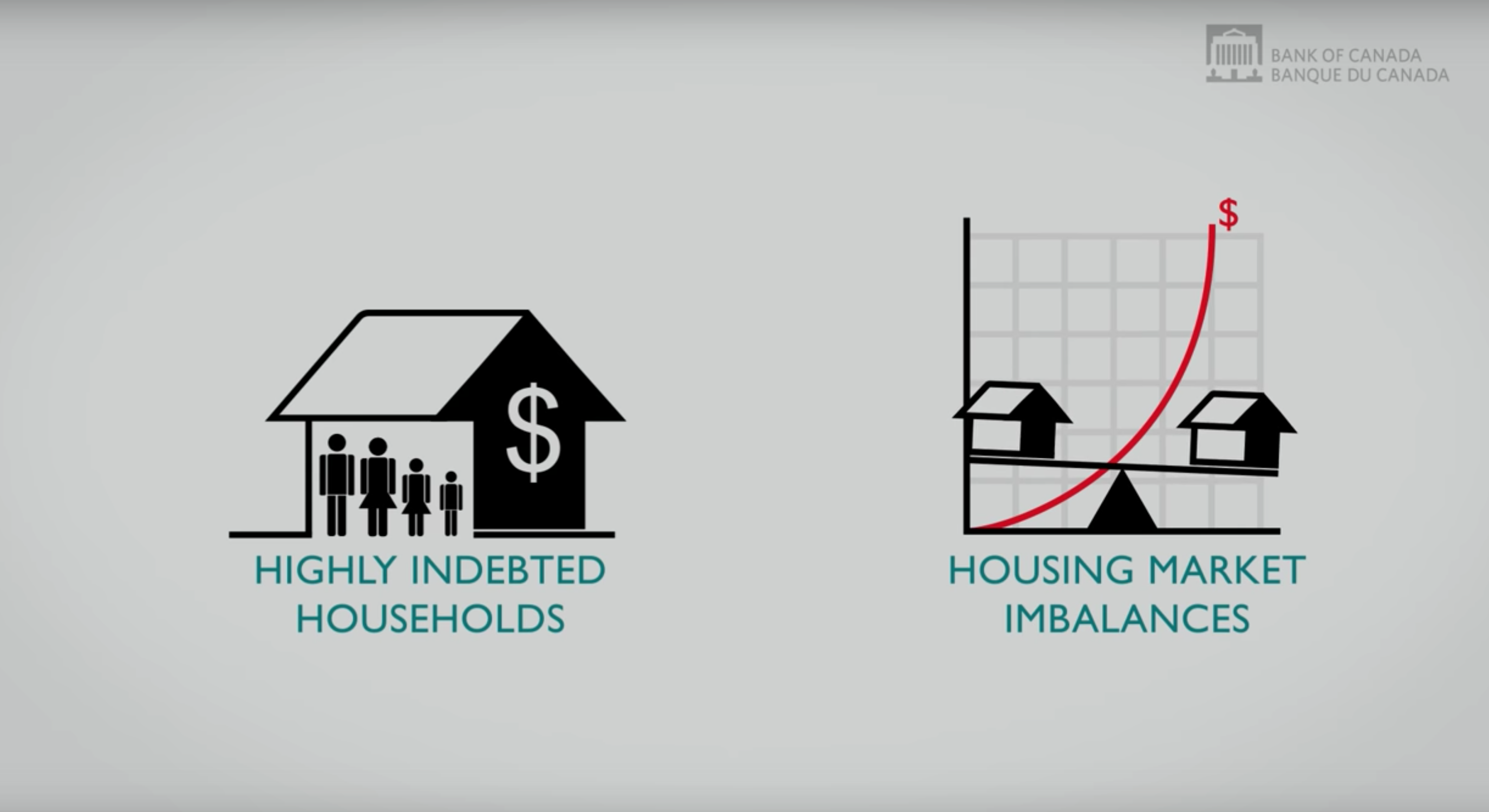 2. That is, until an economic shock triggers a negative chain of events. For instance, a severe recession would lead to “a sharp increase” in unemployment. 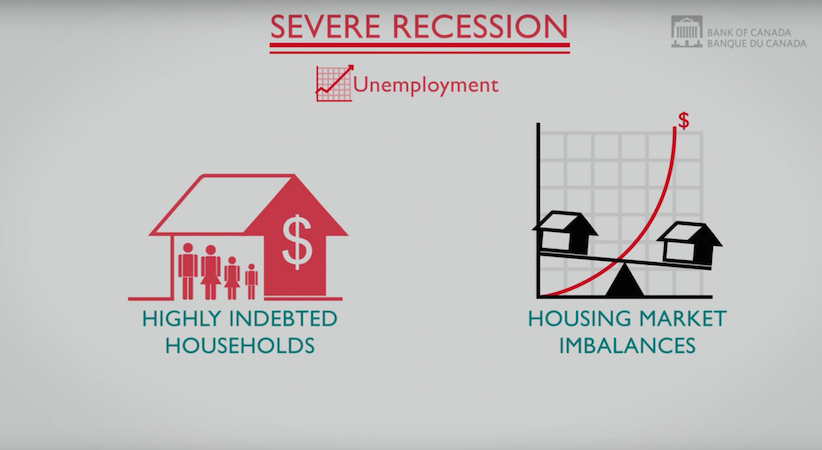 3. A lot of households, especially those carrying the heaviest debt loads, would have trouble meeting their debt payments. As a result, some households would start to default on their loans, and in turn, banks and trust companies would foreclose and try to sell those houses. 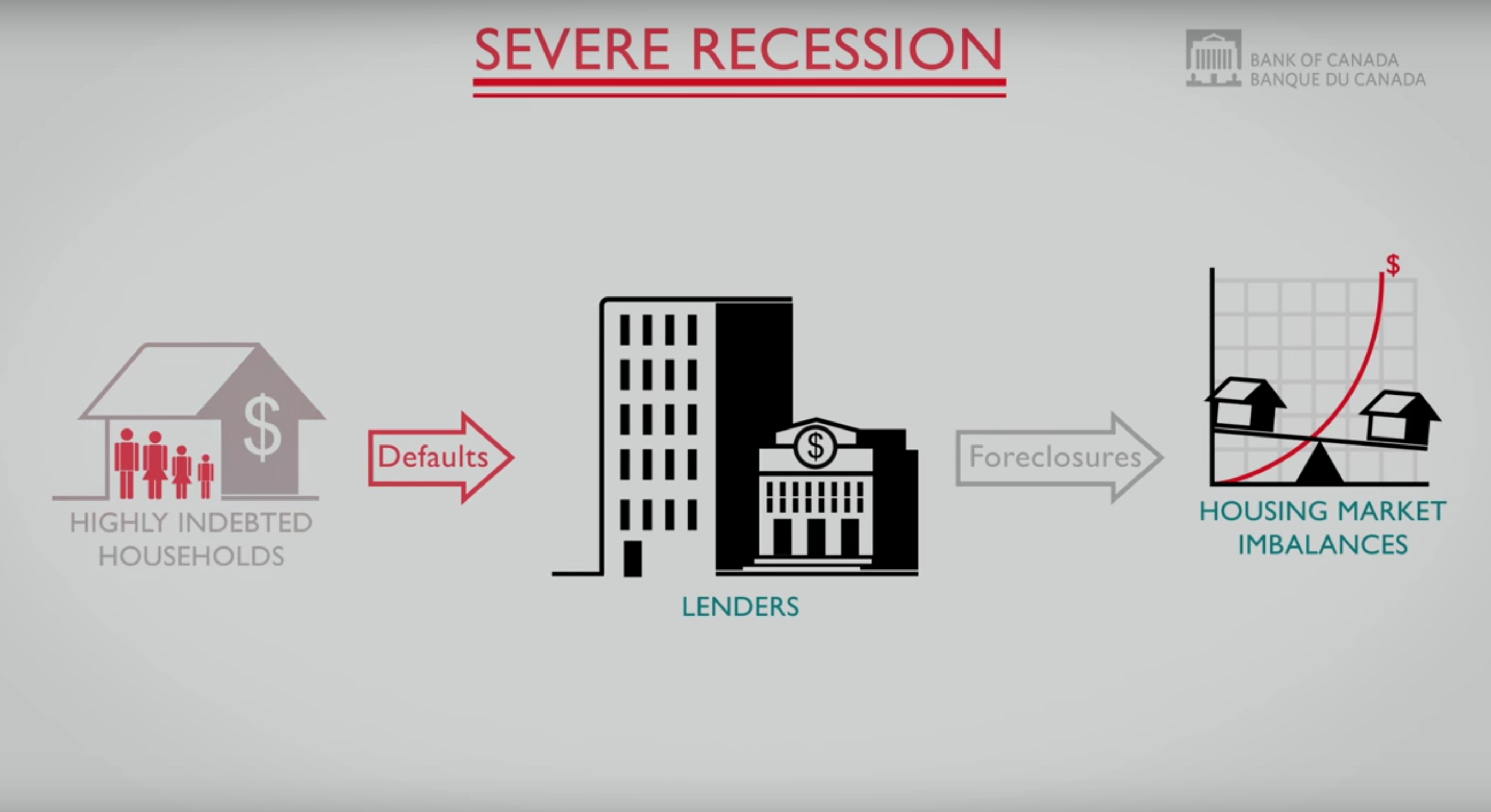 4. At the same time, with the economy slowing, new buyers would delay house purchases until the economy improved. Given the challenges already facing the economy, this could “cause a large drop in house prices.” 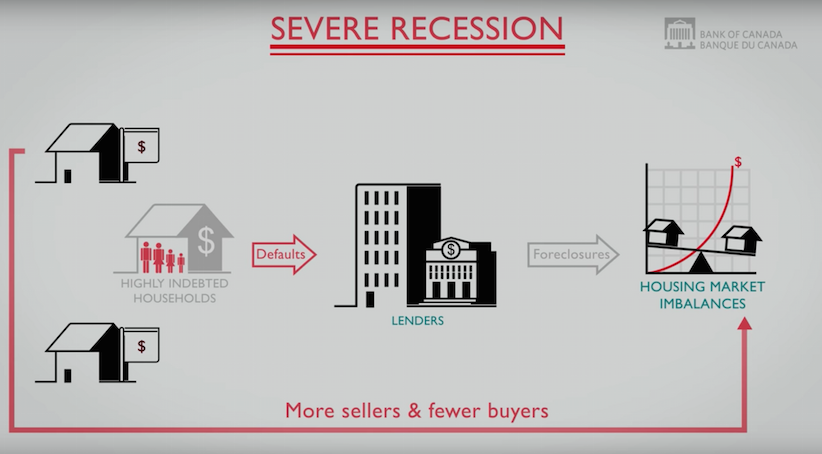 5. If house prices fell, it would push down household wealth, which has received a huge boost from the housing boom, and that could curtail consumer spending, which itself has become a primary driver of growth. The added stress on the financial sector would also weigh on the economy as lenders cut back on making new loans. Slive doesn’t use the term, but what he’s talking about is a credit crunch. 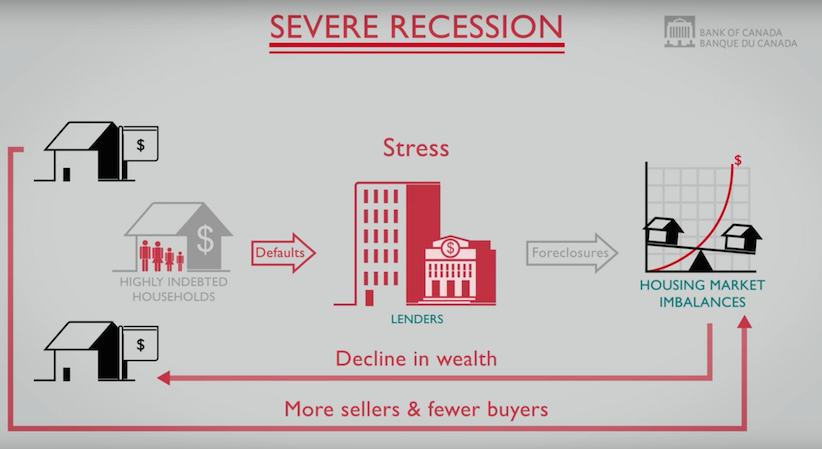 There is good news, Slive says. Stress tests show Canada’s big banks will be just fine even with a large drop in house prices. It’s also important to note that the Bank, in its financial system review, said there is a “low probability” of a sharp correction in house prices. But there’s no getting around the immense damage such a scenario would have on the economy.

The video is a break from regular fare on the Bank of Canada’s YouTube channel, which is largely made up of speeches by top Bank officials. And even if Slive’s delivery is trademark central-banker dry, the message is stark, and shows the Bank is desperate for Canadians to heed its warnings on debt and rising house prices.

If there’s one quibble to be made, it’s with the initial domino that the Bank sees setting everything in motion—a severe recession leading to job losses. Since the U.S. housing bubble popped and that country went into its long, dark funk, a chicken-versus-egg debate has raged over whether the housing collapse triggered the U.S. recession, or whether something else, like soaring oil prices, brought on the recession and turned the housing slowdown into a total collapse. What’s beyond debate is that America’s housing market reached its frothiest in mid-2006, and then began its decline, one-and-a-half years before the recession began.

Whatever the case, the Bank’s video should be another wake-up call for Canadians. Not that anyone’s listening. On the morning of Dec. 20, the video had little more that 600 views. (Update: Since this post was published, the number of views has jumped to more than 20,000.)

Here’s the video in full.