The closer you look, the weaker Canada’s job market appears

Depending on who you listen to, Canada’s labour market is either incredibly strong or it is in freefall. Both sides of the discussion are armed with data to support their argument. Who should we believe and which datasets provide the most accurate picture of the state of the labour market?

A few days ago I was listening to a caller on an AM radio show promote the government’s economic record by stating that there are more Canadians with a job today than at any point in Canada’s history. This claim is backed up by evidence. 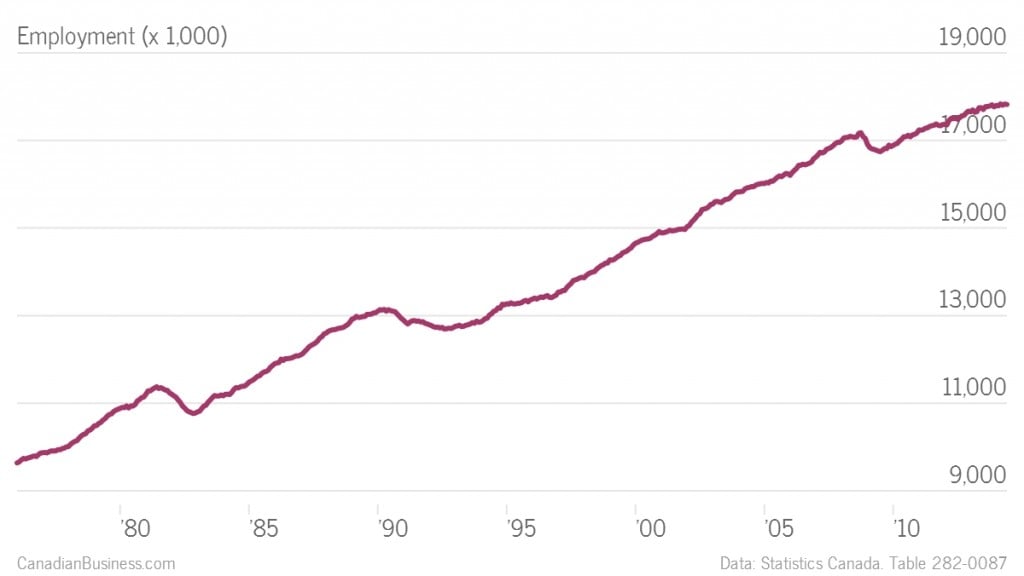 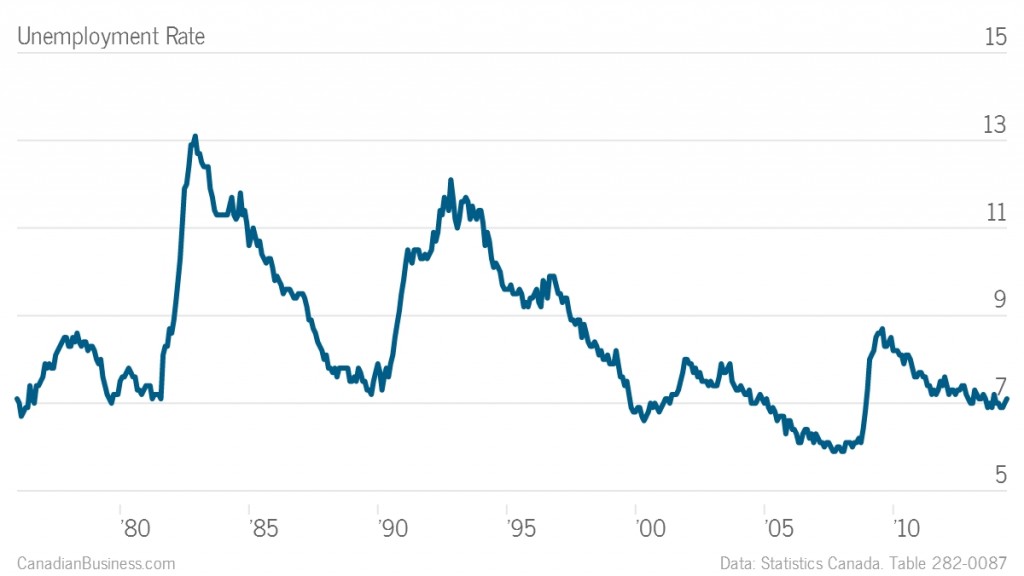 To be considered “Unemployed” a survey respondent must not have done any work for pay during a particular week of the survey month, must be available for work, and—most crucially—must have done something to find a job during the last four weeks.

To account for population growth, we can use the employment rate, which measures the percentage of the working age population that has a job. Canada’s employment rate fell during the recession and has recovered little since. 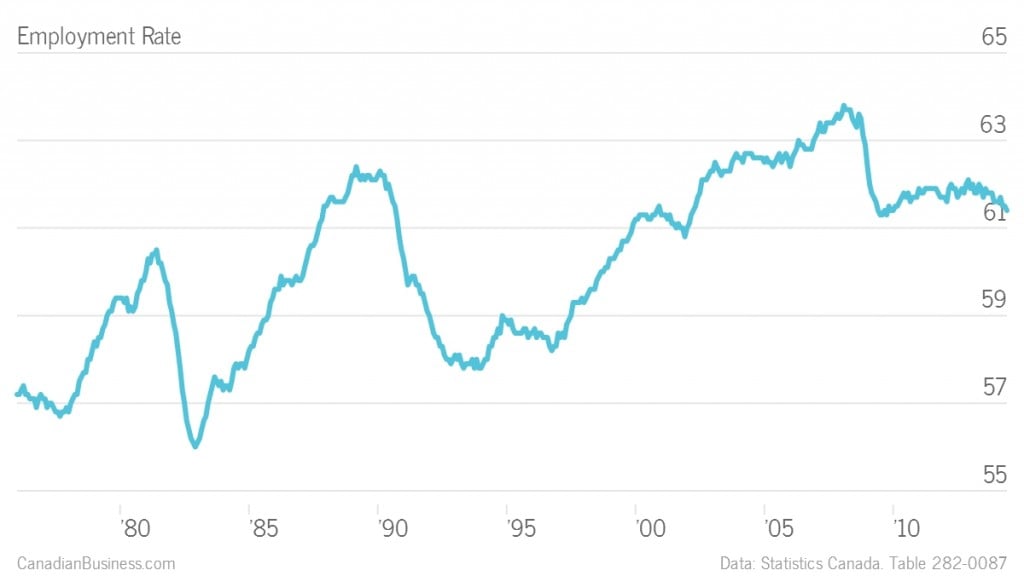 Like the unemployment rate, the employment rate is a useful but imperfect measure. Canada defines the “working age” population as anyone “15 years of age and over.” As such, it includes everyone from Grade 10 students to 95-year-olds. A country with a lot of young people or a high proportion of seniors will tend to have a lower employment rate, so this metric is affected by both economic conditions and demographic shifts such as the baby boomers entering retirement age. We can control for this by limiting the discussion to “prime aged” workers.

To control for demographic effects, we take out groups that are often still in school (24 years and younger) or can potentially enter early retirement (55 and up). There are other endpoints we can use, but limiting the discussion to 25-54 year olds is the most common approach. Under this measure, the employment rate is at a near all-time high. 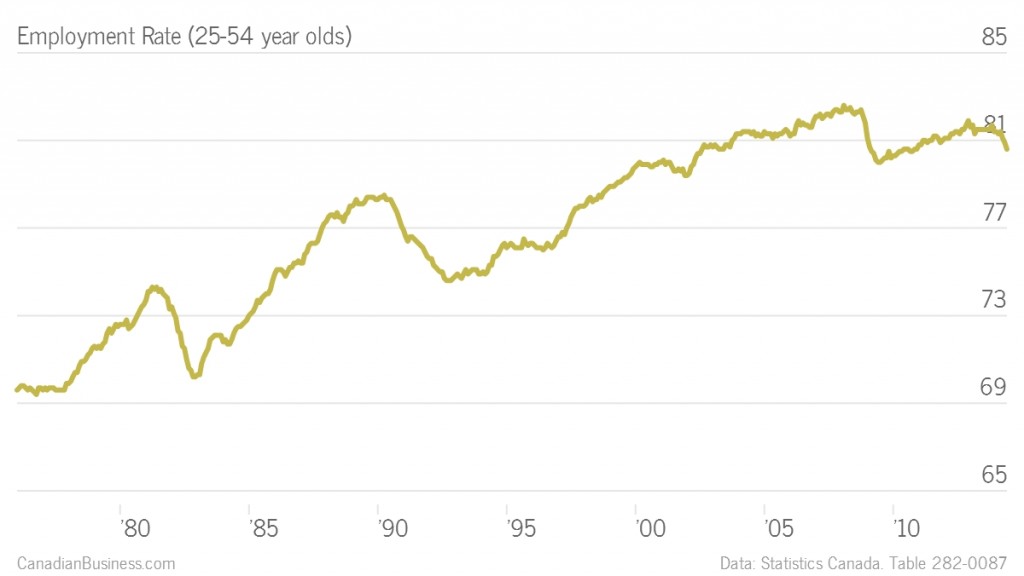 This measure would seem to imply that the labour market has consistently improved over the last 40 years, which seems unlikely. What is largely being captured in the 25-54 year old employment rate data is the increased number of women in the workforce.

One of the most important social trends since World War II is the percentage of working age women in the workforce, which has doubled in the last 50 years. 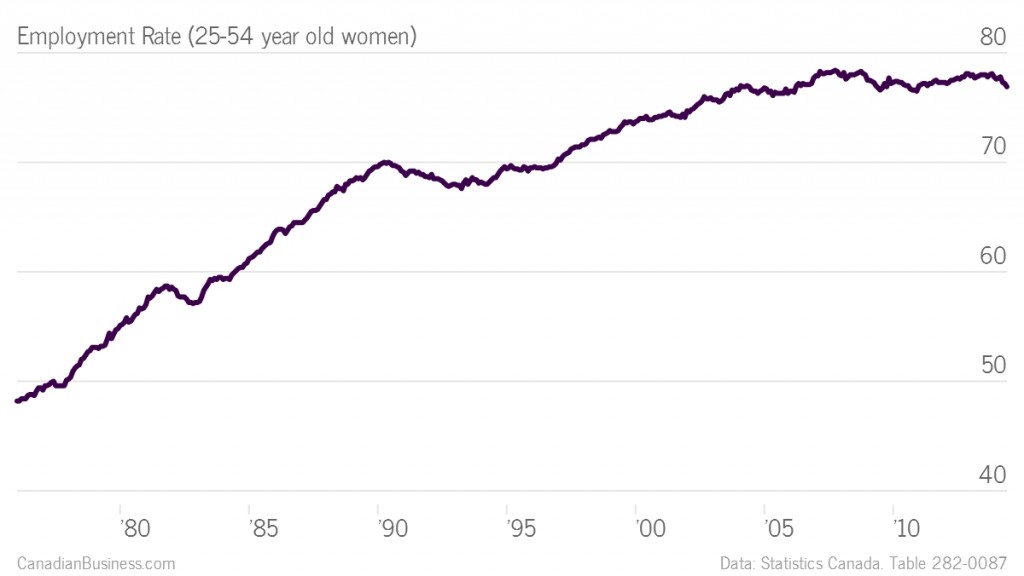 The employment rate for 25-54 year old men fell during the recession, recovered somewhat, but has been flat over the past few years. It is currently at 84.4 per cent, a level well below Canada’s 1999-2008 average: 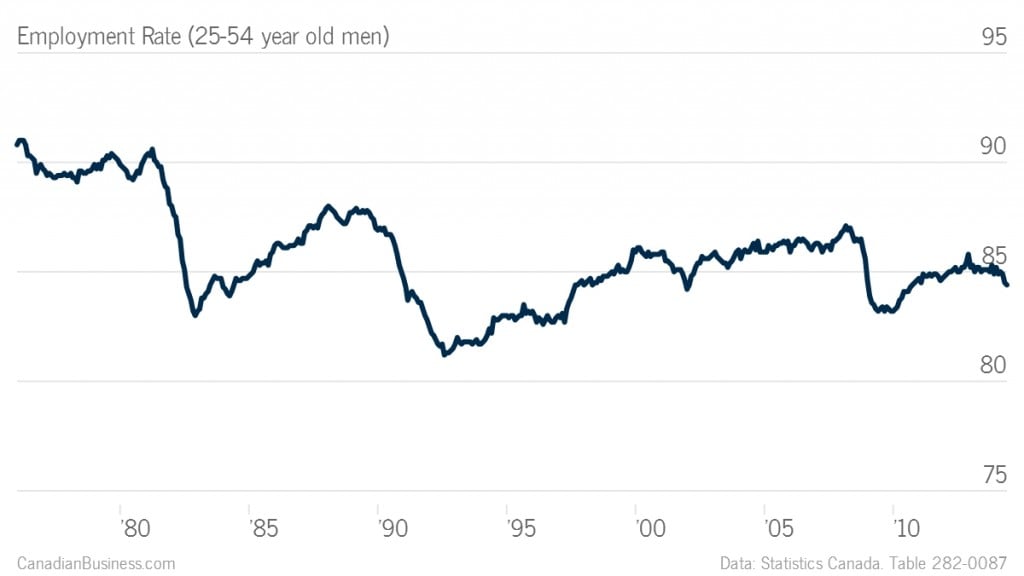 There are still a number of other factors we have not accounted for, including job quality. We should account for the possibility of underemployment, where people who could work a full-time job are only working part-time due to the weakness of the labour market.

If we restrict the analysis to 25-54 year old men that have a full-time job, the picture changes somewhat. Outside of the 1992-97 period, the employment rate for this group has been at lows not seen in the nearly 40 years of data that is available: 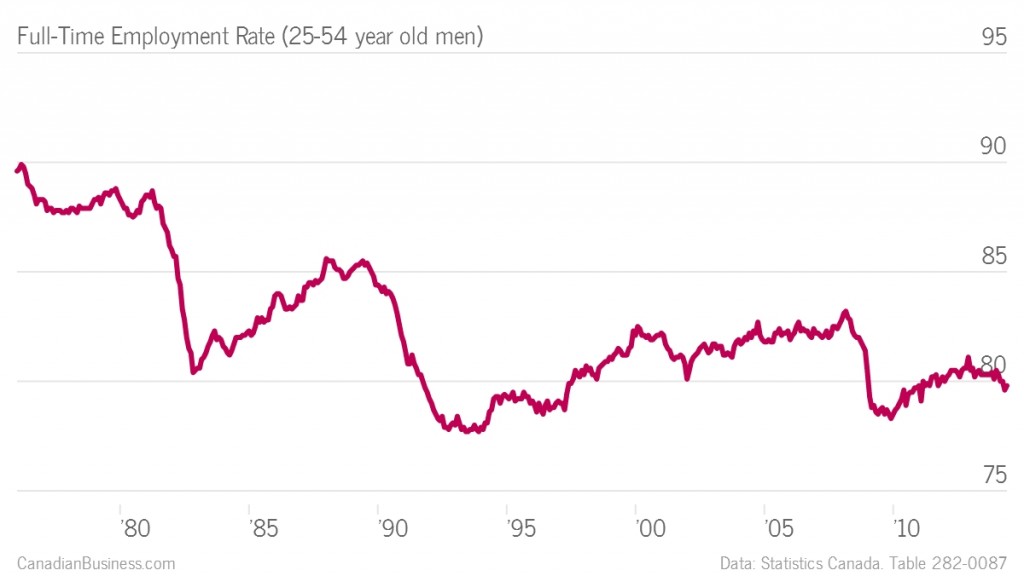 If I were limited to a single metric to use for the health of the labour market, I would use this one. But limiting ourselves to one measure is ill-advised. There are a number of factors we could still control for, such as the ratio of new Canadians to those born here. We have said nothing about wages and the labour market struggles of new graduates and women are important and not captured here. But to properly analyze the health of the labour market, we need to control for demographic, population size, nature of work and social changes. Simply citing the unemployment rate or the number of people with a job is not enough. But by controlling for these factors, we see that the Canadian labour market is not particularly strong.