The Conservative and NDP platforms are starting to take serious shape 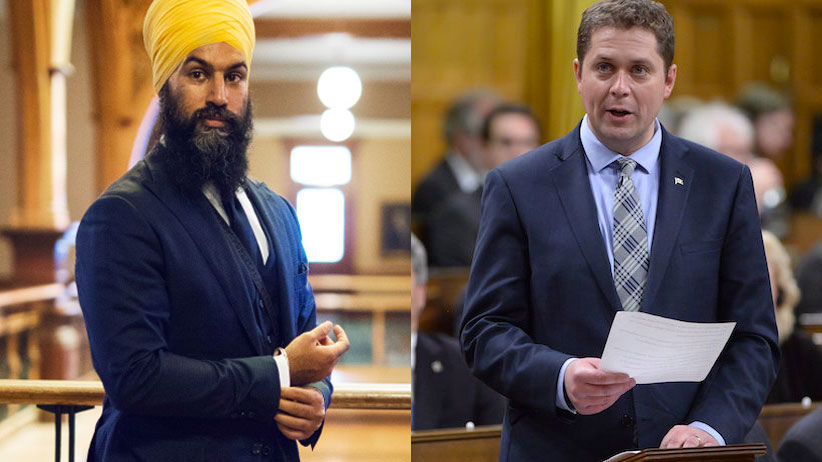 A typical U.S. Senator has about 50 staffers, including several legislative and policy experts in the Senator’s areas of concentration. Canada’s Parliamentary opposition parties can only dream of staffing on that scale, with the number of policy staffers countable using just one hand—often with fingers left over. So, Canada’s opposition parties must deal with a real lack of resources when trying to develop new policy initiatives.

But, with an election just over a year away, the opposition parties are making do with the scant resources they have and starting to release their first policy initiatives. The Liberal government will get lots of attention with their upcoming budget, so let’s instead shine some light on the policy direction the Conservatives and NDP are taking.

In recent weeks, the Conservatives introduced two new policy initiatives in the form of Private Members’ Bills on the taxation of parental leave benefits and on facilitating workplace participation by Canadians with disabilities. While the response to the Conservative initiatives has been mixed, two things stand out to me as a policy wonk. First, they got the policy ‘nuts and bolts’ right.  The numbers add up and the legislative approach is coherent. Second, there are clear signs the Conservatives are reaching out to external experts to seek help with policy, as evidenced by the backgrounder released by Conservative Shadow Finance Minister Pierre Poilievre.

READ: Why Conservatives and the NDP are fighting over the ‘working class’

It’s true these policy offerings have been ‘small ball’ so far. But, if the Conservatives have now learned how to build coherent policy with the resources available to them as an opposition party, I think it bodes well for the platform the Conservatives will offer Canadians in 2019.

What about the NDP? In a recent long-form interview with Maclean’s Paul Wells, NDP Leader Jagmeet Singh laid out an ambitious vision for economic policy under a future NDP government. The NDP envisions a social safety net extended to cover drugs, dental, and eyecare. Moreover, with a rejigging of seniors benefits and income support for Canadians with disabilities, Jagmeet Singh is putting together a policy package that strikes me as exactly what a social democratic party ought to be offering. No ‘small ball’ for the orange party. Instead, they’re putting together a big and bold expansion of social insurance that would have a material impact on the lives of struggling Canadians.

So far so good—Conservatives finding their policy sea-legs and the NDP focusing on big-picture social democratic projects. But what challenges do the parties face?

For the Conservatives, the biggest challenge is finding fiscal balance for their platform.  It seems likely the Trudeau government will head into 2019 with a smallish deficit in the range of $10 to $15 billion. This kind of deficit presents a real problem for Andrew Scheer. It’s going to be really hard to offer both substantial tax cuts and also balance the budget without resorting to fiscal trickery.

Of course, both tax cuts and budget balance are possible if Scheer takes a big axe to government spending.  The prospect of big spending cuts may please small-government conservatives, but recent Abacus polling suggests that most ‘gettable’ voters aren’t interested in pure austerity. Knowing this, Mr. Scheer is left hoping that the Liberals do the budget-balancing hard work before 2019, leaving the Conservatives plenty of easy room to cut taxes. I’m not sure that will happen.

READ: Conservatives might be cheering hardest for Jagmeet Singh

The NDP has different problems. While their spending plans may align with the dreams of social democrats around the country, the NDP has presented very few good ideas on how to pay for their big plans. Where’s the revenue coming from?

Mr. Singh has mentioned going after off-shore tax avoidance. The problem with targeting off-shore tax avoidance is that it happens off-shore, out of the legislative reach of Canada’s Parliament. Mr. Singh may really prefer that Panama or the Cayman Islands change their tax policy, but I don’t see how he makes that happen with decrees issued from Ottawa. The Liberal government has already invested over $500 million of new money on fighting tax avoidance, and is fully participating in international efforts to scale back trans-national tax avoidance. Is the NDP’s platform to be built upon the bet that the Liberals have left some easy billions lying around just waiting to be scooped?

The other idea floated by Mr. Singh is to change the taxation of stock options for executives. I think this is a good idea in principle since it makes sense to tax all compensation in the same way, whether it be wages, salaries, or stock options. However, if stock options are put on par with wages and salaries then firms will get a tax deduction when stock options are issued just like they do with wages and salaries. (Lindsay Tedds explains all the details here.) This firm-side deduction would wipe out most of the extra tax revenue, leaving the NDP billions short of what they would need to fund their ambitious plans.

Overall, I think both major opposition parties are off to a good start with their policy development for the next federal election—but there is work still to do. Taken together, the Conservatives look to be building a credible plan that lacks ambition, while the NDP’s plan is ambitious but lacks credibility.  But, there is still lots of time for the opposition parties to mount an effective 2019 platform, which will mean all Canadians can benefit from credible and diverse choices at the ballot box.