The economic lessons for today in The Cosby Show pilot 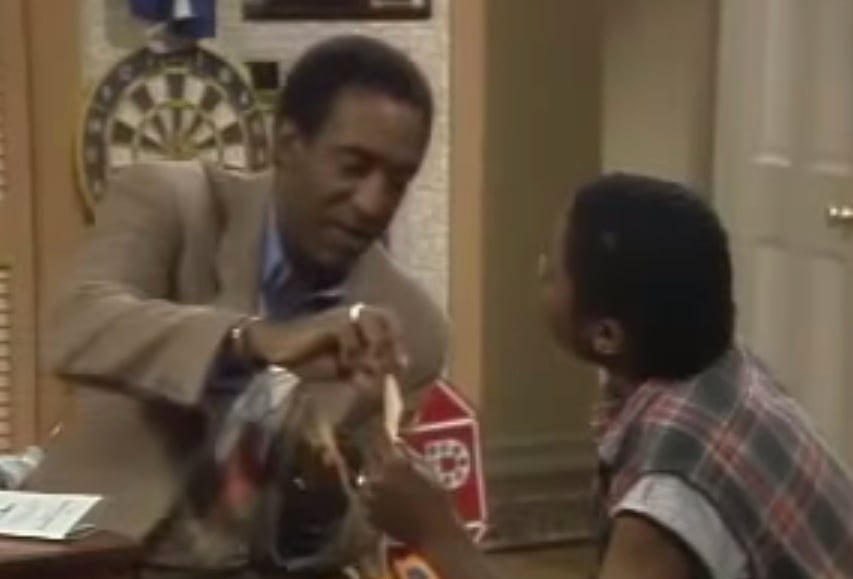 As Jaime Weinman writes here, Sept. 20 marks the 30th anniversary of the pilot episode of The Cosby Show. Aside from the chance to re-examine Cosby’s comedy genius, that first episode also offers some intriguing—and disheartening—lessons on inflation, its destructive effect on savings, and the economic stagnation plaguing low-income Americans.

Watching older TV shows or movies can be jarring when the matter of money arises, because so often the amount of money that characters steal, spend, get paid or daydream about seems so underwhelming. This isn’t the same as the chuckle one gets when plot lines revolve around answering machines or Palm Pilots. People inherently understand technology changes fast. But with money, it’s different. The currency is the same—we’re still talking dollars—but our frame of reference for its value is lost in the fog of inflation, which over time erodes what a buck will get you. At the same time the massive run-up in incomes of the one per cent, skyrocketing corporate revenues and mountainous government debt levels have inured us to really big dollar figures. A trillion is the new billion, just as a billion was the new million not all that long ago. (Interestingly, you can see this evolution in the use of the words million, billion and trillion over time in the New York Times.) So while in 1985’s Brewster’s Millions it was all Richard Pryor could do to spend $30 million in 30 days, today he could simply do this, this and this.

This diminished-dollar effect plays out when watching The Cosby Show pilot, entitled “Theo’s Economic Lesson.” In the episode, Cliff Huxtable confronts his son Theo about his terrible grades at school and the difficulty Theo will have getting into college unless he improves. Theo assures his father that his grades won’t matter because after finishing high school, he plans to “get a job like regular people”—to which Cliff, using play Monopoly money, schools Theo in the economic realities of the working class.

First off, here’s a clip of the scene from YouTube.

Cliff’s lesson for Theo is even more valid in 2014 than it was in 1984, once we update the dollar figures and information for today’s world. Because you quickly realize that, as challenging as the hypothetical grind Theo faced back then was, it would be a cakewalk compared to today’s reality. Let’s go through their back and forth piece by piece. (I’ve condensed some of the dialogue.)

Theo: Yeah, you know, work in a gas station, drive a bus, something like that.

Cliff: What kind of salary do you expect for a regular person?

First, let’s assume Theo took a job at a gas station attendant in New Jersey, which is where he planned to live to save money.  Now let’s see how he’d be doing today. According to Salary.com the median monthly pay for a service station attendant in Jersey City is just over $2,000.

In absolute terms, that’s a 68 per cent jump over 30 years, or the equivalent of getting a 1.8 per cent raise each year. Which is pretty crummy. Except it’s far worse than that, because to simply keep up with inflation, Theo would need to be earning more than $2,600 in that job today. In real terms, Theo the gas station attendant would have taken a sizable pay cut.

Cliff: I will take $350 for taxes, because see, the government comes for the regular people first.

As far as personal income taxes go, Theo would be better off today than in 1984. Based on his annual pay of $22,240, after deductions and exemptions he would pay no income tax. But he’d still pay payroll taxes, which have risen, so it might be a wash.

Cliff: “You are going to have to have an apartment because you’re not going to live here. So an apartment in Manhattan will run you at least $400 a month”

Let’s put aside the likelihood that Theo would still end up living at home, since according to Pew Research 36 per cent of young adults in America aged 18 to 31 now live with their parents. The average rent for an apartment in Manhattan was more than $3,000 last year (Subscription needed). A one-bedroom was cheaper, but still $1,900. That would be more than Theo’s monthly pay. Good thing he moved to New Jersey, where the average price for a one-bedroom is $1,600. Of course, that would still leave Theo with only $3,000 for the year for every other expense in his life.

On clothing and shoes:

Cliff: Figure $100 a month for clothes and shoes.

This is the about the only area where Theo would be ahead. Prices for clothing and shoes have fallen steadily over the last couple of decades, thanks to cheaper imports from China and elsewhere. On average, American spend $56 a month on men’s clothing and shoes.

Cliff: So what does that leave you with?

Cliff: There is a problem. You haven’t eaten yet.

Theo: “I can get by on baloney and cereal”

If he eats nothing but baloney and cereal he might, just might, get by, though his medical expenses due to sustained malnutrition would probably wipe everything else out. But if Theo reverted to the American average, he’d be spending $151 in just one week on food.

Theo: So I’ve got everything I need plus $200 left for the month.

Cliff: “You plan to have a girlfriend?”

Cliff takes the rest of his money. Some things don’t change.

So that’s “Theo’s Economic Lesson,” 2014 edition. He’d be earning less and spending more. In the end Theo realized he’d be best off if he attended college. But before wrapping up this lesson, here’s another little fact: the average student in America now carries $29,000 in debt.

Good thing he was lucky enough to have a doctor and lawyer for parents.